How my website performs in mobile searches on smartphones is increasingly different to my desktop performance. Particularly now that Google has announced it will release an update on April 21st, which will have a significant impact on websites that are NOT mobile friendly. According to Google Webmaster Trends Analyst Zineb Ait Bahajji the coming Mobile Update will have a much stronger impact then any Panda update!

As a marketer, I now have to know how big this difference will be on my domain and where there is specific room for optimization. Because if the traffic from mobile devices continues to rise, and the wheat separates from the chaff, then I have only a few possibilities to find out the following points:

It is therefore even more important to have a basis of comparison in which the specific difference between my Desktop and Mobile Visibility can be recognized. Our new Beta-Version is now live providing you first indications on the Visibility difference:

At Searchmetrics we have been working on search differences between mobile and desktop for years. Therefore, we already collected & analzyed data last year for providing facts about differences of the Mobile SEO Ranking Factors. The split between mobile and desktop search results is measurable. At our last Mobile Ranking Factor study in 2014 the difference of URLs between Desktop and Mobile index was already 36%.

It’s for this reason that we have been tracking the same keywords for months in the mobile area as we have for desktop searches. This is, firstly, to see how the results keep differentiating more and more (which they definitely do) and, secondly, with the intention of giving our users the opportunity to have more evidence for their optimization.

Comparability of Desktop and Mobile Visibility

The starting problem is: Desktop and Mobile cannot really be compared and analyzed to one another under real conditions. In the mobile area, there are different click-through-rates, search volumes, user intentions and the influence of local parameters on the search results is different.

Nevertheless, we want to make a comparison between Desktop and Mobile index possible and have converted our calculation of the normal SEO Visibility – which is based on a dynamic CTR calculation by machine learning algorithms – 1:1 to mobile. Why? Because we consider it to be intrinsic to prepare a mutual basis as a KPI in the form of this comparison. Especially to see how the performance is now and how it will change at April 21st.

The Mobile SEO Visibility will be updated weekly.

We have decided on an Android smartphone as a user agent. Differences between iOS and Android can occur, but in my opinion they are irrelevant, as the only differences that I have previously witnessed occur in queries for apps. For example, if you search for ‘netflix’, the Apple App Store ranks on an iPhone, whereas the Google Play Store ranks on an Android. This is also the reason why apple.com and google.com show such great deviations in Mobile SEO Visibility. Other than this, there have not been any further relevant differences between these domains so far.

Mobile SEO Visibility with desktop comparison at a glance 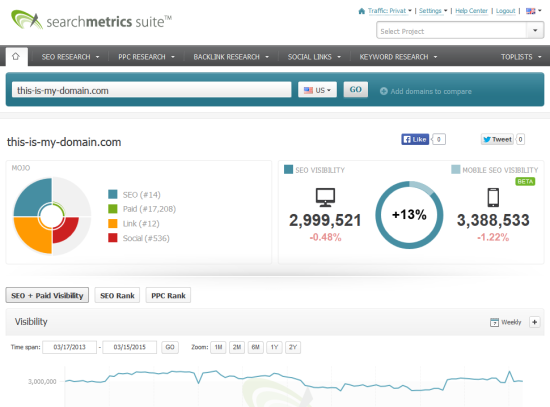 The rank overview, which was previously displayed across the entire page width, has moved to a closed circular graphic on the left side – in favor of the new ‘Desktop vs Mobile’ KPI. By the way, we have dubbed this circular graphic ‘mojo’, as in Austin Powers, as it shows at a glance how much mojo a domain has in a respective country and which channel works best!

We have also pre-calculated the Mobile SEO Visibility on all subdomains so that you can see how a mobile subdomain, such as en.m.wikipedia.org or m.imdb.com, performs.

The new KPIs and possibilities at a glance:

This ‘Desktop vs Mobile’ KPI offers the simplest way to create comparability between Desktop and Mobile Visibility performance. In order to ensure this comparability, we work with identical CTR calculation and search volume on the basis of desktop values.

We know that both CTR and search volume differ in the mobile area. We have already been working with mobile data for years and have even offered mobile rankings in the project area of our Suite since June 2013. Therefore, we recommend this new Mobile SEO Visibility (Beta) only be used as an indicator in order to understand how the performance between mobile and desktop differs.

For deeper analysis it is recommended to add projects and campaigns to the project area of the Searchmetrics Suite and to work with actual mobile data. In the project area, you can specifically add campaigns for cities, which more closely corresponds to the behavior of mobile users. If you aren’t yet a customer of our Suite, you are invited to talk to an account manager and get a demo version.

Specific analyses in the project area

For an optimum mobile measurement of performance, individual, local rankings for mobile with individual mobile search volume are necessary. We offer this data and functionality within the project area in the Searchmetrics Suite using more than 800 search machine/country/device combinations.

The new ‘Desktop vs Mobile’ KPI can been seen as the starting point for recognizing how big the overlap between my Desktop and my Mobile Visibility is. Furthermore, the trend shows at a glance how my performance has recently developed. Due to the fact that this KPI is part of the research area, all users of the Suite benefit from this update, which spans not only the SEO but also the PPC area.

In order to be prepared for April 21 – Google’s mobile update – and thereafter, the tracking of concrete mobile rankings is required. This is already available in the project area of the Suite, taking into account also historical developments and individual data.

Check out the current status of your Desktop vs Mobile Visibility and start projects in order to track your individual performance.