If you haven’t heard of Bitcoin or the world of cryptocurrency, you’ve been living under a rock. The digital currency craze has moved out of the shadowy world of money launderers and other bad actors into the mainstream. Now, cryptocurrencies are just about on everyone’s wishlist as a means for getting rich quick. In our latest Memo to the Modern Marketer, we delve into how cryptocurrencies really could become a cash cow for savvy marketers. 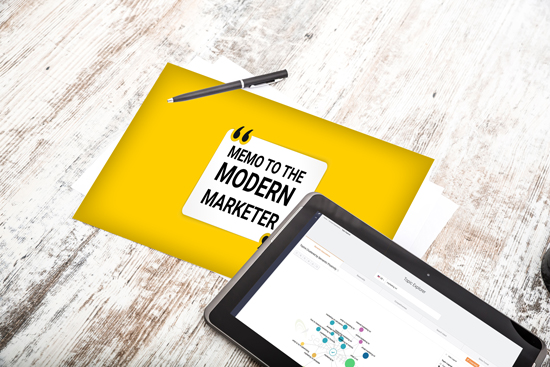 Fire, Fury and a Digital Craze

Let’s face it, cryptocurrencies are a hot topic. In 2017,  JP Morgan CEO Jamie Dimon publicly called Bitcoin a fraud and threatened to fire any of his employees found trading the cryptocurrency. South Korea and China reportedly are threatening to ban trading in all cryptocurrencies. The Chicago Board Options Exchange in December unwrapped futures trading on the digital currencies. Just this month, Eastman Kodak Co.’s shares skyrocketed when it announced its own cryptocurrency, while others tumbled at the same time.

So are cryptocurrencies the future, or an exercise in futility? 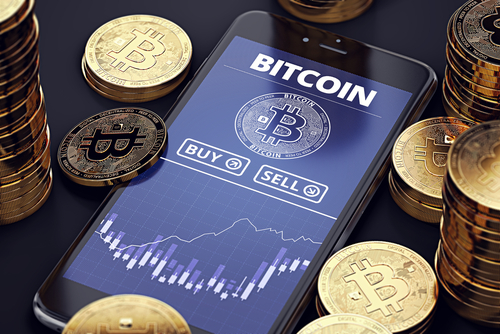 Amid red-hot debate about whether it’s a bubble or balloon, the $370 billion market cap for all cryptocurrencies including Bitcoin, recently surpassed that of Goldman Sachs and JP Morgan. Now trading in the low five-figure range, Saxo Bank global macro strategist and famous Bitcoin bull Kay Van-Petersen predicted to Bloomberg in December that Bitcoin prices will hit “$50,000 – $100,000 within the next six to 18 months.”

Bitcoin is not just reflecting the ups and downs of the mainstream economy. It represents a new way of doing things. Marketing is at the center of that.

Big Data and social media interactions are the new oil. But how do you measure their value as the new basic unit of the world economy? Saoud AlHumaidhi, who is launching a cryptocurrency fund in Kuwait,  in a YouTube video explains how the internet will become an economy of value, where people are assets and their transactions are currency.

At this point for marketers, it might help here to define Bitcoin. It is not ‘money’ in the traditional sense. It is a time-stamped, encrypted ledger called a blockchain that records online transactions, with economic and social media values, as well as data connected to those actions. In that sense, Bitcoin and other cryptocurrencies can bring a lot to the marketer’s toolbox because marketing today creates value around relationships and how well you connect, directly or indirectly, to others.

While some were shocked to note a recent Deutsche Bank study that suggests the most interesting aspects of Bitcoin lay in its blockchain and applications that can arise out of them, the view omits the true value it offers. Cryptocurrencies equal blockchain plus community.

Bitcoin guru Andreas Antonopoulos famously stated: “Bitcoin is the internet of money – and currency is only the first application.” He has argued for years that Bitcoin lets developers rethink how things work in our entire system.

In this new paradigm, each cryptocurrency has many different applications besides financial ones. You can vote electronically with Bitcoin, build global stock markets, crowd fund, reinvent trust mechanisms, and more. You can store information on the blockchain with your authorship and a provenance that can never be refuted.

Bitcoin and other cryptocurrencies are rarely also discussed as a marketing tool that measures the value of earned media, and eventually the value of all business interactions and social traffic on the internet.

That’s where cryptos are going. A cryptocoin’s value potentially measures the value of the internet itself – and every single conversation and transaction – a never-ending ambient sociality that takes place online. Every community and every brand can have a cryptocurrency and blockchain that suits their purposes, and the blockchain will measure the value of consumers’ online lives and interactions.

As decentralized technologies, cryptocurrencies have no other authority with which they are affiliated. While governments are attempting to control Bitcoin, in principle there is no central institution or regulatory body with authority over Bitcoin or other cryptos. All there is is the technology. If one coin dies, another arises as a cloned version of the same technology, but with different branding, reliant on the strength of its developer team and supporting community. The way a coin survives online, primarily through trades in the exchanges, and chatter on social media, is as a pure, earned media entity.

Thus, for all the talk of bitcoin being a trustless network, it works with people, and it is an economic value mechanism that is directly connected to social media activity. Bitcoin’s value measures how well the coin does online in individual peer-to-peer transactions and communications. If the Petrodollar was once the standard for global trade, cryptos are the Social Media Dollar.

Each cryptocoin is connected to one or more online communities and related initiatives and businesses, and to the coin’s communications, development strategies, and branding. Dogecoin was the best early example of this.

In 2014, Dogecoin proved that pure branding and social media traction could combine in measurable, earned media value in a cryptocoin. It used memes and online viral chatter to build value. Its tech was minimal. It was just a Bitcoin clone. But its branding was fantastic. It started in Australia not as a financial scheme but as a branding joke about Bitcoin.

Posted in 2014 on Twitter by graphic designer Jackson Palmer, he asked what a cryptocurrency should have as its logo. A Japanese kindergarten teacher’s dog, a 2010 photo taken off her blog, went viral, and only then was Palmer’s dog branding paired with programmer Billy Markus’s cryptocoin.

The aim was to get away from Bitcoin’s dark underground reputation and to attach a friendly coin to a joke meme to make money. After that, Dogecoin’s community created a simplistic language that the dog would use to talk about the economy (“such profits”), which also went viral, and little slogans about the coin value (“to the moon!”). The coin appealed to kids who grew up during the recession and felt they faced impoverished futures. The dog promised them “riches” that would come “so easy.”

In 2014, a social media thread on Reddit about Nascar driver Jose Wise’s aim to get a sponsor for the NASCAR Sprint Cup Series race at Talladega Superspeedway morphed into a clarion call for Dogecoin owners. They quickly forked over $55,000 worth of the digital currency to sponsor Wise’s Ford Fusion.

That same year, Dogecoin backers raised $25,000 to send the Jamaican bobsleigh team to the winter Olympics.

On January 7, Business Insider reported that Dogecoin has a market capitalization over $2 billion.

Marketers need look no further than Kodak’s announcement to see just how fast business can change for the better with the right embrace of cryptocurrencies. In 2012, Kodak declared bankruptcy – a casualty of the switch from film-based photography to digital.

Kodak CEO Jeff Clarke turned the tables in January, embracing digital over real-world solutions (more precisely, embracing digital to create a real-world action plan to save Kodak). The company announced it had partnered with Wenn Digital to create a photo-centric cryptocurrency called KODAKCoin and a blockchain service called KODAKOne.  The move would create a new marketplace for digital photographer, letting them manage rights and fee payments for their photographs, with Kodak taking a cut.

The How-To Guide of Earned Media

Within hours of the  announcement, Kodak’s stock price doubled, jumping over 127% in value. And in a flash, suddenly Kodak was innovative again, helping all the independent micro-producers in an industry that sorely needed help.

The news flew across mainstream news outlets and social media, amplifying the initiative. The Financial Times saw this announcement as part of a trend; several companies are juicing their shares with what the FT calls a “blockchain pivot.”  On Google Trends, ‘Kodak’ and ‘Kodak coin’ and ‘Kodak blockchain’ were all breakout topics on the day of the announcement.

It’s important to see that Kodak did much more here than just provide Bitcoin or another crypto (its own) as a payment option. It didn’t just use crypto in a one-time marketing campaign.

Kodak used cryptocurrency technology to create a new economic ecosystem. Everyone knows that images drive content on the internet, and all those image producers would love to be able to tag their content with a rights statement and get paid. Make the process easy enough, and ‘producers’ could be everyday people who take photos and put them up on social media, and amateur photographers on sites like Flickr or Instagram – not just the professionals with their own websites or contributors to stock image sites.

Kodak located the online social community in its industrial sector, and with minimal effort, used blockchain and coin capabilities to build a new captive economy inside that sector, placing itself at the center of that economy. This earned media marketing masterstroke moves way beyond product sales, making that economy something worth investing in, because KODAKCoin’s value will represent the collective economic value of the entire photographers’ community it mobilizes. The initial coin offering sale (ICO) to fund the project takes place on January 31.

In a departure from cameras, Kodak also plans to get into the hardware side of cryptocurrencies. Crypto veterans were skeptical of Kodak’s related announcement that it will start selling Bitcoin mining rigs, mainly to profit the company. But even if that sideline fails, this example shows how Kodak has tapped the unbelievable power of earned media on the internet.

Kodak’s example – and others from companies as diverse as the Long Island Iced Tea Corp and Hooters  – show what happens when savvy marketers harness cryptos in earned media strategies.

It would be better not to think of blockchain-brand-boosting as a short-term gimmick and instead a new way of marketing.  With cryptos and blockchains, marketers can decide how to build a new social media ecosystem with embedded marketing and sales. The blockchain brings several new capabilities to that ecosystem, not least non-site-specific earned media functionality and profit for a brand.

Without having seen the product and its design, Kodak’s blockchain license tags for photos at least could have this potential capability: the cryptocoin and blockchain licensing app is downloaded to desktop or (more likely) mobile. The user takes a photo. No matter what site a user visits, they can upload, circulate and tag any personal photo with Kodak’s license and KODAKCoin fee payment for photo usage automatically and permanently embedded in the image. The brand will actively follow the photographer, then the unleashed photo, across the internet. If the photo is shared, a fee must be paid. If the photo goes viral, the profits increase virally.

The SEO Value in Cryptocurrency

Finally, with these tools, SEO and SEM tactics will become an even more important part of the strategy to improve the value of earned media.  If every piece of information about your company or marketing initiative can be embedded with branding and monetized before you set it loose on the internet, and you combine that with a plan to optimize that content’s visibility, your profits on the content as it travels online will predictably increase. In this case, Kodak has given only one example of blockchain marketing potential.

In other words, if you thought you couldn’t measure the value of earned media in SEM, consider Bitcoin technology as the tool to solve these problems and deliver clear, economically measurable ROI of social media relationships, one interaction on the blockchain at a time.