What do Netflix, ebates.com and thesun.co.uk have in common? They’re among the top 100 domains that enjoyed rich rewards in 2017. Which domains took the biggest hits in search Visibility? Searchmetrics in our annual Google Winners & Losers study dived into our data to uncover the top 100 winners and the biggest losers, analyzing their performance in the context of the most significant search trends and changes of 2017 – including Google Updates, mobile index and content quality. 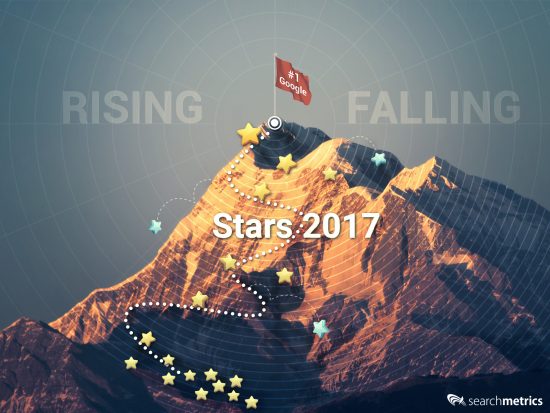 For this study, we analyzed the development of SEO Visibility for all domains listed in our US index tracked over the course of 2017. The list is ordered according to the absolute increase or decrease seen by the website, when comparing the level at the end of 2017 with that of January 1st. We have filtered out adult and illegitimate streaming sites, as well as domains that have migrated.

Publishers and encyclopedias were the SEO Visibility success stories of 2017. More than half of the top 100 winners on Google.com regularly publish articles on general interest topics, tech or video content as their core business. The runner-up category in 2017 was encyclopedias (including dictionaries, translation sites etc.), who saw enormous increases in their SEO Visibility over 2016.

What does it all mean? The cream rises to the top. Companies that focused on delivering quality content, either on differentiated and focused content or on the SEO structure of the site, saw big rewards in the world of Googledom.

Selection of Losers in 2017

In the following, we have identified several domains that fall into the loser category. These are sites that saw a severe drop in their organic visibility during the course of the year. Most domains included here have lost at least 20% of their visibility. However, this does not necessarily mean that the pages have also lost traffic or turnover; it is an indicator of how well represented these domains are in the organic (unpaid) search results of Google.com.

Winners and Losers by Industry

To identify the industries and relevant trends for the winners and losers whose Visibility on Google.com changed in 2017, we extended our industry and data sample. Instead of using the top 100 winners and a selection of losers, we have categorized the 250 domains with the greatest increase in SEO Visibility, and the 250 with the greatest decrease.

Publishers (media & events) made up 57% of the biggest winners in 2017, and 8% were shopping websites. The proportion of encyclopedias (including dictionaries) amongst the winning domains stood at 9%: 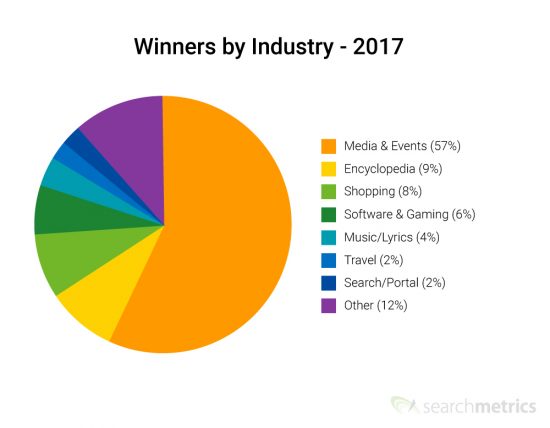 Of the websites that lost out in 2017, 44% are also from publishing (media & events), while shopping websites also comprise 12% of losers: 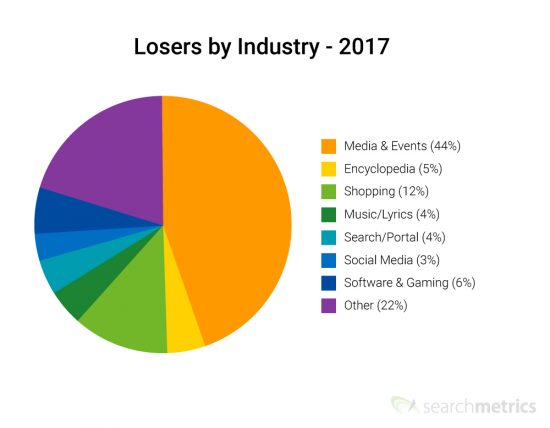 This shows that there has been much fluctuation within industries: 57% of the winners are publishers, but so are 44% of losers. It is similar with shopping websites. They make up 8% of winners but also 12% of losers. Another area represented in both categories is software/games: 6% of winners and 6% of losers.

Let’s now look at the differences and try to find out which industries really won or lost.

Google Updates, mobile-first index, content quality and ads. Here is a quick summary of the most important search trends of 2017, and an analysis of their impact on SEO Visibility.

The following graph shows the average SEO Visibility of the winners and losers on a weekly basis throughout 2017. We have included the most important Google Updates: 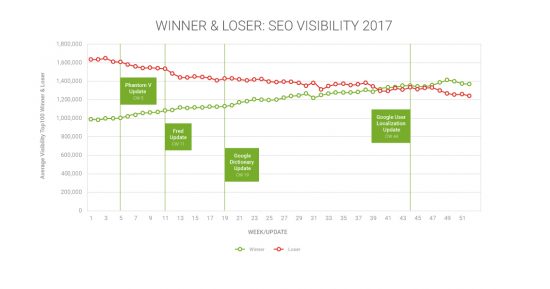 Phantom V Update: Though unconfirmed by Google, early February saw an algorithm update: Phantom V. The update targeting quality led to drops in Visibility – e.g. for foursquare.com – or significant increases – for domains like tvtropes.org. This update helped these websites take their place in the year’s top lists. Many websites affected by Phantom V had already been hit by earlier iterations of the Phantom, e.g. myrecipes.com:

As mentioned above, online enyclopedias and dictionaries are amongst the biggest winners of 2017 (besides publishers). The trend that has seen Google ranking these domains for short-tail keywords that do not have one clear user intent (e.g. to purchase) continued throughout the year. As a result, six positions in 2017’s top 10 list of winning domains are dictionaries. Here are a few examples of how selected encyclopedias fared in 2017:

Towards the end of 2017, these domains started to lose momentum, so we will have to wait and see what Google has in store for dictionary websites in 2018.

Losers losing even more on mobile

Our analysis of 2017’s best performer shows that investing in high-quality content that perfectly serves the user intent is a great way to be rewarded with top search engine rankings. One highly noteworthy development this year: about.com is history. The internet pioneer of yesteryear, with its archetypal content farm, has been on the downward spiral for several years now. The domain often had many texts on the same topic with a similar format: max. 300 words, not very useful, optimized for a highly specific (long-tail) keyword phrase.

Now: A succesful relaunch and split into five separately branded vertical sites has been completed. The new sites include Verywell (Health), Lifewire (Tech), The Balance (personal finance), The Spruce (home and food) and ThoughtCo (education). And the new umbrella brand is now called dotdash.com.