Postcards from China – Journey to the West

Why should companies and marketers target the difficult Chinese market directly when other Asian countries also have plenty of potential customers?

China is one of the few countries in the world where a search engine other than Google dominates the market. But it is not the only Asian country with exciting customer acquisition opportunities for western firms. In a “Journey to the West” (seen from China’s perspective; *Editor’s note: allusion to a piece of classical Chinese literature in which a Chinese Buddhist monk and a small group of adventurers, including the monkey god Sun Wukong, embark upon a mystical journey to India) we are turning our attention to India, one of the most populous countries in the world after China.

More than 1.38 billion people live in India – a country with a very young population with an average age of 28. 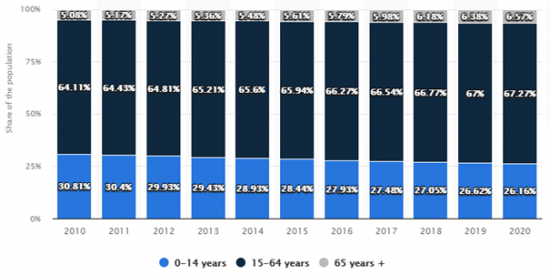 Of these 924.6 million people (or just under 1 billion people if you count the population aged 15 and over, including the older generation), only 45% (624 million) use the internet. 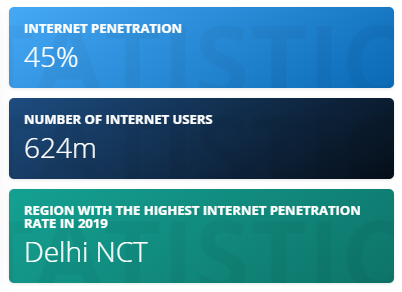 As in China, there are already many potential online customers, with high annual growth rates. In 2007, as few as 4% of people in India were online – by 2021 this figure had reached as much as around 45%.

In 2019, there were around 290 million internet users in rural areas and 337 million in India’s urban areas.

Cell phones are a common way of accessing the internet thanks to cheap cellphone plans. According to current estimates, 450 million people will be using social networking services by 2023.

Thanks to cheap cellphone plans, most internet users in India use smartphones to access the internet. Desktop access is more widespread in offices, organizations, and among students (in schools/colleges). When it comes to internet research, Google is clearly the most commonly used search engine, with a current market share of 98.88%, ahead of Bing and others.

What language is used most on the internet in India?

India was once ruled by the UK and, as a result of this legacy, English is an official language used by the government alongside Hindi.

However, a total of 22 different languages are spoken by populations in the different regions of India. For example, Gujarati is spoken in the state of Gujarat. Hindi and English are also spoken, read, and understood in the respective states.

The internet user base in India is largely English-speaking. The 100 most visible websites in India are: 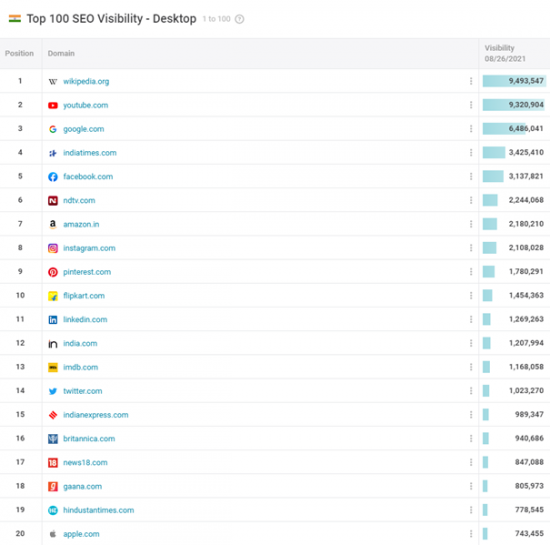 Recently, however, there has been an increase in regional-language web portals. These have since become well established, and are rapidly growing in number thanks to millions of dollars from investment giants. These portals are quickly becoming the unicorns of the future.

Most Indian states have their own online daily newspapers in the local language with a prominent readership. WhatsApp, Facebook, Twitter, Telegram, and other platforms are also used for content marketing in local languages.

Printed newspapers are still a popular way for the older generation to keep up-to-date with the latest news and information. But this section of the population (especially the educated classes) is also switching to online news sources for faster, easier access to information.

The publishing industry is thriving online, especially in India’s smaller and tier 2 cities. A new range of online news portals is emerging from these regions. Thanks to cheap domains, hosting, and of course WordPress, smaller cities have also created their own news portals.

Chart: Some of the news websites in India with the highest SEO visibility. Source: Searchmetrics.com Research Cloud

Indian users are more inclined to follow trends in the US and other western countries than those in the Asian world.

The eCommerce sector is growing at a serious pace in India. In 2017, eBay India was acquired by eCommerce giant Flipkart. In 2018, however, the cooperation was terminated, and eBay was relaunched in India with a new avatar. The eBay India eCommerce portal, which initially focused entirely on the Indian market, is now offering domestic sellers cross-border sales opportunities as well.

Thanks to its customer-centric policies, Amazon India has captured a decent share of the market, with Indian business growing rapidly following major investment.

Some of the most visible eCommerce platforms in India. Source: Searchmetrics Research Cloud

Amazon India, Flipkart, Myntra, Snapdeal, IndiaMART, FirstCry and ShopClues are some of the most popular eCommerce websites among Indian customers (B2C).

Running your own eCommerce website has also become a trend in India. Several smaller and industry-specific eCommerce portals are becoming increasingly popular with customers.

So, it depends on your strategy, available capital, market knowledge, product knowledge, and how much users trust you.

Foreign companies have a good chance of getting a slice of the cake: Indian buyers love to purchase quality products from overseas brands. The main reasons are quality and durability.

US and German brands are in particularly high demand, with German car manufacturers Volkswagen, Porsche, Audi, BMW, and Mercedes-Benz among the most popular premium car brands. US companies have a sizeable market share in every segment in India. Facebook, Google, Apple, Amazon, Coca-Cola, Ford, Citibank, Pepsico, Pfizer, Gillette, and Cognizant are just some of the companies represented in India.

However, it is worth remembering that Indian consumers are also very “spoiled” by Amazon’s strong service offensive and, in terms of speed and goodwill, expect a similar experience from other online businesses.

English is the primary language used in almost every eCommerce portal in India.

However, most of the eCommerce websites in India are also starting to offer their content in local and regional languages such as Hindi, Malayalam, Tamil, Telugu, Gujarati, etc. This is one of the best ways to reach customers who are not so proficient in English.

Having your own content in English as well as the main Indian languages is a good strategy for reaching more customers in every region of India.

The influence of Chinese trends on the Indian market

Of course, China also has a major impact on Indian consumers – both online and offline. Many tech giants from China have invested in Indian startups and unicorns like PayTM, Dream11, Zomato, Ola, and BigBasket.

However, some very popular trends in China, such as live streaming shopping, are not very popular in India. In smaller cities, people tend to buy products from TV shopping channels.

Last but not least – blogging in India

While very few private individuals in China have their own website and everyday life is documented via microblogging services such as Sina Weibo, WeChat or the many short video offers. It is still possible for any normal person to reserve domain names and buy web hosting (Webspace).

The people of India love to write in their own language and the consumption of content, especially in regional languages, is increasing.

WordPress is the most popular platform among bloggers in India.

Marcus co-wrote this post with Shakil Thasariya. Shakil, an SEO specialist and content strategist based in India, is looking to find low-competition keywords for his customers, optimize existing content, and expand the presence of his customers through SEO. You can find Shakil on LinkedIn here: https://www.linkedin.com/in/shakil-thasariya

Need some help to developing a winning SEO Strategy?

Get in touch with our team of SEO experts and discover they can support you in going global!