Within a few weeks, Google has tweaked its core algorithm and rolled out an update for the second time without officially anouncing it. According to our quick analysis, this update seems to be primarily concerned with trending keywords as well as temporary search intentions related to informational (shorthead) keywords. First-glance-winners are first and foremost media websites with one of the most important elements of the update being: topicality. That’s why I decided to use the working title “News-Wave Update”: Google surfes the trending tides! If this is supposed to be a permanent change, there will be a much higher volatility of search results in the future. 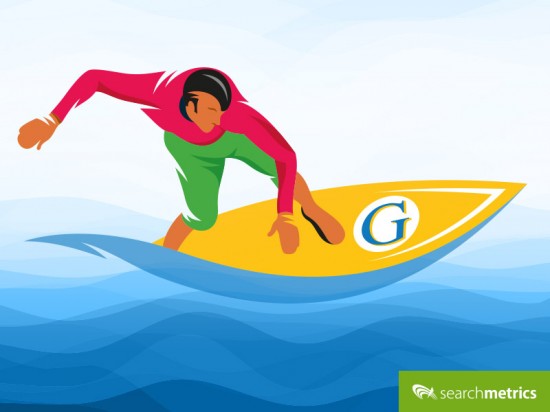 Volatility is the key focus here. This post is based on really fresh data, but while I was writing these lines, the rankings have already changed again. Google seems to update the SERPs constantly with new newsworthy content. It seems a bit like QDF (the concept of “hot” topics being included in the algorithm) has gone wild to me.

There is no official confirmation of the update by Google (yet), but this is not supposed to be a Panda-Update, which has been announced to be happening in “the next few weeks”.

Dr. Pete from Moz assumed a relation to HTTPS – and also to Wikipedia (currently moving to HTTPS). In fact, Wikipedia seems to be involved somehow, but differently than Dr. Pete supposed – at least that is what I believe and I’m going to show you what I mean in a minute.

What has happened until now?

On June 17th, many webmasters recognized ranking changes. First, let me collect the facts regarding the quesion, what the update was not:

Similiar to the most recent Google Phantom Update at the end of April / beginning of Mai 2015, Google did not make any clear statements regarding the update.

Winner of the Update

Clear winner of the update are domains related to news, magazines and newspapers, in the broadest sense: media. The current data is already available in our software – the Searchmetrics Suite. You can acces most parts of the data also without having a login:

I don’t want to include the whole list here because you can see it in the Suite, but already the top winners (sorted according to absolute gain of SEO Visibility) speak for themselves:

As you can see, the list mostly consists of well-known media websites publishing fresh and newsworthy content on a regular basis. In most of the cases, the respective URLs of these domains regarding their winner keywords have hit the top rankings out of nowhere.

Here are some examples of the winners: 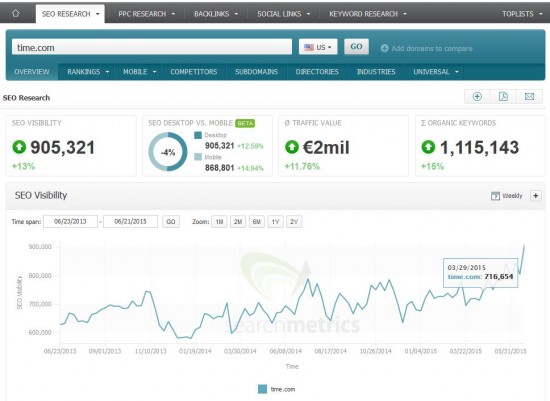 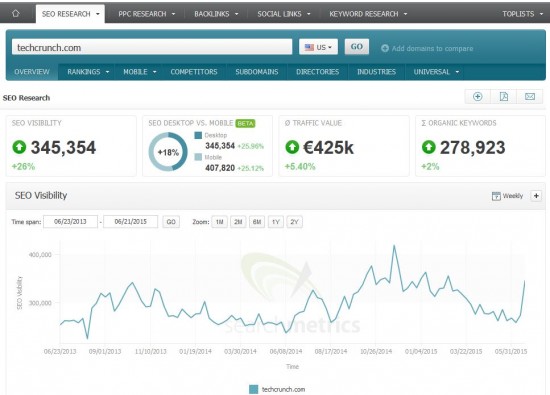 Those domains have largely benefitted for keywords like celebrity names. To cut it short: Many of the (organic) SERPs regarding the affected keywords look like an extended News box. And as I said at the beginning, the data has already changed while i was writing.

What is special about this update (and maybe related to to the strong topicality): There is actually no need to provide you with a loser list. Most of the domains that dropped have lost rankings because of the ranking boost of the winners.

“Losers” of the Update

Yet, I can’t deny some quality related connections being among this weeks losers. Among some spammers, there are a few bigger websites which lost on keywords that seem to look like Panda-related keywords, like dillards.com or gactv.com.

Interestingly, both of the domains I mentioned already dropped a week before: 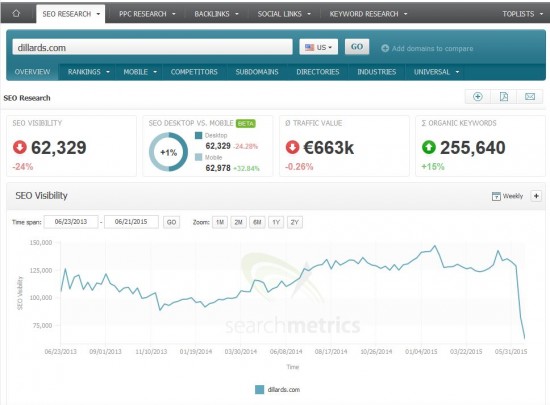 When you take a closer look, you can see a small step in the falling curve that markes last week’s data. Thus, the drop may have another reason than the current update. Same with the other example: 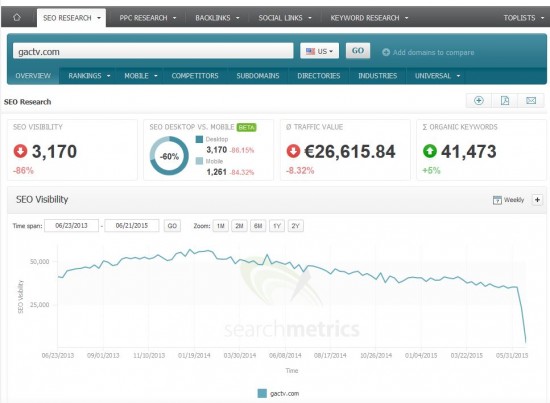 This is the “Google News-Wave Update”

Most of the changes are related to informational and newsworthy keywords. Please note that also keywords usually unrelated to news can become newsworthy when something happens that involves a topic which is related to this keyword. Typically, most of the keywords seem to derive from the shorthead, consisting of one or two words. And Google tries to serve the most current search intention for these kinds of searches.

Because news domains and magazines are (next to Wikipedia) one of the most important sources and elements of search results, they have been benifitting enourmously. BUT: This seems to be only a temporary success.

Since 2007, QDF, which means “Query Deserve Freshness”, has been being considered by Google. This is a concept incorporating issues like:

Now, this update seems to have taken QDF too far. It can’t be the intention of QDF to turn complete organic SERPs into something like a single news integration. Google is not supposed to be Twitter.

That’s why acuality is one the key factors for the Newswave Update. Google’s algorithm can now react immediately on changes in the search volume of specific keywords or trendings topics on Twitter, YouTube or Google News.

The Role of Wikipedia and/ or HTTPS

As I mentioned before, there were a lot of rumors this Google Update has something to do with the encryption via HTTPS – and therefore with Wikipedia. The site is changing to secure connection in these days. While we can’t see an effect of encryption in general, Wikipedia seems to be effected by this Google Update.

In comparison to the week before, the domain wikipedia.org lost nearly 3 percentage points in SEO Visibility. At a first glance, it doesn’t sound that much, but consider the enormous Visibility of this domain.

Let’s try to explain to drop in Wikipedia’s Visibility: The domain’s ranking position for tons of informational keywords is position 1 or 2. Now, when all the news sites got higher ranking due to the Google Update, it’s Wikipedia who missed the wave – and has a drop in Visibility right now.

More Examples for the Newswave

For a lot of general shorthead-keywords we saw the same development in this week’s rankings: Everywhere news sites entered the Top10-rankings. Take the keyword “Kanye West” for example. In the Top 10 you can find 4 new entries, 3 of them didn’t rank for this keyword the week before. 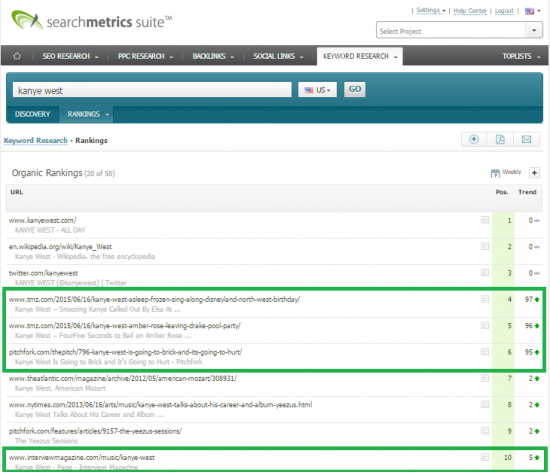 You want another example? Take „US Open“. Google considers that you obviously meant the golf tournament (which is happening in these days and as yet on position 4 in Google Trends) – and not the tennis challenge. As you can see, 4 out of 10 ranking positions are new entries – these landing pages didn’t rank for US Open the week before.

Somehow, in these new volatile search results you can find URLs from news websites, which offer a) old or b) thin content. That’s why our analysis of the Newswave Update is just a first research. I could imagine that Google is still testing & improving the algorithm change in the next days for providing the very best search results.

Could this Update effect my online business?

Google is supposed to consider majorities when semantically finding out what’s the search intent of the users. Indeed, this could be a problem for web-based business models. Consider the US Open, for example: If I provide tennis lessons, or offer pre-booking hospatility packages for the tennis tournament, I will loose rankings and traffic when the golf challenge takes place and Google provides tons of information and URLs just for the golf variation.

Update: The domain gactv.com has been redirected to greatamericancountry.com, so there seems to be another reason for the drop.