And finally, the big day has arrived. After a long battle between the marketing teams from 32 franchises, we will get a champion. To make it this far these savvy internet marketing mavens had to be strong in search presence (great rankings, and lots of ’em). They needed to align their social media marketing with elements such as videos and images. They had to be newsworthy. And now and again? They had to pay the price (PPC) to get noticed.

Nothing has come easy. To get a sense of the road to this point, check out our past posts;

Along the way we’ve also learned what makes a great search presence, how to analyze competitors and even seen how plans can be made for a future internet marketing strategy. This time out, we’re going to dig even deeper… to find a winner.

The stage is set and we have the two biggest players when it comes to search visibility on the web today. The players are set to take the field, so let’s jump right into the action.

As the game got underway things were staying close in the initial view of SEO Visibility. What kind of presence do the teams have? This metric is all about the SERP. This is calculated on;

I’ll be writing more about this next week, so be sure to tune in for that. So, how’d our teams stack up?

We looked at a 12 month period and interestingly both teams seem to be losing steam over the last few months. They were virtually mirrors of each other until June 2012 when the Steelers took a slight advantage, only to fall off more recently.

Next we’ll have to look a little deeper at what kind of terms they’re actually nailing. How strong are the brand terms? Because building brand is the name of the game. And what kind of long tail terms are in play, because this can play to transactional values (shirts, caps etc) and universal elements (query spaces that have videos, news or other display elements). 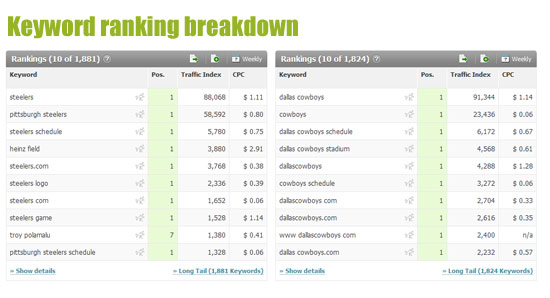 To keep things fair, we used a 30 day period, instead of the 7 day view. Dallas; Seemingly the stronger of the two, brand related terms (no modifiers) ruled the day, obviously. From there it was terms with modifiers including;

Given the search volume generated on the brand, they are still looking strong.

Pittsburgh; The Steel Town monsters came in a bit weak, so there is some pressure on to show some great diversity in their keyword rankings. As with the Cowboys, they are strong at the top with a variety of brand related terms. They also had a lot, if not all, of the same modifiers in play. Just not the same volume. Which could be a good thing, it may mean diversity.

Ultimately this shaped up to be a battle between brand recognition, page mapping, transactional potential and sheer search volume. In looking at the search volume for each, over the top 100 keywords, it was actually the Steelers (6,100,747) dominating the Cowboys (2,797,487). Combined with the greater diversity of page mapping, there is no doubt. Winner; Pittsburgh Steelers

While it’s long been the case that paid search listings have less trust and generally less profit, we must always consider brand lift. That multiple areas of dominance in a SERP, helps further solidify the brand. It might also prove helpful to those that are having problems ranking in various transactional spaces. We haven’t used it as a core metric for this bit of fun, it does help make up visibility. 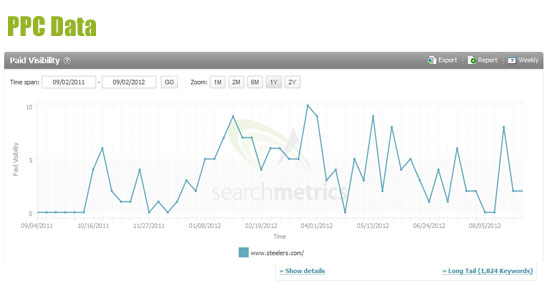 From what we could see it was Pittsburgh that has been using it to any degree of seriousness over the last 12 months. And given that they were weak in product related transactional terms, some of their choices are telling;

And so again it is the boys from steel town that seem to be ahead. It’s not looking good for America’s Team. They might want to supplement some of their transactional organic shortcomings to remain a contender. Winner; Pittsburgh Steelers

Well, the first half is gone and if Dallas wants to be crowned kings, they’re going to have to step it up. It’s time to see how these awesome brands stack up in the world of social. As search and social continue to meld, it will become more and more important to ensure programs are in place to maximize over-all visibility. 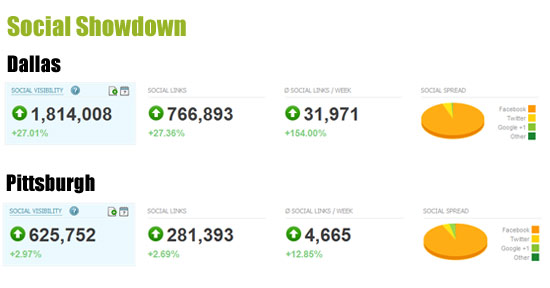 Wow, this is getting ugly. The Steelers are simply dominating on social media. This is somewhat surprising given that they don’t have the larger following. It must be an active bunch of fans and great engagement from the marketing team.

Here’s how their social activity spread broke down over the last 7 days;

The Steelers were really taking it to the Cowboys on Twitter and Facebook. Certainly Dallas had a bit more visibility over on G+ and LinkedIn, but those really aren’t the key battlegrounds in the current social landscape. Given that they have a slightly larger following, Dallas could likely make up some ground with a little more focus on Twitter, and potentially G+ (which greatly enhances search visibility on Google). Winner; Pittsburgh Steelers

As we head into the fourth quarter it seems that only a miracle will produce a big comeback for America’s Team. Universal or vertical elements in the search results (for this series) is based on where they show up for videos, news, image and map universal elements.

Having prominence here not only builds the brand further, but also can increase click-through rates and occasionally act as a shortcut to higher rankings. So, how will out combatants fair? Let’s get back to the game and drive to the end-zone. 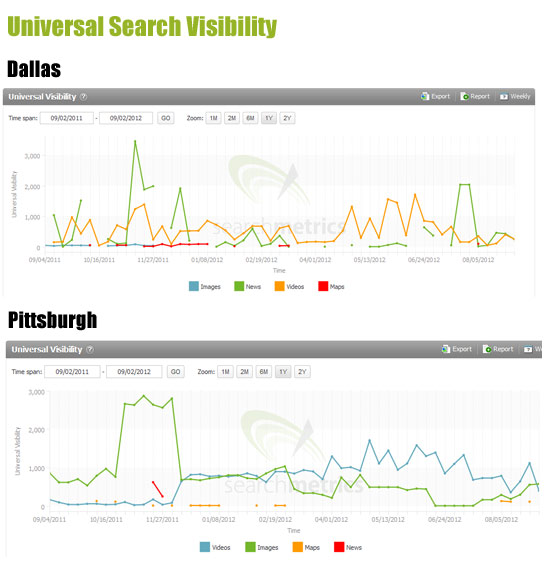 While maps (brand terms) and images are great, what we really want to see here are the news and video universals. Video is a great visual tool (better than images) and news universals mean you’re out there and active in the real-time landscape. Hopefully for all the right reasons.

Pittsburgh really came on strong in images and the all important video areas while Dallas dominated the news universals, while recently sliding on the video end of things. It we take the entire 12 month period and the valuations above (new and video being dominant), it seems that Dallas makes a bit of a last minute push. Winner; Dallas Cowboys

And the winner is….

It’s been a long road this season (seriously, damned posts took forever lol) and there can only be on left standing at the end of the day.

When it comes to dominating the search results, the marketing team and fans of the Pittsburgh Steelers should be pumped!

This little journey was just something I thought would be fun to do, I also hope you got something from it. Snuggled away within the words and data are some important lessons.

And more. Each of the areas we touched on, was just that; scratching the surface. We could have easily dug further and further into the various visibility elements to find even more nuggets of data gold. Crafting a cohesive strategy often starts with the big picture, then we get more granular.

I simply wanted to make you think. We all use data in different ways. It is the thought process that was important to me. And yes, at the end of the day, it just seemed like a fun thing to do. If you’re looking for a great example of mullti-channel search visibility, I suggest digging into the Pittsburgh Steelers website profiles. They rock.

Thanks for playing along and be sure to subscribe to our feed for more!