With its Site Diversity Update, Google want to show a wider range of websites in its search results. From now on, domains should no longer be able to occupy more than two ranking positions on a single SERP. In this post, we take a look at how much diversity has really been created and we also analyze the connection between search intent and site diversity, as well as examining the added relevance this update gives to SERP Features like images, videos and Featured Snippets.

Have you been affected by recent Google Updates? Conduct your own ranking analysis in our Research Cloud:

As is now commonplace, Google, via Danny Sullivan, used its Search Liaison twitter account to announce that a change had been made to its search results.

Have you ever done a search and gotten many listings all from the same site in the top results? We've heard your feedback about this and wanting more variety. A new change now launching in Google Search is designed to provide more site diversity in our results….

The tweet on 6th June 2019 can be viewed as part of Google’s attempts to maintain a certain level of transparency in its communication with the SEO industry, in particular regarding the updates to its search algorithm. Sullivan also made it clear that the Diversity Update was separate from the June 2019 Core Algorithm Update, which was pre-announced on the 2nd of June and rolled out from the 3rd.

How much impact has the Diversity Update had?

The concept of the Diversity Update is clear – to limit the number of domains appearing with multiple URLs in the SERPs. This raises the question of how widespread this before the update. How common was it to find the search results flooded with organic rankings from a single domain?

To provide an answer, we have compared the search results for a set of thousands of keywords from March 2019, a few months before the update, with June 2019, just after the Diversity Update was announced by Google. For each keyword, we can measure the diversity of the search results according to the maximum number of URLs in the top 10 that belong to a single domain.

The chart shows how domain diversity has changed.

The main developments are:

The drop in keywords returning multiple URLs for one domain has meant that now just over half (52.3%, up from 47.9%) of searches return ten different domains in the top 10 rankings.

The keyword set used for this analysis focuses on informational and transactional search terms. This means that users are either searching for information – answers to questions – or they want to purchase a product or service. This excludes navigational searches, where users already know which website they want to visit, and are using Google as a more comfortable way of getting there than typing the URL into the browser address bar. Here, I’ll take a closer look at the how the Diversity Update has affected the search results for keywords of different user intents.

Anybody entering a clearly navigational keyword like “facebook login” into a search engine probably only has one page they want to visit, and yet Google still returns millions of results, sorted according to relevance. Following the Diversity Update, we see that Google makes an exception by obviously navigational keywords, and continues to include multiple results from one domain near the top of the search results, as this example “eye primer target” shows. 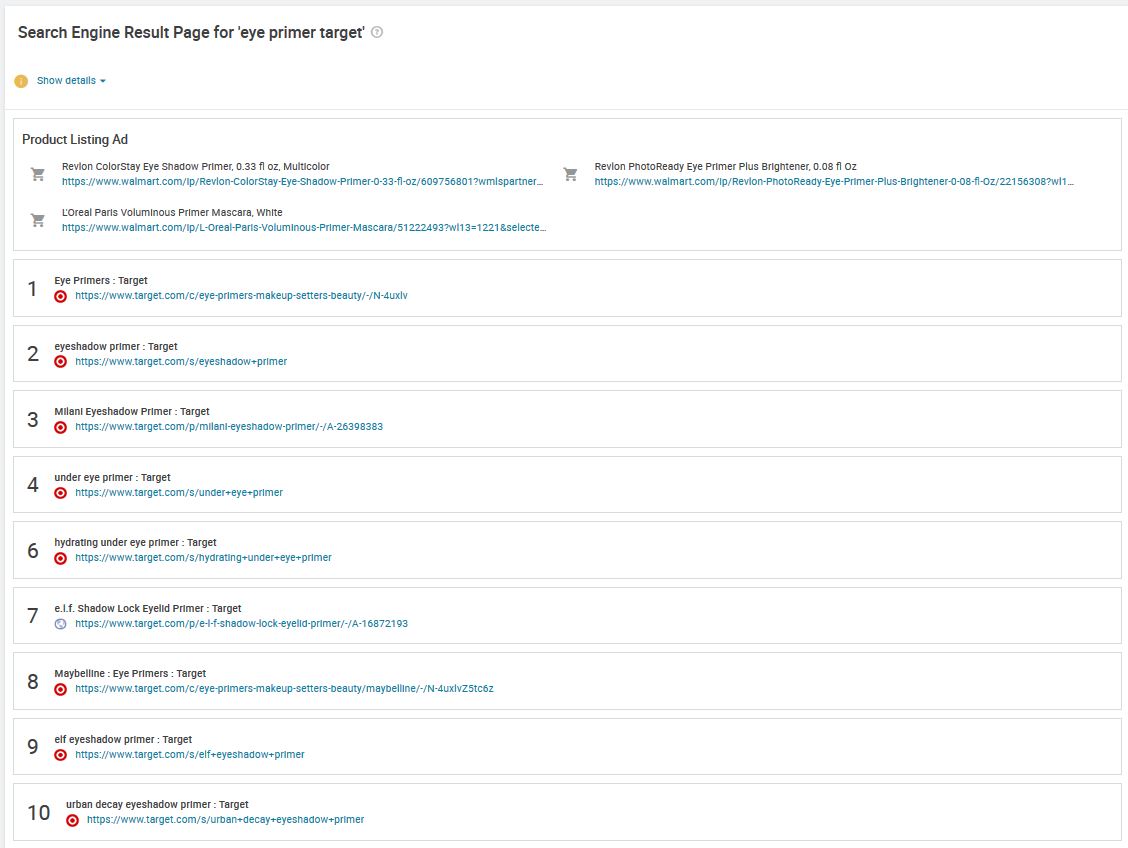 The top 10 organic ranking positions are all occupied by target.com, with a rival, walmart.com, only visible on the SERP by virtue of having purchased three spots in the Google Shopping (Product Listing Ad) unit at the top of the page. Including the shop name (Target) in a search sends a Google a strong signal that this is a navigational search. Google continuing to list 10 results from the same domain shows us that they aren’t sacrificing relevance at the altar of diversity.

Which user intents have been most affected?

Now let’s look at transactional and informational searches, which tend to be far more competitive, with numerous domains competing for positions on the first search results page. First, we can examine the search intent of two subsets of keywords within our analysis set:

Search intent spread is calculated from the search intent of each individual keyword. Most keywords will have a mixed intent, as the same term can be used by someone looking for information and by someone looking to make a purchase. As mentioned above, the keyword set used here focuses on informational and transactional searches, which explains why navigational intent is so low.

The main difference between the two subsets is clear – there is a clear leaning towards transactional searches amongst keywords that have been impacted by the Diversity Update – meaning a domain has lost (at least) one of its three top 10 rankings. As a consequence, there are more informational searches in the set of keywords that were not impacted. The comparison is emphasized in the chart below.

The fact that impacted keywords are more likely to have a transactional search intent means that Google is offering shoppers more choices of domain – and therefore shop – on the first search results page. If we look at an example, “nut crackers”, we see that in March, amazon.com had the top three organic results. 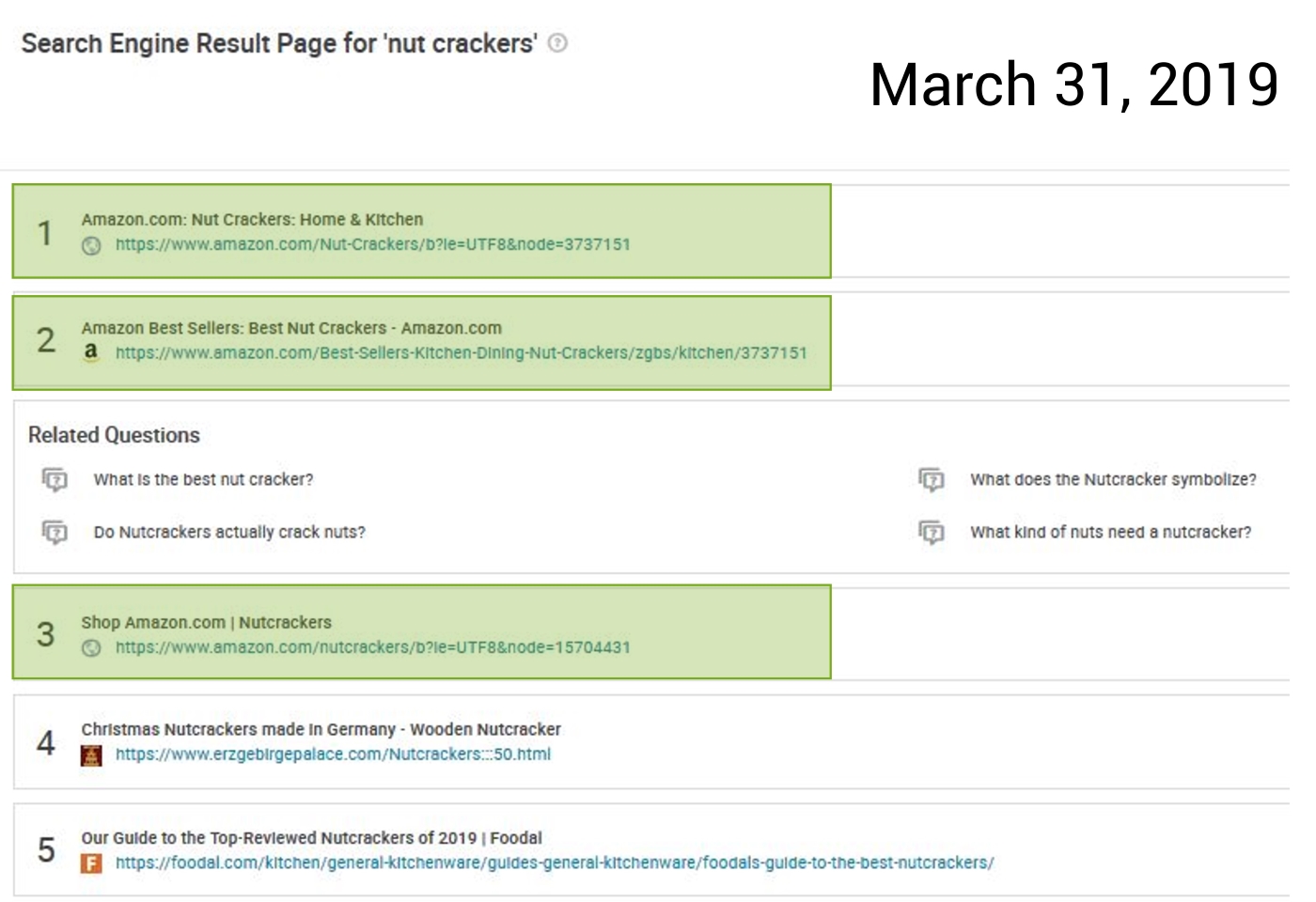 After the Diversity Update, amazon.com only had the top two organic results. However, Google is now displaying an image box above the third-placed organic result – and Amazon owns three of these images. This shows that, even though amazon.com is limited to two normal organic rankings, it is still able to occupy a considerable amount of real estate near the top of the SERP. However, the update does mean that walmart.com has managed to enter the top 5, giving prospective shoppers another viable, well-known option besides Amazon. 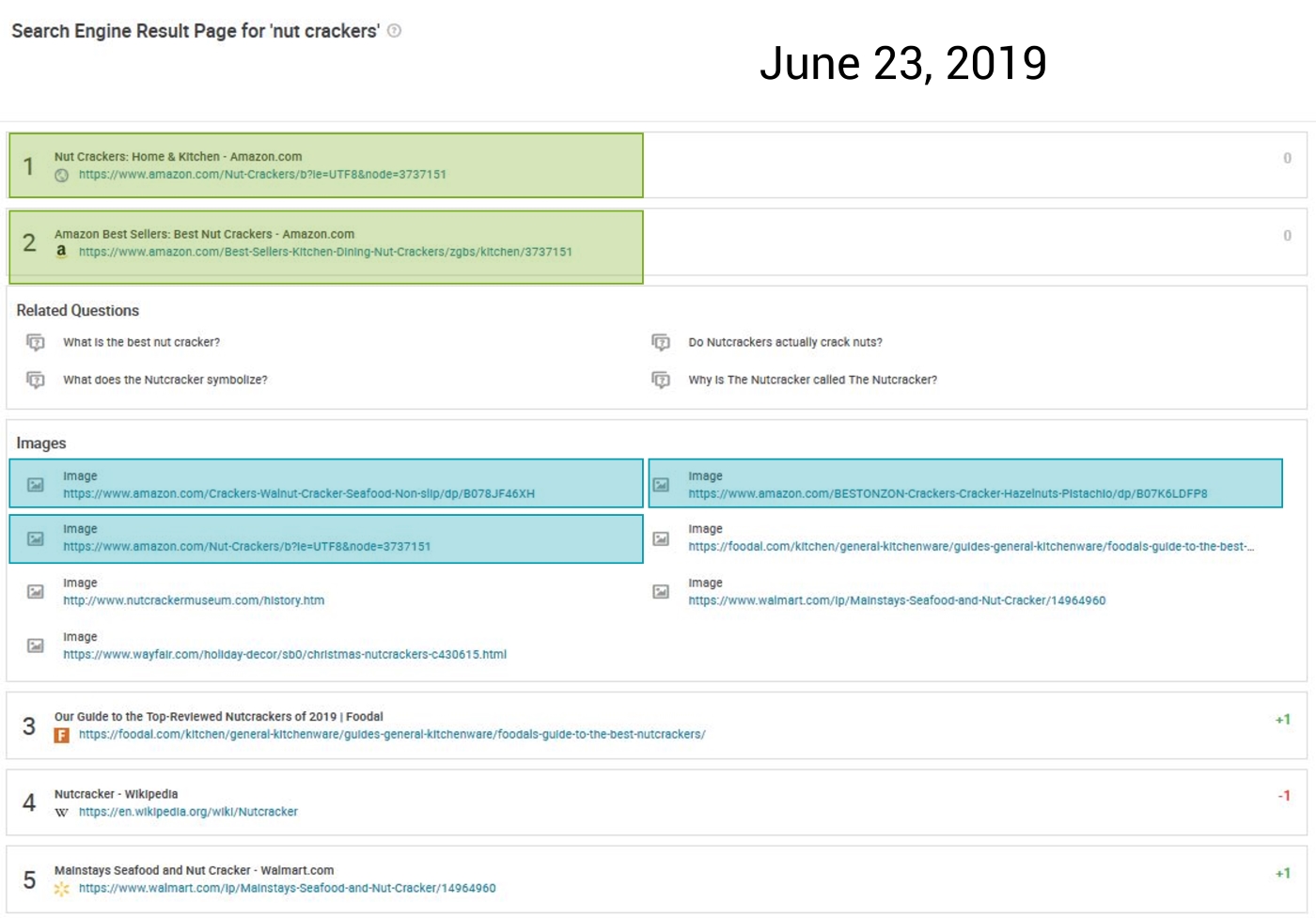 To show an example of a strongly informational search that still has 3 URLs from one domain, we can look at recipes. allrecipes.com, even after the Diversity Update, still owns the top 3 organic ranking positions with three different URLs for the keyword “anise seed recipes”. 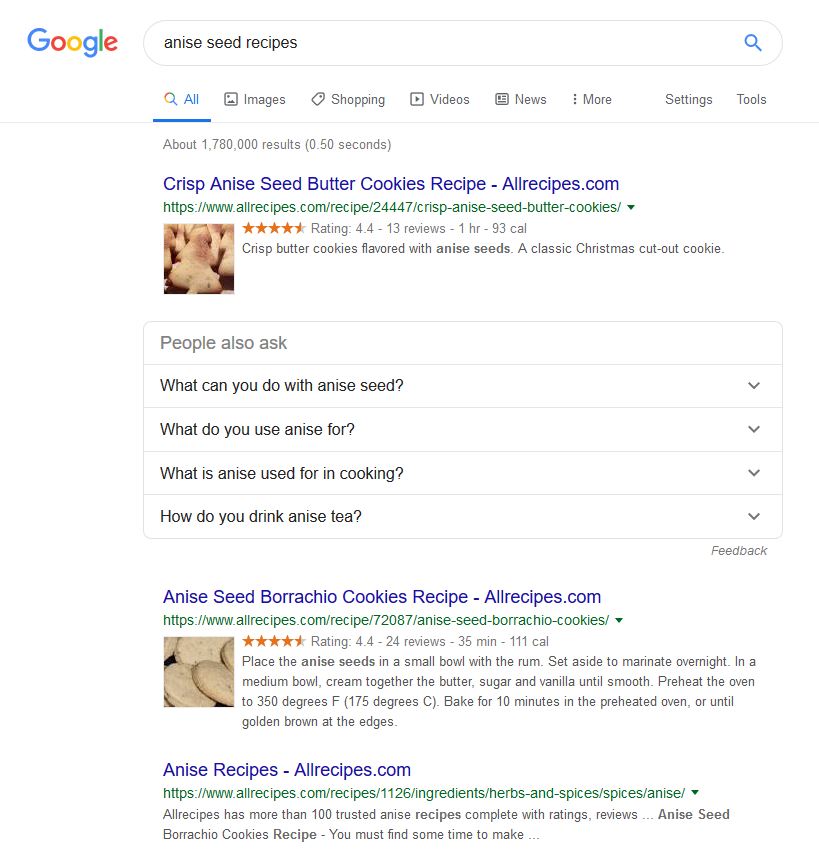 This is evidence that, at least for websites in certain niches, Google is still favoring relevance over forced domain diversity. If you have content that meets the user intent – if your website is built on strong technical optimization and (particularly in the case of recipes) you utilize structured data mark-up to show the Googlebot exactly what you’re offering, then there are still opportunities for dominating the top of the SERPs with your content.

So far, we have been looking at the diversity of domains in the top 10 organic rankings, as Google has stated that only these are affected.

It's about the main listings, not various other displays on the search results.

This means that SERP Features, such as maps, images (as we saw earlier with Amazon) and, importantly, video carousels, aren’t affected. The vast majority of results in video carousels belong to YouTube.com, meaning that YouTube is uniquely placed to maintain its presence in the Google SERPs. Where other domains have often lost their third (organic) ranking, YouTube’s video rankings are not affected.

In this way, the Site Diversity Update could be seen as benefitting domains that specialize in video content – an area where Google-owned YouTube happens to have a near-monopoly. It isn’t quite a monopoly though. Other websites with audio-visual content can also rank with multiple videos in a carousel. In this example, we have msnbc.com doing just this, with YouTube nowhere to be seen. 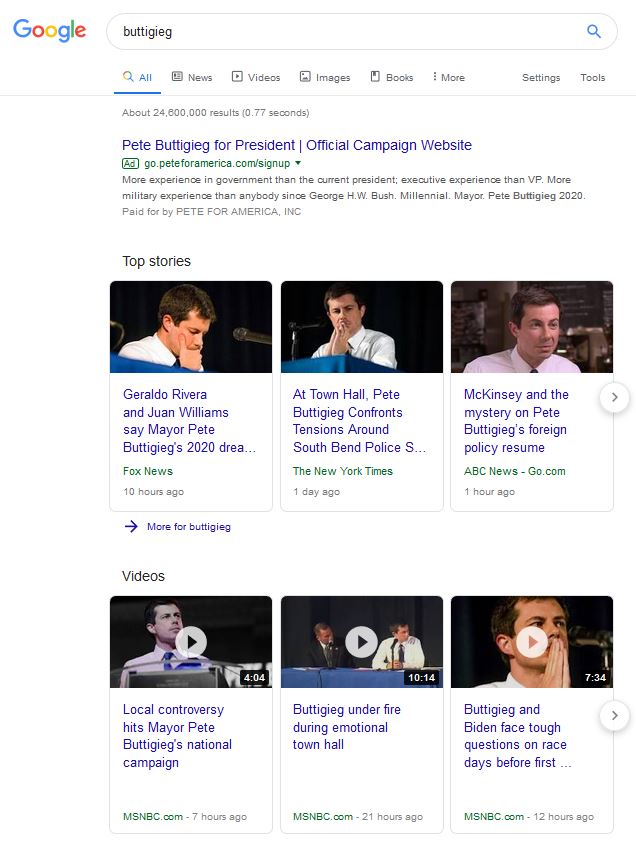 Typically, a navigational search will include the name of the website (e.g. “target” in the example above), but this isn’t always the case. In a few areas, a website has built up such a market dominance, akin to YouTube for videos, that it doesn’t need mentioning by name for Google to point users (almost) exclusively to this site. One example is for GIFs, where giphy.com can still rank with more than three different organic URLs. 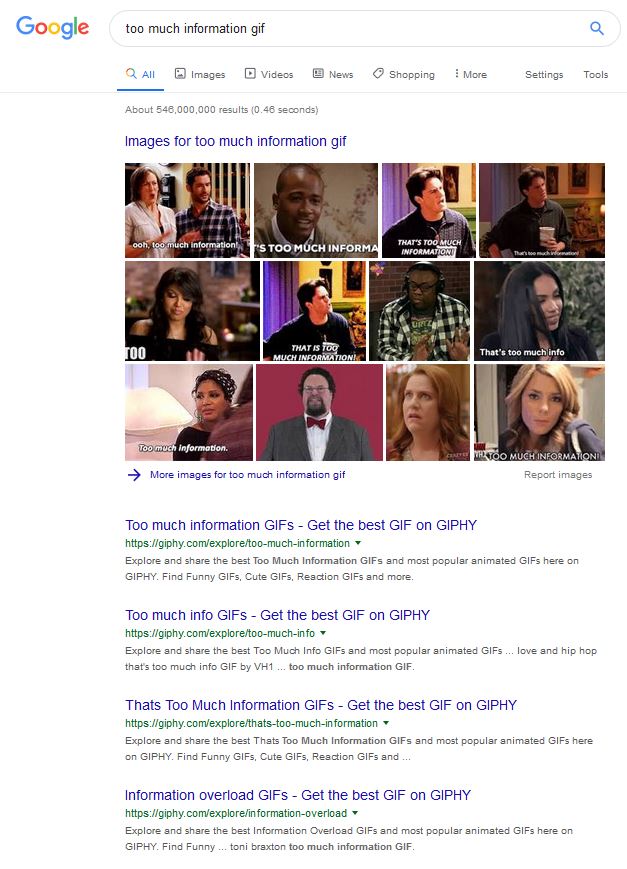 Here, giphy is being rewarded for its success, which in Google’s terms, is a result of its ability to be “especially relevant”.

This site diversity change means that you usually won't see more than two listings from the same site in our top results. However, we may still show more than two in cases where our systems determine it’s especially relevant to do so for a particular search….

Conclusion: Real diversity or divide and rule from Google?

There is little point trying to second-guess Google’s motivations for making this apparent push towards more diverse search results. What’s more important is understanding its impact and working out how best to respond. What’s clear at the moment, is:

Another consequence is a possible increased emphasis – for the Amazons of this world – on paid listings. If they can now only have two unpaid results, then one way to ensure more top-of-SERP presence will be investment in AdWords or Product Listing Ads, which Google obviously won’t mind at all.

The Site Diversity Update is an important step in the right direction. If you’ve gained additional rankings with this update, make sure to capture some clicks by optimizing your snippets! And I wish I could say I was surprised that Google made an exception for Youtube.” Malte Landwehr, VP Product at Searchmetrics

Finally, our analysis showed that transactional searches are most affected by the Diversity Update, which slightly shifts the balance of power away from shops like Amazon, which have often lost one of their three rankings, and towards Google Shopping, which remains highly visible above the organic results. As ever, Google will no doubt monitor how users react, as it continues its balancing act between providing the most relevant results possible and ensuring that it maximizes revenue from its own services.

If you’re interested in exploring the potential traffic opportunities offered by SERP Features, then find out more here:

SERP Features in your Market!