What is behind Google Lighthouse Data, how do you conduct Lighthouse Audits and which conclusions can be drawn from Google’s further priorization of this open-source project? Searchmetrics CTO & founder Marcus Tober revealed certain details, examples and benchmarks in his talk “When they go big, we go better: A New Take on Understanding Google Rankings” at 3XE in Dublin mid-October. If you want to find out more about this topic, we’re happy to share the full deck. 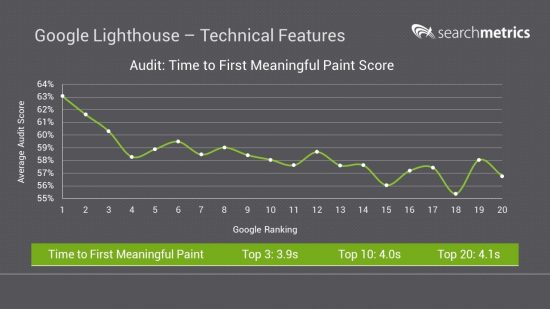 “A New Take on Understanding Google Rankings” by Marcus Tober

The immediate aftermath of the Google Speed Update – Expert Voices

Since July 9th, page speed has been a definitive ranking factor. While websites with decent mobile performance had nothing to fear from the Google Speed Update, this was the last call for other sites that lacked dedicated optimization for mobile performance. In other words: “Mobile First” is now more than ever the reality we live (and work) in. In this installment of Pulse, we have asked online-marketing-experts about their take on the consequences of the Google Speed Update and their best practices for mobile optimization.

Prior to the speed update, in order not to be affected I recommended implementing a few measures:

I’m also strongly recommending my clients to switch to http2 now that all of them have https implemented – not only because of this particular update.

In the aftermath, we saw several websites being hit. My colleague Natzir  shared a case:

All my clients were aware that speed is a crucial aspect of their mobile site, so this update did not change anything in particular nor should it have raised new questions, apart from “how will Google measure speed?” The answer to this question is tricky for sure, but it probably has to do with the Google RAIL model and all the metrics defined in it. Subsequently, some webmasters and online marketers I work with gave more priority to speed improvement tasks that were on their roadmap anyways, which is always good!

“How will Google measure speed?” – The answer to this question is tricky for sure, but it probably has to do with the Google RAIL model and all the metrics defined in it.”

Regarding the final impact of the update, it’s soon to say. My expectation about this update was to only impact really slow sites, but I haven’t seen lots of cases affected by now, so I would say it is on par with expectations or with an even lesser impact.

General measures people should take to improve site speed are:

With regards to the actual impact of the Google Speed Update, I would say that it is too early to draw a final conclusion.

“If the update in general has a larger or lesser impact in Google rankings as expected is not clear – yet.”

If the update in general has a larger or lesser impact in Google rankings as expected, it is not clear – yet.

Some of the measures we often help with are:

The SEO industry was aware of the importance of speed and performance long before the speed update started rolling out, especially after mobile-first indexing. For our clients, we were measuring and tracking performance of mobile versions of the websites and the industry averages on page loading times.

“If you do not count user experience as your main KPI, then it’s not only a speed update that can cause problems.”

Therefore, we did not experience any major issue with our clients’ speed that could lead to loss after the speed update was released. The Consultants at the Searchmetrics Digital Strategies Group are continuously supporting our clients by improving their speed and performance way beyond their industry standards.

A lot of our clients were asking what effect the speed update may have for their own website, but based on what we’ve seen so far it was only affecting poorly performing websites whose user interface and overall performance were not up to date. The update affected old CMS websites, or websites with old mobile versions, so it was clear that they need to dedicate time for improving their user satisfaction, and speed was just one of their issues – not the only one. Clients who were interested to know how to prepare for the upcoming update are usually the ones who had already applied many changes and improved their performance, so there were no losses with their websites’ visibility or traffic. The update hit really old non-responsive designed websites, and websites who did not count on mobile-first indexing at all.

As for the general impact, there were a lot of controversies online, even from professionals speaking in front of the Google quality team. The main questions in the discussion were: What will be the impact of Google speed update and will it affect every website, or just really slow ones? In the end, affected websites were the ones we expected to drop, but websites with small issues and average loading times were not affected by update, so I would say it was just as we expected it to be. If you do not count user experience as your main KPI, then it’s not only the speed update can cause problems; it can be even a small tweak from Google’s SERP improvements and a tiny algorithm update. 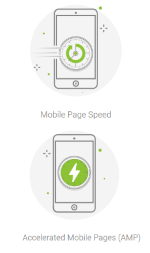 P.S.: If you want to deep-dive into the world of mobile optimization, the Searchmetrics Speed Study is just for you. Get global insights and hands-on optimization advice for mobile page speeds and Accelerated Mobile Pages (AMP) across five industries: eCommerce, finance, health, media and travel.