In case anyone missed the memo, Google has proclaimed that mobile is where it’s at these days. As it begins implementing its Mobile-First strategy, one of the increasingly key Google initiatives marketers will need to understand is its Accelerated Mobile Pages (AMP) option. At Searchmetrics, we’re introducing a new blog feature called Pulse, which will offer details and thoughts on industry happenings in the world of search and content marketing. First up, we examine Google’s moves out of its recent AMP conference in Amsterdam as it moves to revolutionize and dominate content creation.

A Recap On AMP

AMP is a relatively new protocol for mobile navigation, aimed at speeding page loading times and reducing bounce rates. On the first page of the SERP, 21% of search results now are AMP, according to Searchmetrics data. For publishers,  78% of their results are AMP-enabled. Research has found that some 53% of mobile site visitors permanently abandon a site if it takes more than 3 seconds to load. Meanwhile, sites that load in 1-2 seconds see improved search rankings and more ad revenue. In a keynote talk, Dave Besbris, VP of engineering at Google, quoted a Forrester study that found that AMP sites for e-commerce resulted in 20% more sales conversions.

AMP includes three components: limited HTML5, AMP-encased JavaScript and an AMP cache on Google’s servers.  The cache validates your AMP pages and will only display those pages to users. This makes mobile navigation nearly instantaneous. Your AMP pages are stored by Google, and your Google search result, when clicked, doesn’t return to your server for your AMP content; it uses one of Google’s many global servers to retrieve your content. To give the impression of instant loading, Google preloads initial views of AMP sites that top a SERP, before the user clicks on a search result.

The biggest new Google initiative is AMP Stories, a mobile-first project that also works on desktop. It features tappable interactions and vibrant animations, “snackable, bite-sized pieces of visual content for your mobile device.” You can see AMP Stories, for example, from People Magazine on Prince Harry and Meghan Markle. AMP Stories content will soon start appearing in Google Search.

It’s becoming increasingly clear Stories is part of Google’s move to revolutionize and dominate content creation. AMP Stories and a new WordPress AMP plug-in will expand AMP’s offerings to publishers. WordPress is the CMS of some 30% of websites worldwide, and it includes side tools for e-commerce.

E-mail content can also be updated so that when the recipient opens it, the content will be current at the time of opening. Google will launch AMP for gmail later this year, again with e-commerce implications.

You can embed AMP elements in regular website pages to get improvements on speed. However, these will remain non-AMP pages and will not win in mobile search results as AMP content.

To get mobile SEO benefits, you have to have whole AMP-validated pages that are stored in Google’s AMP library or cache. This is a change in tune from Google’s previous statements that AMP validation was not a ranking factor. At first, AMP results appeared in a carousel in SERPs; now they appear with HTML sites in all mobile search results, designated with an AMP lightning bolt logo.

On January 17,  Google announced: “Today we’re announcing that starting in July 2018, page speed will be a ranking factor for mobile searches.”

This “speed update” will potentially make AMP validation an SEO ranking factor.With 2018’s mobile-first index, AMP will become even more important in mobile rankings, although Google has not stated exactly how, beyond page loading speed and good UX.

Nor is it clear how the mobile-first index will work with AMP and desktop rankings. In an interview with Search Engine Land on January 17, a Google spokesperson confirmed “our index will be built from mobile documents,” but Google also maintained that the speed update was about mobile rankings only.

While AMP started with media and publishing, e-commerce is Google’s next AMP frontier.  A 1-second delay in load time can lead to a 7% drop in conversions, according to Google. Some online retailers say every extra second adding to load times creates a further 12% drop. If you create AMP-valid webpages parallel to your regular content, Google promises massive improvements in speed, stickiness, SEO, CTRs and conversions. 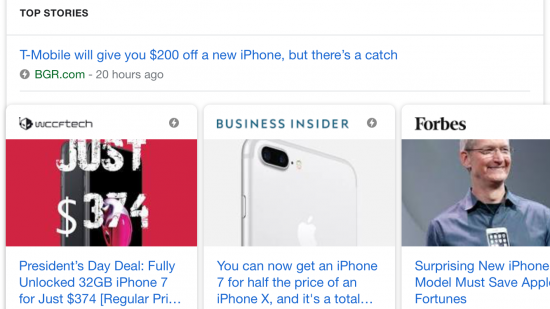 Online retailer eBay was the first major non-news site to implement AMP.  After serious SEO problems with unstructured data between 2014 and 2016, it uses AMP to provide speed in e-commerce navigation and to boost search visibility for its listings.

In spring 2016, CEO Devin Wenig  in a diginomica article explained how the company used AMP to prioritize for the mobile web and structured data.

By March 2017, eBay had almost 16 million AMP product pages. Yet, there were teething problems. eBay found that exact metrics on conversions were unclear because the AMP pages are stored on Google’s servers, and Google Analytics double-counted click-throughs.

AMP Not, Want Not?

Because AMP pages are currently stored on Google’s servers, this could pose the biggest challenge for adopters. Simply put, AMP rankings and analytics are something of a black box. Google has announced that AMP pages may be stored on the origin server. However, if your server does not meet AMP’s primary needs (fast content delivery network, HTTP2, optimized images, optimized HTML) the way Google’s servers do, then you won’t get AMP’s speed and you will lose ranking in mobile search results.

Some 70% of AMP publishers also have reported implementation errors. If you wish to create AMP pages, verify first whether your site functionalities can work through AMP. Third party integrations on your site can also be problematic.

Implementation errors mean that the huge SEO returns Google is promising can be stalled. You can end up with a desktop version of your pages, an independent mobile web version, and an AMP version – all of which need tweaks and updates. This can create confusion in canonicalization and content parity issues across different page versions.

A tool called the AMP Validator (https://validator.ampproject.org/) lets you enter your pages’ code to check if you have made errors in AMP protocols.

To troubleshoot further, an SEO crawler simulator that supports AMP can crawl your AMP pages before launching them. After launch, check your AMP site again with Google Search Console AMP report and the AMP Test Tool.

The conference confirmed our suspicion that AMP is not just for news sites or even e-commerce. It is the start of what Google hopes will be a revolution in visual, interactive and monetized content. If you don’t act in these areas, your competitors will. However, be aware that Google dominates this initiative, while it leaves the work to you.