Here we go again! For those who’ve missed it, the last few weeks have been a bit rocky for online marketers’ visibility stats – peaking toward the end of last week (CW 6/2017). There’s been lots of speculation that the culprit is the rollout of Google’s “mobile-first” index. One theory making the rounds is that pages that use interstitials when loaded on mobile devices have been downgraded. However, when we look at the pages that have been most affected we see a clear pattern: make way for the return of the Phantom. The Google Phantom 5 update, to be exact. 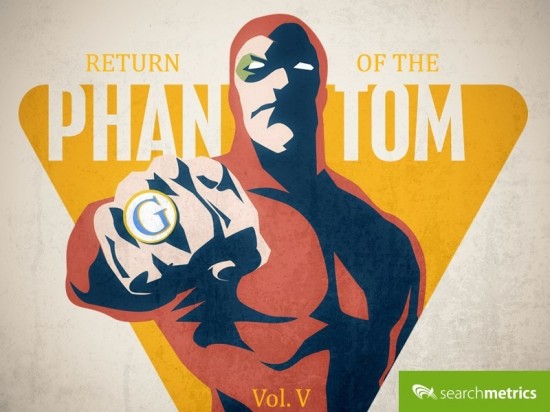 This makes it the fifth time Google’s Phantom has dropped in on unsuspecting web citizens. What makes us suspect Phantom? Easy: Many of the affected pages are domains that we already know from earlier analyses of Phantom Updates. Typical characteristics for these updates are fluctuations over a longer period, no bundled losers along industry lines and yo-yoing Visibility for many pages – from iteration to iteration. This rollercoaster ride leads quite justifiably to many of you asking the question: What is Google really trying to do?

We’ve covered the Phantom Update (which has never officially been confirmed by Google) and its (to date four) iterations extensively in earlier posts on this topic. Here is a little overview for anyone looking to catch up:

Spot anything? These updates, which were originally also described as “Quality Updates,” seem to have become a regular half-yearly event. It’s interesting that the same familiar faces are seen every six months amongst the winners and losers – but none of them are on a continuing upward or downward trajectory; they’re bouncing up and down.

So are these cases of Google correcting earlier mistakes? This yo-yo effect does suggest that the search engine isn’t entirely satisfied with the actual impacts of the updates. The brunt of these corrections is borne by the domains that – at least for a certain period of time – suffer what are sometimes catastrophic drops in Visibility.

On the other hand, several webmasters are reporting that the fluctuations are affected pages and/or rankings related to keywords that are irrelevant for their traffic. This means that, even if there is a major change in the domain’s overall SEO Visibility, the lion’s share of their relevant traffic is not – or only negligibly – affected by Phantom.

This depends, of course, on where a page is getting its traffic from. Phantom certainly concentrates primarily on high-volume short head and brand keywords.

What is Phantom looking for?

So far – and with this latest update – it has not been possible to precisely pinpoint Phantom’s focus. Nevertheless, we can recognize several typical characteristics of this filter that keep on coming back. These can be considered “soft factors” for the evaluation of a page, which is why they can prove so hard to define (even for Google!)

Here is a short summary of the most important recurring observations:

Let’s have a look at a few pages that have been impacted significantly by the latest iteration of the Phantom. In particular, we’ll look at the “familiar faces” from earlier Phantom Updates.

For the losers, we see in several cases that the Visibility rose at some point in the past weeks, and has now returned to its previous level. This would suggest that Google has been carrying out tests.

In this last example in particular, Phantom has caused a real rollercoaster ride in the domain’s SEO Visibility over the last couple of years. Loser > Winner > Loser > and now a Winner again.

Another thing is clear from the curves: In contrast to previous Phantom updates, which saw the filter rolled out over several weeks, the jumps caused by Phantom V are particularly noticeable in direct comparison with the previous week. We will have to see if there are any further developments in the next few weeks.

Impact on some domains not previously affected by Phantom

Phantom V is not just an exclusive old-boys’ club. Some domains have seen large spikes/drops in their SEO Visibility, even though they were not affected by earlier Phantom updates. For example, there are some eCommerce pages displaying drops/spikes in Visibility. Though this could be largely a side-effect of the impact on brand and short head keywords, and not because of Phantom specifically targeting eCommerce domains. On the whole, the list of this week’s winners reads like a selection of domains familiar from past updates. 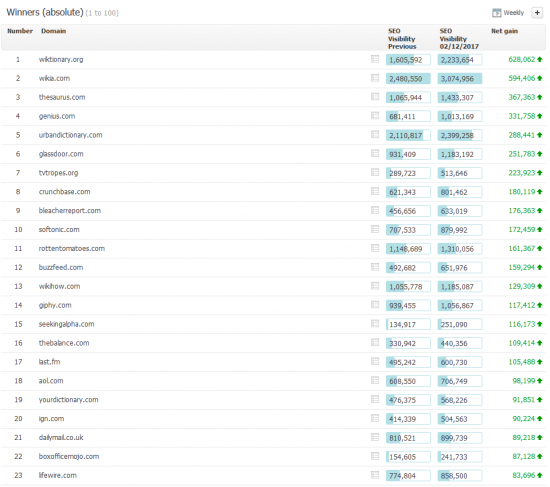 Amongst the losers, Reddit.com saw a major drop in Visibility of around 25%. Reddit.com has also seen an unusual trend in its Mobile SEO Visibility (green), evident in the weeks before this latest drop. However, it is questionable – and too early – to hypothesize any connection to “Mobile-First.”. There is certainly no observable broader trend along these lines. In Reddit’s case, this could be related to (technical) problems with the mobile version of the page.

Google seems to have genuine difficulty evaluating the relevance of large pages, when looking at brand and short head keywords. It looks like the parameters for measuring quality are adjusted at regular intervals, meaning that the SEO Visibility of the domains affected is subject to major fluctuations. These domains are likely less than amused if this is impacting keywords that are relevant to them and their traffic. On the other hand, it hardly makes sense for many affected companies to rank for other brand names besides their own. This might lead to a higher overall SEO Visibility, but it is unlikely to create any relevant traffic. It may be this conundrum that Google is attempting to solve.

For now, we’re buckled up and looking forward to the next part of this rollercoaster ride. Will it be coming to an end any time soon? Only the Phantom knows!

As always, we also love to receive your comments – particularly any insights you have on the impact of the Google Phantom 5 update on your page’s real traffic.