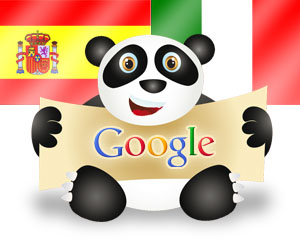 In Italy and Spain too, low-quality content has not been spared by the Google Panda update.  After already announcing the winners and losers in the USA, UK, Germany, France and Austria, the lists for two other major European countries are now available.

Just as before, on the basis of absolute and percentage values we are demonstrating which domains in these countries have achieved gains and losses in terms of their visibility in the Google search results. This is therefore not the same thing as a rise or drop in traffic as I explained in this blog post.

As mentioned in the previous analyses, the losers include local spin-offs Wikio, Suite101, 123people and Dooyoo as well. In contrast, the winners are even more greatly shaped by the heavyweights of the Internet in these two countries. What is surprising here is how much Wikipedia, Facebook and co. were able to grow or benefit. But see for yourself:

SEO visibility losers from the Google Panda Update in Spain:

What is striking the losers in Spain include numerous download portals (e.g. programas-gratis.net .44%). Yet top dog softonic.com was even able to achieve gains.  The page was still affected by the English-language Panda Updates.

As indicated above, the Spanish winners include many pages that already enjoyed a high level of visibility even before the Panda update. Add to this major publications like El Pais and El Mundo, i.e. pages with high-quality content.

Winners and losers of the Panda updates in Italy

In Italy, the situation for losers looks very similar that seen in Spain. This also affected Cylex (-74%), for example, which in Germany amazingly walked away unscathed. Here the initial list of all losers:

And finally, the profiteers in Italy. The list very closely resembles Spanish one as well. It should be emphasized, however, that Kelkoo surprisingly cropped up among the winners.

Further iterations are, of course, expected to follow in Italy and Spain as well. Candidates likely to be punished will be those sites ranking among the losers in other European countries. What do you think? How do you see Panda affecting Italy and Spain?