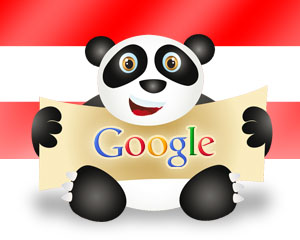 The Panda Update continues to hold European SEOs in suspense. Having already discussed the data from Panda in Germany and Panda in France , we wanted to show you what sites were affected by the rollout of the Google Panda Update in Austria.

Once more, we have calculated the winners and losers in absolute and percentage values. This provides us with a good picture of who lost heavily in SEO visibility, and who made it through ok. However, we should mention that a loss in visibility does not necessarily mean lost traffic since direct traffic, social traffic, super-longtail traffic, etc. are not included.

What is surprising is that some rather content-strong domains lost, and there is surely no better example than computerwelt.at. Plus, many of the domains that were caught by Panda in Germany also suffered visibility hits in Austria. Also worth noting are the many familiar faces on the Panda USA and Panda UK loser lists. Arguably, these domains were relatively strong in Austria and were then devalued, just like in the English speaking countries.

Also, rather surprisingly, arbeiterkammer.com – the employee legal advocacy site for upper Austria – appears to be one of the top losers. Here, it is difficult to say whether they were actually slammed by Panda or not. Six weeks earlier, the site experienced a similar drop, indicating that technical problems might also be the cause of their difficulties:

Winners on the other hand:

In comparison to other countries, the absence of YouTube and Facebook is striking. However, there were some sites like informer.com that won and also experienced growth in France, but not in Germany.  What do you think of the Austrian Panda results?