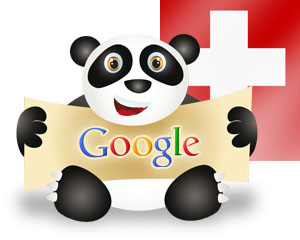 The Google Panda update did not stop at Switzerland and to fully assess the impact on the DACH region, this summary (following Panda in Germany and Panda in Austria) examines the Swiss winners and losers. As a side note, the keyword set taken into consideration included not only German but French and Italian keywords as well.

We determined the winners and losers based on the change recorded over the previous week in our organic performance index – i.e. our SEO visibility.  A drop in visibility does not necessarily amount to a drop in traffic because direct traffic, social traffic and super long-tail traffic etc. is not factored into the statistics. I provided a more detailed explanation earlier in this blog post.

The Panda update has resulted in changes on the following pages:

Losers following the Panda in Switzerland:

Among the winners in Switzerland are mainly news portals such as the Neue Zürcher Zeitung (+14%) and the Tagesanzeiger (+9%). As in other countries as well, sites like YouTube and Facebook didn’t benefit particularly greatly.

What is now interesting is the comparison of winners and losers from Switzerland with neighbors Germany and Austria. Do you see interesting differences?