Which websites won big in the Google rankings in 2018? Which domains took a hit in their SEO Visibility? Searchmetrics can reveal the biggest winners and losers in Google.com’s organic search results for the past 12 months. Our analysis includes a presentation of 2018’s most important Google Updates.

For this study, we analyzed the development of SEO Visibility for all domains listed in our US index tracked over the course of 2018. The list is ordered according to the absolute increase or decrease seen by the website, when comparing the level at the end of 2018 with that of January 1st. We have filtered out adult and illegitimate streaming sites, as well as domains that have migrated.

The year’s winners include several websites that focus on video content. The best-improved domain is one of Google’s own, as it is also part of the Alphabet conglomerate: The global roll-out of video carousels for a vast number of desktop search queries in the summer was the chief reason for YouTube’s SEO Visibility growing 79 percent over the course of the year. Many health websites also made the list of winners – as did several new domains emerging from about.com’s split, some of which were only launched during 2018. The most successful of these are verywellhealth.com, balancecareers.com and the thespruceeats.com.

If the top 100 have whet your appetite and made you hungry for more, you can download the uncurated charts of 2018’s top 1000 winners here:

The following table shows a selection of loser domains that suffered a significant decline in their organic visibility during 2018. As above, these are sorted by absolute change in SEO Visibility, but we have only included domains that lost at least 15% of their SEO Visibility. Please note that inclusion in this list does not necessarily mean that these websites have suffered an equivalent loss in traffic or turnover – this is just an indicator of how much less present they have become in the unpaid search results on Google.com.

The three most important Google Updates in 2018

In 2018, as you would expect and as has been the case in other years, it was Google Updates that caused the most significant fluctuations in the search results. Here’s an overview of 2018’s three most important Google Updates:

42% of 2018’s most successful websites belong to the category “Media & Events”. Above all, websites with video content saw big wins. As well as YouTube, we also find fox.com, pbs.com, bbc.co.uk and dailymotion.com amongst the winners. The primary reason for these websites’ success if the major Google Update in 2018, following which more video carousels were displayed in the desktop search results. 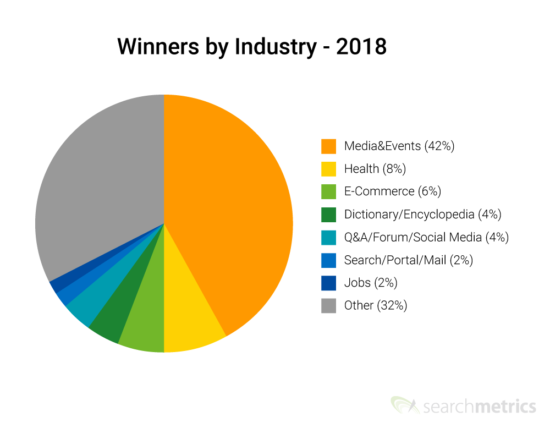 Websites in the health industry also experienced a lot of turbulence in 2018. Google’s E-A-T Updates in the second half of the year gave many health pages a boost – but at the same time many pages in this industry lost out, as they make up 8% of our 2018 loser list.

The most important search trends of 2018

Here, I would like to summarize the most important trends that helped shape Google search in 2018.

Google’s algorithm adjustment in June 2018 was the main contributing factor to YouTube’s 2018 success – the video domain was the biggest winner of the year in our analysis, with a 79 percent increase in its SEO Visibility. The Alphabet subsidiary benefited greatly from the integration of video carousels in the desktop search results, and an overall increase in the number of video results displayed.

It is not just YouTube. Other video publishers are also found among the websites with the biggest increase in SEO Visibility in 2018. These include fox.com, pbs.com, bbc.co.uk and dailymotion.com. With this update, Google greatly expanded the number of search queries that return videos in the results. As Searchmetrics’ data shows, 74 per cent of search results included a video integration in late September. Towards the end of 2018, the number of search results with videos dropped back to 62 percent. This is shown in Searchmetrics’ SERP Features data:

2.      Turbulence in the health industry

Your Money or Your Life: This motto had a big impact on the health industry in 2018. The Google E-A-T Update in August and its iteration in October caused enormous turbulence in the search results for sensitive topics i.e. for issues where incorrect information could potentially harm the health or financial situation of the searcher. Google raised its requirements regarding expertise, authority and trust, creating the name of the E-A-T Update.

The chart below shows the SEO Visibility of the health industry’s biggest winner and biggest loser: webmd.com is the winner, medicinenet.com the loser. You can see the big change in early August, which is when the E-A-T Update struck, and the continuation of the trend, particularly for medicinenet.com, in mid-October, where this domain experienced a second big drop.

Today, about.com’s domain split – that saw the creation of a great number of domains, each with a clear topical focus – can be considered one of the most successful relaunches in the history of the web. Here you can view the entire website portfolio of the parent company, dotdash.com. Several of 2018’s winning domains are newly-founded second-level domain splits from what used to be the about.com universe. The leading lights are verywellhealth.com, verywellmind.com, verywellfamily.com, thebalancecareers.com, thebalancesmb.com and thespruceeats.com

We should point out, however, that some of the first-level domain splits have lost a great deal of Visibility: thebalance.com lost 84 percent; thespruce.com lost 76 percent of its organic visibility.

The following charts show us the Visibility of the three biggest domain splits coming from the about.com universe. The development in SEO Visibility for the health and wellness domains, verywell.com, the home/living domains thespruce.com and the finance domains, thebalance.com.

All of these have in common, that the previous main domain lost a great deal of SEO Visibility following the second-level split, and the second-level domains have seen continuous growth, even if they have not all, when combined, reached the Visibility heights the main domain enjoyed at its peak. If you want to learn more about about.com’s success story, then you can read the analysis in our blog post from May 2018: How About.com Got Its Groove Back With Domain Splitting

What does about.com’s example tell us? Domains that have been amongst the losers in the past or that have wanted to improve their performance, are well advised to rework their content and optimize the user experience on their site. Google rewards clearly clustered content silos that combine excellent content with a top-drawer user experience.

If you are interested in using our Searchmetrics products more effectively, then you can arrange an appointment with our Digital Strategies Group to gain additional strategic support to increase traffic and sales for your domain. Our consultants will be happy to have a chat and explore your needs: