As another year in SEO ends, it’s time to take a look back at the rising and the falling stars in SEO Visibility for 2014, and most importantly, why the rankings changed.

First, there is much more quality to be found in the search results, no doubt due to the effects of Panda, Penguin & more. Big brands are among the Winners for 2014, but some websites on the list have also lost visibility for some features. The “Losers list” also features information aggregators, gaming and price comparison sites. 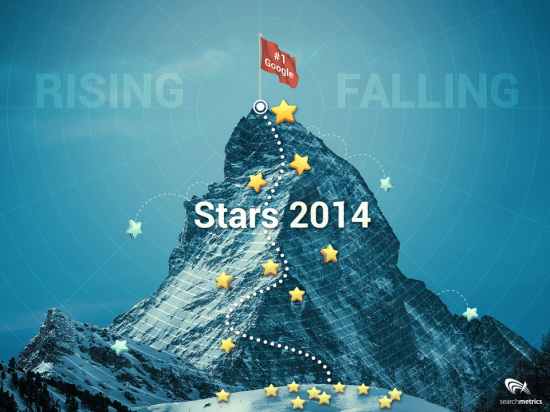 Calculation of the data and domain lists is based on the SEO Visibility score of the domains analyzed using a wide range of data points, and we have compared these to the average domain scores for 2013.

Because individual data points are susceptible to short-term fluctuations, trends, re-launches etc, we have not just compared the data of one specific calendar week between years. Instead, we have examined the top Winning and Losing domain rankings based on absolute percentage gain or loss. That is to say that we have looked at those domains with the largest absolute Delta, ordered by the relative Delta, and ignored those features that had too much ‘white noise’ to take an analysis from.

Our primary concern is to analyze long-term trends in the average SEO Visibility development of sites, and to achieve this, we decided to neglect short-term fluctuations. The result of this is that even some Winning sites could be subject to a downward trend, but are nonetheless considered Winners (the counter example is the ‘Losing’ site retailmenot.com). This type of analysis has the disadvantage that current trends in a specific period (e.g. the last three months of 2014) may be less visible, but the advantage is that these short-term fluctuations in ranking balance out over time, and this allows us to see the general trend without being biased by these outliers.

Below is a list of domains whose relative SEO Visibility loss over the year (cumulative) was greater than 10%. The following lists are not exhaustive, but serve to illustrate the higher-level trends:

The Winners list below is a list of domains with a relative increase in SEO Visibility of more than 10%:

The list of losers deliberately includes re-directed domains. These domains are not really considered ‘Losers’, but they do neatly illustrate the effects on SEO Visibility of such a re-direct, and how long it takes for the site to recover to previous levels of performance.

‘Mayoclinic.com’ was moved to the .org TLD in January 2014. This was accompanied by an immediate increase in SEO Visibility for the .org domain, but it still took 8 months of gradual improvement until the previous levels of visibility were attained.

‘Rapgenius.com’, who suffered a Google penalty a year ago (see screenshot below) re-directed in mid July 2014 to ‘genius.com’. Here we can see a similar, yet slightly different picture:

In contrast to the Mayo Clinic, Genius.com had a stepped rather than continuous increase, with the original site values being regained after only three months. The decrease after this was due to other reasons, to be part of the discussion later on.

Take Away: As a rule, re-directs do not bounce back to their previous status immediately (with some exceptions proving the rule here – and there is also always the question whether the content is moved to a completely new or an already existing domain, or if the content is consolidated with other content that already exists). Instead, we observed that the increase in SEO Visibility happens gradually over about three months on average (plus or minus).

Note: We focus here less on individual domains, and more on trends that can be generally observed that allow for conclusions on the overall development of Google and Search. This approach is easier to understand if the domains are characterized by industry sector. These industry classifications are provided in the lists.

Let’s first investigate domains that have lost out due to Panda, content and relevance factors. Amongst these are news aggregators such as citi-data.com, whitepages.com (which suffered from the Panda update), and patch.com. The relentless decline in SEO Visibility that patch.com has suffered seems like what is called a Slow Death phenomenon (without having had a deeper look at it), looks like this:

The following issues are mostly subordinate to this whole complex area of ‘Content Relevance’ and still make up an important part of SEO Visibility development:

Among the losers from 2014 are several ‘News-based’ domains, amongst whom there are some famous brand names. Huffingtonpost.com shows Panda-related spikes for the Panda 4.0 release (May 2014) and the Panda 4.1 release (Sept/Oct 2014):

Looking at losing keywords after Panda 4.0 (25.5.2014), there is a long list of brand names (celebrities are also included in this category) that have fallen dramatically in the rankings, and in some cases have dropped off the index completely. 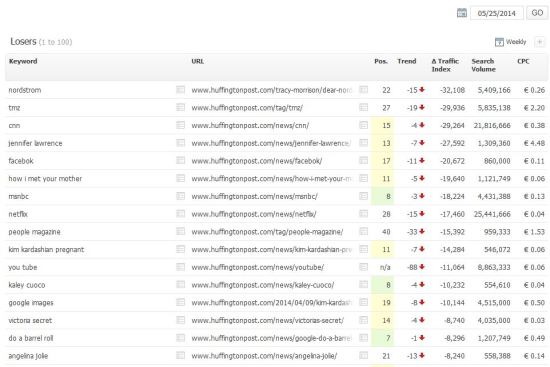 For latimes.com, it’s a similar picture. Similar domains have lost out due to repetitive ‘Evergreen content keywords’ such as “Kanye West album”, “things to do in la” or “flu symptoms”. Google has been working here evaluating the algorithms for brands and keyword categorizations (News vs. Evergreen). The transitions between them are now quite fluid.

2. The “plight” of comparison and classified sites?

For brand keywords, price comparison sites are in direct competition to Google, and are having a hard time competing with Google’s internal services. This relates especially to Product Listing Ads and the sense that Google would like to have more diversity on transactional Keywords.

The impact of Panda 4.1 on ‘Retailmenot.com’ was similar to the effect it had on the job portal ‘indeed.com’, where brand keywords lost out (in the latter case you can also see the step-by-step loss due to Panda 4.1). But this does not mean that you should write Listing or comparison sites off. I believe that those who put hard work into the mission to create an additional benefit for the user (for exemple through a higher variety of products), will still benefit in the future, since there is no reason for Google then, to direct the user just to shops. Yet, Google will of course try to avoid one-sided search results and ranking price comparisons for transactional keywords.

However, the coupon provider retailmenot.com has now come back stronger than before. I’m curious how this will develop further, since Google is continually working on the SERPs.

3. Directories/aggregators (e.g.: Lyrics) on a downward trend – with some exceptions!

Finally, a brief comment on the topic of aggregators using the example of Lyric portals (Songtexte.com etc.), which shows that, by utilizing other trends, it is possible to make a positive difference.

Lyrics portals – just as many online reference-services  – belong to the group of domains that have lost visibility in 2014 (and before). So what is the problem here? Duplicate content! What value does it provide to the user when a site offers content that is replicated umpteen times in the same way? Poor user signals are pre-programmed here, because sites get lost in the crowd without standing out. It is the same with industry address directory portals.

Songtexte.com shows that there is another way:

Although the domain is German and not in English, and it has a German navigation menu, the page has seen a steady increase in SEO Visibility despite some issues towards the end of 2013.

One reason for the good ranking in google.com is of course the amount of English content, namely the lyrics themselves. But if you look at the page, the probable reason for their competitive advantage becomes clear: 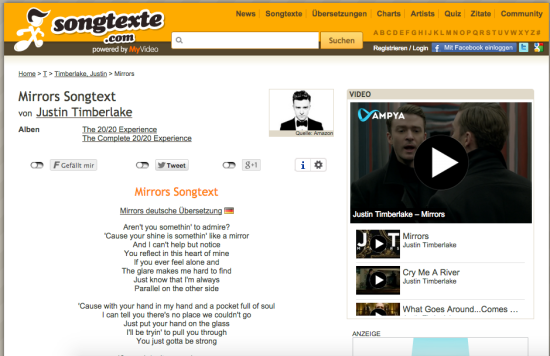 The site belongs to the ProSieben Sat1 family (a large German private channel group), and it co-operates with its sister sites, myVideo and AMPYA, whose music videos are integrated alongside the lyrics. In addition, a complete artist playlist opens immediately. On its own, this measure increases the time on page hugely (buzz word: User signals). There is unique content on the site (for example, current news), surveys & quizzes for user interaction, text translations and user accounts. There are numerous comments each landing page I have clicked, showing strong user interaction.

Admittedly, this is a page with a great brand and strong collaborations, but they do it right. How many similar projects, even for major brands, have we seen fail? To be part of a great brand often makes things more difficult, not easier. However, the added value offered to the user is clear, and this adds to the positive development – which is opposite to the trend of their competitors.

It cannot be said often enough: The focus is relevance, but beyond that, you have to stand by USPs of the competition to generate user loyalty. Only those sites that provide the user with an added value that maintains loyalty (in any context), will have long-term success. User signals are, in my opinion, the most important metrics by which relevance is evaluated, as the user signals only increase where there is something of value to find.

In addition, Google has been working on brand keyword rankings, which have affected both price comparison sites and news portals. The latter also shows that Google has tinkered with keyword categorization that partially overlaps with brand-categories.

And one last thing, which is rather a fun fact… even Wikipedia.org was among the losers in the US Index, since a loss of even 2.5 percent in absolute terms is crucial.