On Monday, searchengineland.com wrote about the -25% organic visibility drop of expedia.com. We provided the guys from SEL with some data and a few screenshots of our software, the Suite. Now, I want to provide you with a deeper analysis for a closer look at what may have really happened.

We as outsiders just don’t know, what the reason of Expedia’s current situation may be

and whether the domain will recover soon or even lose more visibility. But I’ll try to investigate this question by interpreting our data and looking at the domain in detail. At first glance, the signs point to a penalty by Google due to a bunch of supposedly unnatural links to some of the domain’s major URLs.

You can check out the current SEO visibility of expedia.com or any other site by yourself with our software: http://suite.searchmetrics.com/en/research/domains/organic?url=expedia.com&cc=US or contact us for more details about our Enterprise SEO Platform: http://www.searchmetrics.com/en/contact-software/?contact=10

Back to the topic: I decided to split this post into several parts. I start by giving you a deep analysis based on our software data indicating that the domain expedia.com has experienced a severe drop regarding its SEO Visibility. In the second part, I gathered some examples that could point to a reason for this. Finally, I provide some advice about how sites such as expedia.com might recover if they really have been hit by a Google penalty and how such a severe drop may be best avoided before even happening.

First, let’s have a look at the current SEO Visibility graph again. 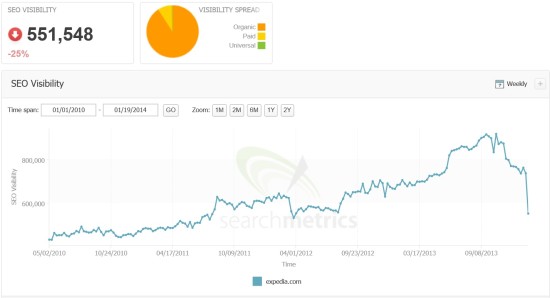 You can clearly see that the domain had a good growth over the past 4 years and seems to be in some serious trouble and falls back on a level they had in around 2011. Let’s take a closer look at the data.

At first glance, we can see that expedia.com has lost its good ranking positions for strong short head keywords like “flights”, “hotels”, “airline tickets” mainly on the homepage and for many of their categories. Here is a selection of the top loser keywords being affected by the current drop: 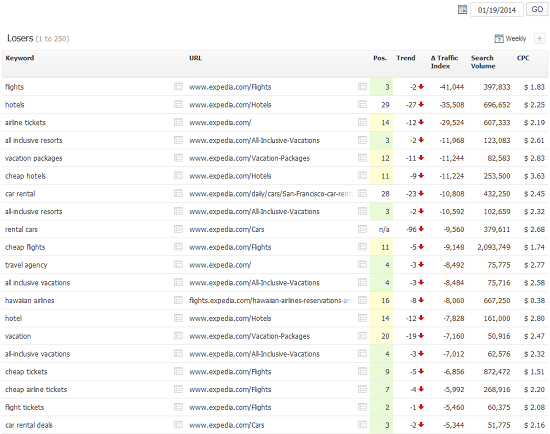 When we structure this data according to the URLs that have lost the most short head rankings this week in connection with an estimation of the lost traffic on these URLs, we get the following table:

Consequently, a possible conclusion that can be drawn (without an official confirmation from Google yet) is that it looks like a keyword penalty of the linked pages and this penalty affects related landing pages and keywords.

Why did this happen?

First assumption: This may be caused by the heavy overuse of hard anchor texts, that means, link texts that include, or even completely consist of, keyword(s) the targeted domain, or URL respectively, is optimized or wants to rank for (usually keywords with high search volume or high CPC). Strategies like this, as a method to improve the link profile and therefore the visibility of a domain, have been pretty frequent in SEO until quite recently. In fact, some webmasters actively encouraged other domain owners to link to their page using a certain keyword as an anchor text.

However, hard anchor texts are of course part of a “natural” (= not manipulated) link profile as well, but when there is a high number of domains linking to a certain URL, always using exactly the same keyword (not the brand name), it can appear at least a little bit suspicious, because there is the aftertaste that those links may have been artificially acquired.

At least, this is a strategy many of the Google penguin algorithm update victims suffered from when their domains dropped. This kind of technique has worked for a certain time, but nowadays it is absolutely outdated SEO. 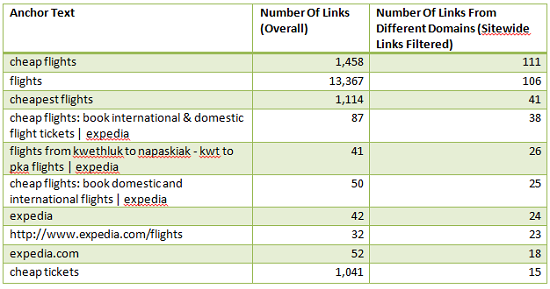 I am not saying that expedia.com definitely manipulated their link profile (by themselves) – because we don’t know. Actually, they have huge number of very high quality (brand) links that feature “expedia” or the URL “expedia.com” as anchor text. But the fact is – their link profile also reveals a high number of recurring ‘rich money’ keywords in the anchor text. Let’s take a closer look at this assumption by reviewing backlinks and the anchor texts linking to one of the top loser URLs: www.expedia.com/Flights (Click on the picture to watch the current link status live in the Searchmetrics Suite. You’ll see their links pointing to the Flights category page with incoming links that contain “flight” in the anchor text): 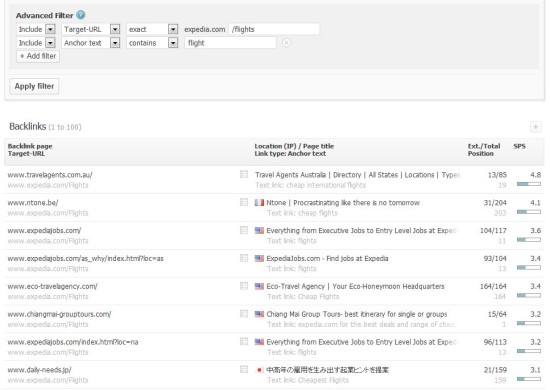 As you can see, most of the incoming links use hard anchor text for the target page. Furthermore, the keywords that lost rankings are used very frequently as anchor text. Thus, there seems to be a connection between anchor text, keyword and dropped URL: 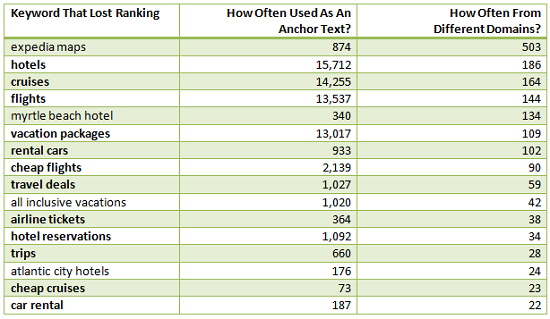 There are also related keywords that have used the anchor texts and have also lost rankings – like “flight ticket”, “book a flight” or “renting a car”.

This kind of “collateral damage” is very likely to appear when a domain drops in visibility. Because the URLs that lost rankings (and therefore traffic) – especially the homepage – also pass the “link power” they earn from backlinks to each of the hierarchically subordinated pages. And consequently the subordinate pages also lose visibility when this link power is gone.

Taking a further look, we examined the top loser URLs structured according to the ones having the most backlinks from different domains:

We can see that the URLs featuring the most backlinks, are among the top loser URLs – indicating that this is one of the main reasons for the recent drop.

In the last three years, Google has greatly improved its processes for discovering bad link schemes and improving the relevancy of search results by filtering low quality sites out of the index. The main instruments for this development (among others) may have been the Penguin Update, which addressed link schemes, and the Panda Update, which focused heavily on content quality. In the course of these two updates and their numerous iterations, many irrelevant domains and a lot of spam has disappeared from the search results  -even if were “optimized”). On the other hand, many domains from brands have strongly improved in terms of visibility -even if they haven’t been “optimized”.

It’s possible this may be a reason why expedia.com was not really affected by one of the major algorithm updates. A fact, that now may now have triggered Google to take manual action?

Practical perspective – what some examples show

In the second part of this post, I want to give some examples of domains, links and anchor texts that have been used in connection with expedia.com. But before that, I want to remind you of Google’s “Webmaster Guidelines”, especially the areas concerning link schemes:

“The following are examples of link schemes which can negatively impact a site’s ranking in search results:

Actually, we found a considerable number of examples that fall under the above categories in the link profile of expedia.com. It could be that they are likely to have been the cause for the domain’s current situation.

#1 – Example 1: Keyword “Cheap Flights” linked to expedia.com/Flights out of the content. 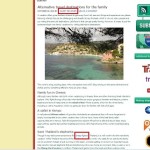 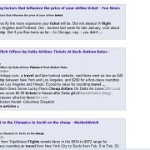 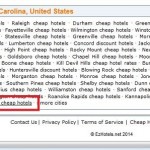 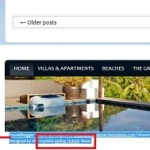 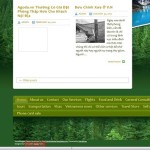 Conclusion: It looks like a Google Penalty due to keyword-targeted hard anchor text links

I think, the preceding analysis can be concluded with the following points summing up the data and examples, I have given.

Summary: Many low quality links to major URLs of Expedia.com

UPDATE: What has happened before?

A SEO services agency named Nenad SEO has published a blog post dealing with link schemes of big brand domains – especially focused on expedia.com – already in the mid of December last year. The author “Nenad” already investigated several examples of the kind I have also presented here (using nearly the same kind of highlighting the links btw.– which is weird). He also reveals a connection between several guest bloggers as well as some Twitter accounts (influencer?) to create social signals and/or traffic. In fact, Nenad’s analysis is quiet striking and really worth a read. However, his blog post was preceded by a very interesting online-discussion in this forum involving a (former) leading Expedia employee who also wrote a post dealing with the issue on his own domain.

Interestingly, Patrick Altoft, who also made Expedia’s visibility drop public on Twitter a few days ago, has been already involved in the discussion as well, saying:

“Google has no tolerance at all for anybody doing stuff wrong today whether you are a big brand or not, especially if it gets in front of the right person at Google.”

How to recover? – What expedia.com should do now

Expedia is not the first domain to suffer from a loss of SEO Visibility. In fact, other domains have been hit even harder either by a Google Update or a Penalty. However, Expedia is a big brand and a big domain. They have much hight quality content and there are many examples of very successful recovery stories all over the web – Overstock.com for example, or J.C. Penny, who got a second chance from Google, just to name two. And just about a month ago, I wrote about the 92% drop of rapgenius.com – and all they needed were a few days to recover. Not always to the visibility level they had before, but better to recover and grow again from that level than staying with a penalty.

I think, it should be pretty clear for them what to do (and I am repeating myself from the rapgenius blog post). If they really have actively forced some links to be placed, acquired guest postings with hard anchor texts or have been engaged in any other strategy Google clearly cautions webmasters against (which of course we don’t know), they should stop following this strategy immediately in the first instance ( if they haven’t already done so).

It is also possible that Expedia might either have worked together with a third-party agency still using these techniques or these links being a “relict” of past SEO efforts. The phenomenon, that since 2011 there have not been launched any domains with those footer keyword links features in a wordpress template (see #3) may be a proof for that. However, Expedia could also even be a victim of a so-called “negative SEO” campaign, but I consider this to be rather unlikely.

Whatever the definite reason may be, they should, secondly, make a list of all these links, try to delete them (if not possible, use the Disawow Tool) and reach out to Google to start an honest communication about any noticeable problematic links – whether self-inflicted or not.

Finally, expedia.com should make a reconsideration request when the link profile has been cleaned up. I’m pretty sure they will revover when following these steps.

You can also check out the SEO visibility of expedia.com by yourself with our software: http://suite.searchmetrics.com/en/research/domains/organic?url=expedia.com&cc=US