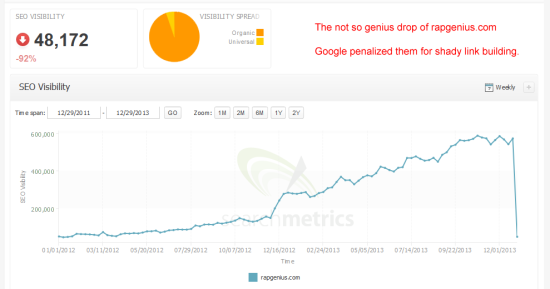 As Barry from searchengineland.com (http://searchengineland.com/google-has-officially-penalized-rap-genius-for-link-schemes-180777) and others wrote on December 25th, rapgenius.com (a service that lets users look up song lyrics and discuss their meaning) officially got penalized from Google. In a tweet on December 24th Matt Cutts revealed Google was looking after RapGenius shady linkbuilding methods and bingo – a day later the site has gone. 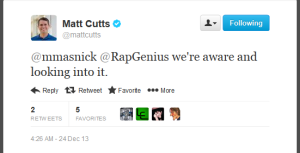 The dimensions of the penalty have not been published by any other blog yet. So I thought it makes sense to do some analysis and post screenshots of the current SEO visibility of rapgenius.com. To be honest I wouldn’t like to be in their shoes now. It’s not just a small penalty of a penalty on a URL level. They lost nearly all their visibility. The drop was 92% according to the analysis!

They still have some rankings, but overall their SEO visibility has dropped to a level they had in January 2012. I won’t comment what they did. There a lot information shared about using their affiliates to place links to rapgenius.com and in exchange the affiliates or bloggers got promoted by RapGenius. More background about the story: Google banished RapGenius. But whatever they did, their former SEO visibility was awesome. They were within the Top100 best ranking sites in the US, and that’s within 2 years. This is an incredible growth.

They lost on nearly all their important lyrics keywords

If you check the list of loser rankings you see that there is no pattern in the drop. Many strong keywords dropped into the nirvana, some to page 4 or 5. And it’s obvious too that this isn’t a drop on a URL level. It is a drop on the whole domain. For me it seems that Google mainly devalued the site’s incoming links and additionally gave them a keyword penalty for the anchor texts of the incoming links. Or just devalued all keyword links and everything where “rap genius” or similar was in the anchor text. 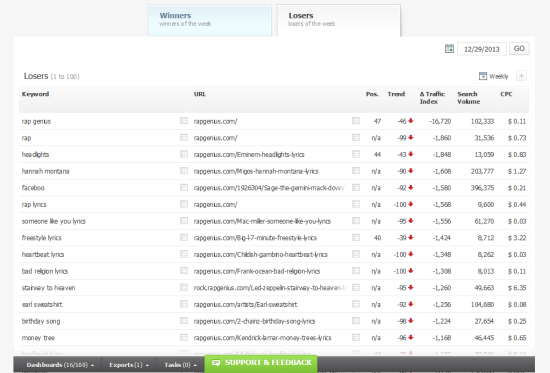 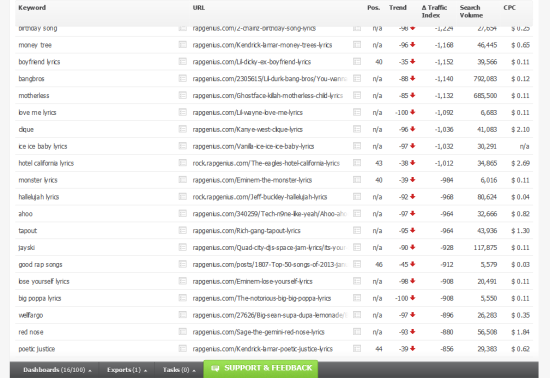 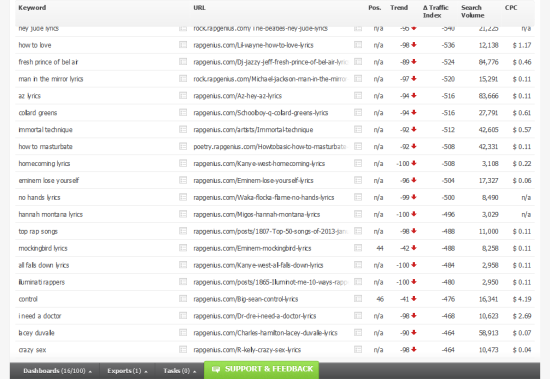 If I were rapgenius.com I would definitely check my link building strategy and make a list of all links I forced to be placed. Then I would reach out to Google and tell them what I did. Possibly Google just devalued too many links (overreacted). If not RapGenius should remove all these links and if that isn’t possible there is still the Disavow option. After the cleanup they should make a reconsideration request.

If you need the SEO Visibility on the go, download our mobile app: http://www.searchmetrics.com/en/seo-link-analyzer-app/