by Tyson Stockton and Sebastien Edgar 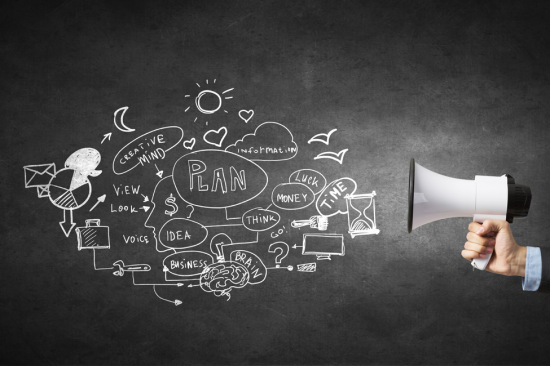 As the search giant, Bing and others tinker (sometimes publicly, sometimes not) with their respective algorithms, marketers must always remain on war footing to respond quickly to the seismic ripples that such actions could bring to their businesses, according to presentations at the recently concluded SearchLove Boston conference.

Just as massive troop movements are being superseded by drone warfare, online search no longer is simply a province of good keywords and backlinks. Marketers must become more familiar with new areas such as machine intelligence, voice search and strong technical SEO, according to SearchLove’s A-list group of speakers, including Rand Fishkin, Larry Kim, Mike King, Greg Gifford and our own Marcus Tober. The conference, an intimate gathering of about 200 people, took place May 3-4, with Searchmetrics as its principal sponsor.

Out With the Old

Searchmetrics founder Marcus Tober reinforced the point during a humorous May 3 slide-assisted presentation, saying old-school SEO tactics are giving way to using data to better understand the meaning behind searches. In short, it means recognizing the importance of great content, understanding the path of machine learning, and sifting through dynamic change in individual product segments such as e-commerce and healthcare. 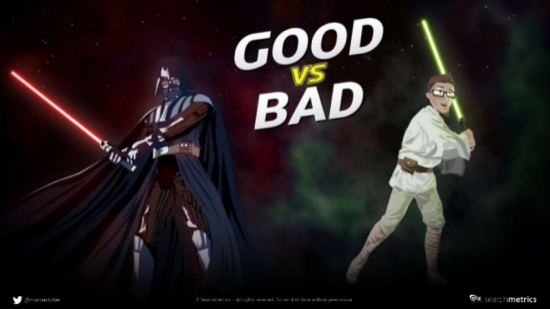 SEO tips just a few years ago were a litany of sameness: keywords, keywords and more keywords. In other words, find good keywords and stick with them on page after page of your site. In Marcus’ words, that may be good tactics, but bad strategy. Google is delving into a mobile-first strategy of constantly evolving content and understanding user intent.

Another thing he noted is that with machine learning, Google and others already know these same tips and tricks you’ve been employing for years and increasingly are weighting them as less important than other factors in returning search results.

The Google algorithm dynamically adapts its ranking signals based on industries. Take backlinks, those hyperlinks from a Web page back to your own site. Though inbound links are counted as a recommendation to view a website, there’s still a great deal of debate about their importance in today’s world of SEO.

That’s why I’m particularly excited about our next release of the Searchmetrics Ranking Factors Study, which for the first time will be broken out by industry. Later this year, we’ll be able to easily determine how ranking factors differ in key industries. Marcus gave us a sneak peek: 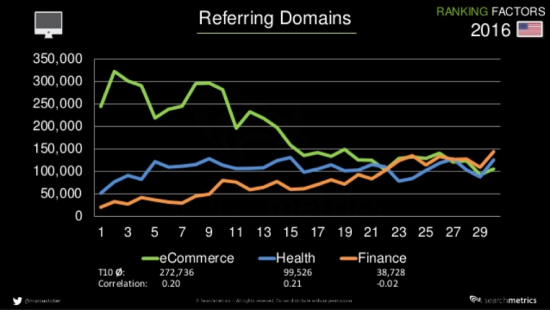 In the chart, we can clearly see how backlinks and referring domains vary in importance based on industry. E-commerce shows a correlation that is more similar to what we are accustomed to seeing in previous year’s studies. But breaking them out by industry, you see in health and finance (industries in which Google has been vocal in highlighting their potential impact to users’ well being) there is little to no correlation between backlinks and ranking. There’s actually a negative correlation in finance.

How do you stay relevant in such a competitive and evolving landscape? If search engines are understanding content in a more holistic manner, we also must understand user intent to ensure such content is addressing that person’s needs. That means data drives content development and vice versa.

Machine is becoming prevalent even beyond SEO – just check out how Gmail now determines which email is important, what’s less important and what’s junk. Facebook supplements curation of its News Feed with it. There are tons more examples that highlight that the machine learning genie is long since out of the bottle.

Mike King, Managing Director of iPullRank, says a lot of people may think content these days is king (and they’d probably be right), but that you shouldn’t then ignore the continuing importance of technical SEO. He did a great job of providing tips for today, while also pointing to where the industry is headed.

His topic went from Javascript crawlability, all the way to TF*IDF, and how one should not always move in lockstep with Google verdicts. While Google says 302 redirects passed page rank, his analysis found otherwise. Changing those 302s to 301s resulted in a large bump in traffic: 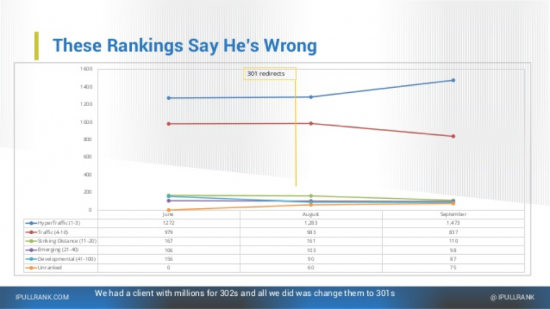 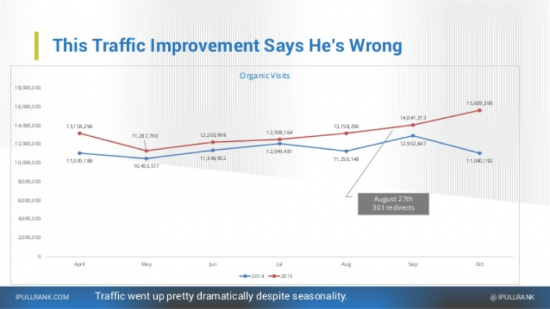 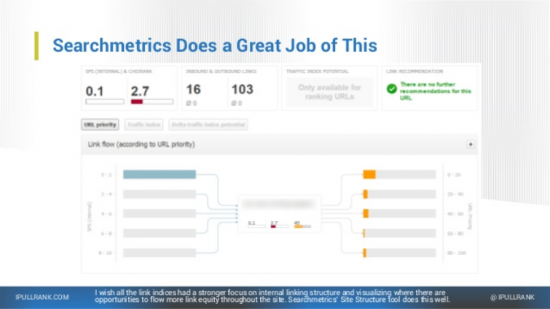 Perhaps of the greatest new tool (and threat) to search in the near future will be digital voice assistant such as Siri, Alexa and Cortana. RankBrain most likely will interpret and work with voice search by attempting to understand what the user means, not what the user says.

Without going too deep down the rabbit hole, a great example is when someone searches for “London tube stations.” The user probably doesn’t want to learn about the history of tube stations; instead, he or she probably is looking for the nearest London tube station. In that case, Google quickly has correlate where the user is, which device the user is on and potentially the time of day (to calculate optimal travel times). 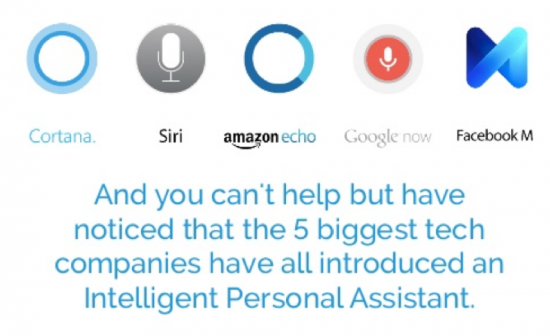 I know what some of you are thinking: “Voice search?!? Are you living under a rock and have not heard some of the crazy responses from Siri and others?”

The truth is, they’re getting better all the time. If you don’t believe that, click on this video:

This is Your Brain on RankBrain

Getting back to RankBrain, why is it such a big deal? The obvious is that Google says it’s one of the three most important factors in its ranking algorithm. For the uninitiated, RankBrain uses mathematical processes and an increasingly sophisticated understanding of language semantics to learn more about how and why people search – and then apply those conclusions to future results.

Mary Bowling, co-founder of agency Ignitor Digital, says that means you can’t ignore it even in local search. She gave tips on how to make your site clearer to Google by increasing user signals and adding more pictures, among other things.

Another interesting point that Mary touched on, was using Schema data for Local Search. Essentially schema is “not a ranking signal, but a clarity signal” – say Mary. Generally, Schema.org helps Google and other search engines understand the page structure and content of that page better by marking elements. Therefore, including Schema.org won’t make you rank better, but might provide some rich snippets in the Google search, increasing CTR.

Wordstream’s Larry Kim also spoke on how RankBrain looks to the softer side of search. He presented research that show how high CTR long-tail rankings get an additional ranking boost by looking at the emotion behind them. Essentially, the same emotions that make people share things can cause high CTR. That suggests CTR is a correlation of social signals and organic rankings.

Search engines and search techniques are changing. The phrase “adapt, or die” is extremely appropriate in this situation, and it’s up to you to stay abreast of market trends, jettison old school SEO tactics, and optimize your site to help the user and search engines understand your content as best as possible.