The Google year 2015 brought with it numerous updates and turbulent visibility changes for many US domains. The following concise analysis takes a look at the year’s biggest winners and losers of 2015. We also discuss the effect of Google updates, current search trends and offer key take-aways for your site in 2016. Read on. 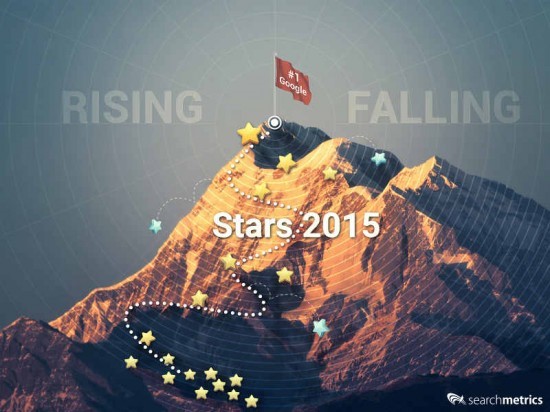 The clear overall winner is content. Domains that offer unique, helpful and current content were typically the biggest winners for 2015. Publishers and news sites are among the biggest winners overall, as their main product is up-to-date, relevant and often holistic evergreeen content. Almost every other winner was a publisher.
The losers are more widely spread across different branches. We will take a look at the general trends causing visibility losses in more detail later in this article.

Who are we talking about? – A quick note on the data we use

Top winners for Google US 2015

While publishers were typically amongst the biggest losers last year, this year they are amongst the biggest winners. The biggest winner, theatlantic, has seemingly recovered from the massive drop in visibility due to the Google Core Update. (By the way: Clicking on each site will take you directly into the Searchmetrics Suite, where you can see the visibility curve and even how each site reacted to each Google update – take a look it’s pretty cool.)

Now let’s take a look at a selection of the losers for 2015. Here we see some big names near the top of the list, with twitter and yelp experiencing particularly heavy losses. (In case you missed it: Clicking on each site will take you directly into the Searchmetrics Suite, where you can see the visibility curve and even how each site reacted to each Google update). Being a loser doesn’t necessarily mean they did something wrong. Losing visibility could have multiple reasons from deleting content/products, a relaunch with potentially technical issues, duplicate/thin content etc. In this post we are not judging what the reasons for the visibility loss were, we aim to provide a neutral observation of what happened over the year.

So what were the main causes for the changes in visibility amongst these domains in 2015, and what lessons can we learn to stay high in the rankings this year?

Google updates were the predominant cause for much of the turbulence in the search results – this is not something new. However, the chart below illustrates just how much an effect Google updates had in 2015. This chart shows the average SEO Visibility of the top 100 winners and selected losers respectively over the course of 2015. 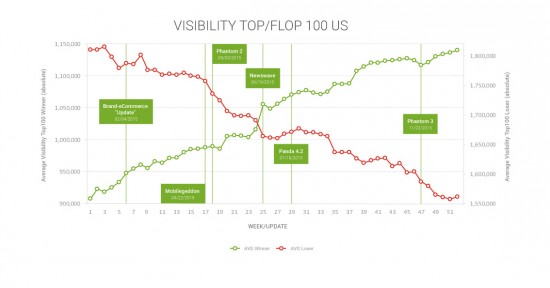 Newswave Update, June 2015: This update, not officially confirmed by Google, gave numerous publishing sites a considerable boost. This update rewarded sites following the query deserves freshness (QDF) rule, i.e. that content should be up-to-date and relevant. Suddenly many sites that ranked for brand keywords, entities and trending topics received a boost in rankings.

Panda 4.2, July 2015: This update seemed to punish content aspects such as redundancy, irrelevance and spam. As the roll-out of this update lasted several months, an exact analysis proved difficult.

Quality Update / Phantom III: The last update in 2015 had massive effects on the SEO Visibility. This update seemed to lift the problem of duplicate content (lyric sites). In addition, detailed content is not a must, but rather a question of user intention.

By the way: our analysis of the yearly visibility changes shows that domains in the US tend to be the first to feel the effects of a Google update. Changes in international search results can hit up to two weeks later.

Many of the changes in the SERPs are content related. Publishers were amongst some of the biggest winners this year. The Guardian was amongst the losers in our 2014 end of year analysis, but this year is in the top 10 biggest winners. In around mid-2013 The Guardian underwent a relaunch moving from guardian.co.uk to the guardian.com, which when you look at the visibility the relaunch was heavily successful. But if you look at 2014 only, you’ll see they lost visibility. In 2015 the newspaper has seen steady increases in visibility, which I know is based on their hard work to optimize their content.

Google is continuing to reward sites that offer good quality content that offers a good user experience and fulfils the user intention. Newspapers and magazines usually offer comprehensive content on a subject, and this is one of the reasons that many of our winners come from this branch.

Q&A/ how to sites – wikihow and howstuffworks

We have already noted above that these websites were hit hard by Phantom II.

The background for this was believed to be that a lot of these pages generated revenue through too many ads above the fold and also duplicate content.

However, after Phantom III it seemed that the duplicate content issue had been – at least partially – resolved. If so then why are these sites still suffering such sustained heavy losses? It seems that these sites are either unable to fulfil user intent or expectation with their content regularly enough to rank high across the board. While a few years ago it may have been enough to have a lot of content on one subject hosted on a domain, this has not been the case for quite some time.

Let’s have a closer look at howstuffworks.com: 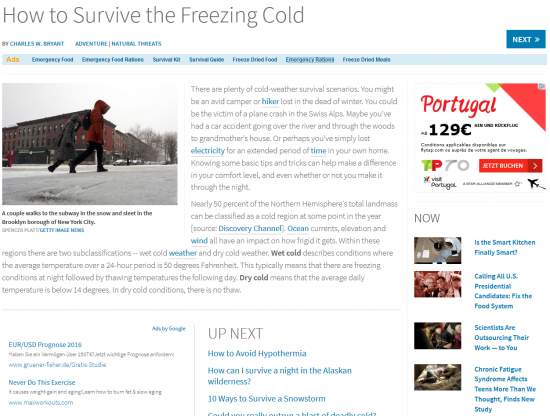 This page is a good example of an average user experience on howstuffworks. The ads top bar is a little misleading as it looks like a typical navigation bar, but clicking leads you away from the site. The reading experience is also often interrupted by ads, seen here in the bottom left of the screenshot. This article is located on subdomain adventure.howstuffworks.com – however clicking on similar topics does not always lead you to the same subdomain. Often navigating from one section to another can be pretty tedious work for the user.

Turning to one of our winners allrecipes.com exhibits a relatively easy to navigate site and has a logical site structure. Subdirectories are listed along the top bar, and recipes are weighted by user reviews, ensuring that the site is also offering the most relevant and useful content. Also ads are typically located to the right of the screen and don’t interrupt the reading process as much as our two loser examples. 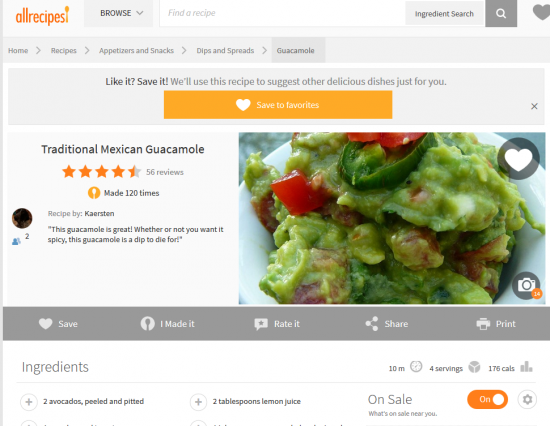 Generally speaking, websites that accurately fulfil user intent and provide relevant well ordered content are amongst the benefactors this year. Google updates and technical factors aside, if a site does not fulfil user intent then it will have a hard job ranking highly. User intent should be the epicenter of your online efforts

A brief note on mobile friendliness

As we have said throughout 2015, user intent is paramount for maximizing content visibility. If this intent is not taken into account, sites run the very real risk of losing visibility. Try to ensure that your site meets the following criteria:

How did you site perform in 2015 – are you amongst the losers or the winners? As always, we would love to know what you think our or analysis, so let us know in the comments below.