App indexing can increase traffic, conversions and app installations—so why isn’t everyone doing it? 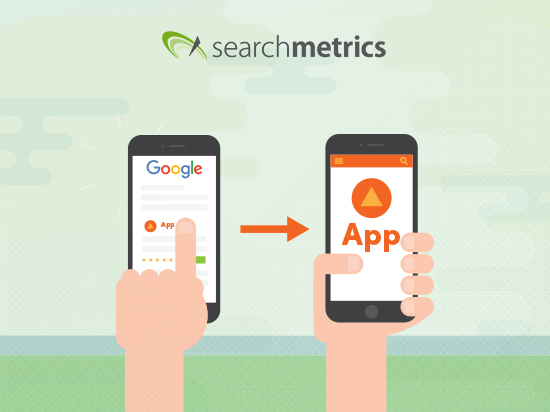 “Wouldn’t it be cool if you could give your users the choice of viewing your content either on the website or via your app, both straight from Google’s search results…Just like it crawls and indexes websites, Googlebot can now index content in your Android app.”

Since then, a full 70% of top ranking websites with an Android app, and 81% with an iOS app, are still not making use of app indexing. This means your competition likely isn’t using app indexing. So if you have an app, you should jump on it—now.

App indexing offers online marketers the ability to be first to market in this new, more innovative way for Google to display app content right alongside mobile search results. In today’s post, we’ll take a closer look at app indexing and app-streaming—still in the test phase for Google —as ways to explore new marketing opportunities.

What exactly is app indexing?

The mobile web is a dynamic, referential system of interconnected websites. Apps, however, have traditionally been a closed ecosystem—walled off from the rest of the world. App indexing is the connector between these two systems.

By using the API or building the correct code into your app allows Google to crawl an app the same way it crawls deep links of a website. This means that when a user makes a relevant search, Google can now list a specific page of an installed app, instead of just the standard landing page of a website.

From these search results, the user can now jump outside of the browser, directly into the content of an installed app. Here’s an example: 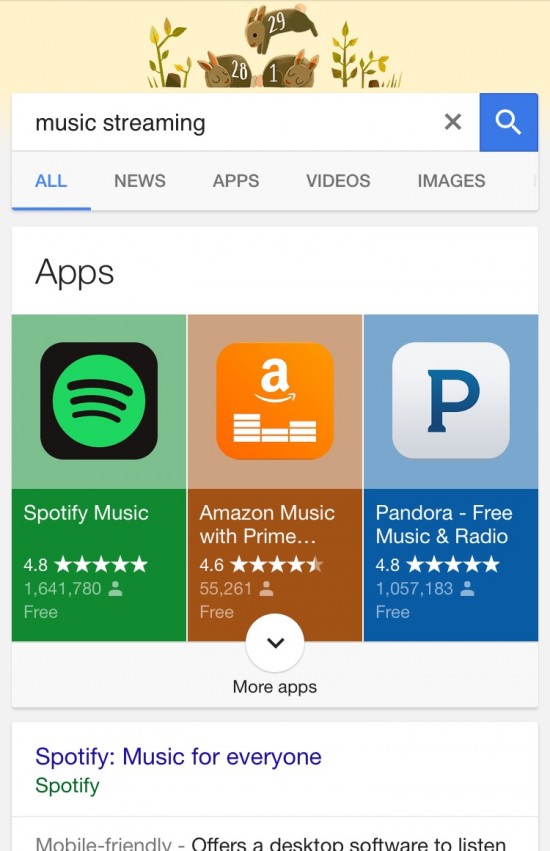 The most exciting news for digital marketers and app creators? Google also offers up download suggestions for apps the user has not yet installed. Provided the content is relevant to the search query, an install link will appear in search results that will take you directly to the Google Play store.

“With the addition of these install links, we are starting to use App Indexing as a ranking signal for all users on Android, regardless of whether they have your app installed or not.”

App indexing can enable you to become an early adopter in this new and growing marketing space. Though its overall effect on search trends have yet to be seen, it’s been suggested that app indexing could have the potential to affect a number of variables moving forward:

How widespread is app indexing?

Despite all of its advantages, app indexing still isn’t catching on as fast as it should.

In the Searchmetrics App Indexing study, we took a look at the top 100 domains in the US by SEO Visibility (Searchmetrics’ flagship KPI for online performance in organic search results). We also looked at the distribution of app indexing in six important branches. The results surprised us. Here’s what we found:

This means that right now is the perfect time for you to get started with app indexing, and gain the upper hand on your competition. For a comprehensive how-to guide to app indexing, simply download the free Searchmetrics App Indexing study.

However, the possible uses of app indexing in 2016 don’t end there. Through app streaming, Google has effectively dissolved the border between apps and the mobile web.

According to TechCrunch, upon tapping a search result link for app-content not currently installed on their device, the user has the option to open the app virtually on Google’s cloud platform. Users can then interact with this “virtual app” as if it were already installed on their smartphone, accessing app content without installation. To be clear, this is not a mobile web version of the app. It is the actual app being run on a virtual machine and streamed to the user’s device.

While still being tested with a few select apps in the US, Google has published an animation to demonstrate app streaming:

This listing of app deep links in mobile search results could offer a serious distribution channel for apps. If an app’s contents are relevant and perfectly optimized to meet user intention, and app indexing is employed, app streaming could result in additional traffic and conversions (though more CTAs to download the app must be integrated).