The US presidential election is nearing the home stretch, with American citizens set to go to the polls on Tuesday, November 3rd. This analysis shows how the election campaign websites of Donald Trump and challenger Joe Biden are positioned and which website is ahead in SEO.

Spoiler alert: after months of being neck-and-neck, Biden is now well ahead of Trump in terms of SEO visibility. While the Biden website is neatly organized by political topic, Trump’s site consists mainly of events, merchandising, and a few short blog posts.

How we did the analysis

First, we analyzed the campaign websites donaldjtrump.com and joebiden.com in the Searchmetrics Research Cloud to answer the following: What level of SEO visibility do the websites achieve? Which site ranks best in what subject areas? What overlap is there between topics? And what domains on the Trump and Biden websites are competing for the top search results on Google? The data for the analysis was collected on October 18, 2020.

Political polling is a complicated animal. Opinion polls are more often wrong than right – we witnessed just how wrong in the 2016 US election when we conducted our Clinton/Trump SEO analysis. Yet, in 2020, Joe Biden has a clear lead over Trump, with all the major polling institutes putting Trump’s Democratic challenger ahead by some distance.

According to the top search results on Google for our general set of millions of keywords used to calculate Searchmetrics SEO visibility, the race is closer than polls suggest.

In the top search results on Google last year, the battle for SEO visibility between Trump and Biden was close, though Trump was slightly ahead most of the time. The Biden website has only gained significant ground since the end of September 2020, surging ahead of the Trump campaign site in terms of visibility. In the meantime, the Democratic challenger has consolidated his lead, while the SEO visibility of Trump’s site has nosedived:

Since then, the Biden domain has steadily increased its visibility in search results on Google, while Trump’s website has plummeted.

#2 Why Trump is losing, and Biden is winning on Google

Trump losing on anti-Biden blog posts: What’s happened since the end of September? Well, the Trump website has slipped down the rankings or been removed from the index altogether on a number of topics. On September 27th, 2020, the Trump site lost roughly 45 percent of its Google visibility for keywords like “vax”, “coalition” and “Washington Post”. In many cases this was due to rankings for blog posts directed against Democratic presidential candidates Biden and Harris or in response to statements made against Trump.

Biden making gains thanks to the Trump Tax Calculator: Conversely, Democratic challenger Joe Biden’s website gained ground, especially around the time the data was collected on October 4th, 2020, SEO visibility rising by 45 percent in a single week. One of the things that gave Biden a boost was the Trump “tax calculator”. Users can enter the amount of tax they paid in 2017 and compare it with how much US President Trump paid in the same year – which, according to the New York Times, was a whopping 750 US dollars. 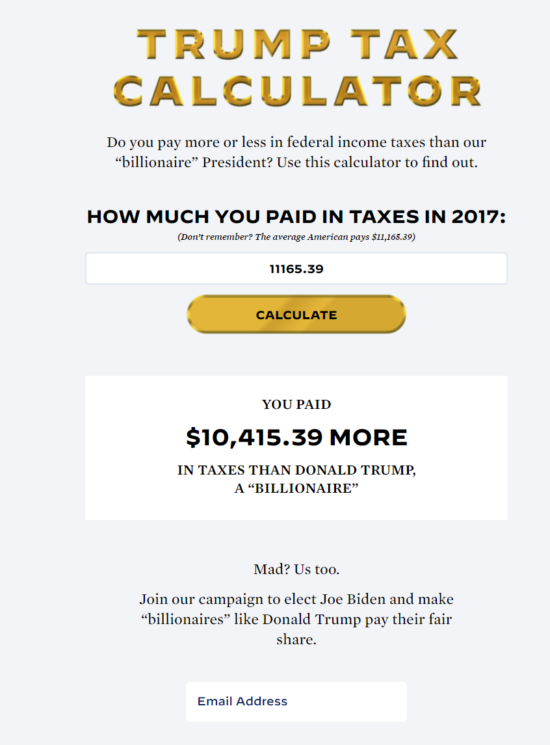 #3 Polarized US election campaign: little overlap between the Trump and Biden websites

Biden and Trump competing for just 2 percent of keywords: The Searchmetrics Research Cloud shows the relevant rankings for a total of roughly 10,000 keywords for the Trump and Biden websites. But only two percent of these keywords are ranked for both the Democratic and Republican presidential websites. All other Google rankings are polarized, showing rankings for either donaldjtrump.com or joebiden.com. 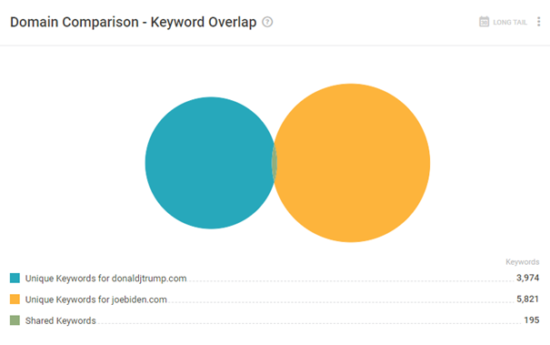 Almost 10,000 keywords – and just under 200 overlaps – the election campaign
websites of Trump and Biden are optimized for very different topics.

The overlaps are primarily in election campaign-related keywords and less in political content. Biden and Trump compete in the organic search results for ranking positions for keywords such as “presidential campaign”, “campaign website”, some campaign slogans and – as the only political content topic – immigration; here Biden has the edge on Google’s ranking. Some selected keywords, for which both Biden and Trump are ranked, can be found in the list below:

Also with it the SEO analysis of the Google rankings of both domains reflects the strong polarization, which is to be found in the US election campaign 2020: There are – according to inquiries – clearly fewer undecided voters. Also perhaps both candidates try to mobilize above all their own supporters with their own topics maximally.

Trump is mainly competing with himself: Donald Trump is competing – and this comes as no surprise – mostly with himself in Google search results. The Trump campaign domain has the highest overlap of shared keywords with the Trump group domain trump.com.

First is non-profit website factba.se, which has set its sights on documenting all of Trump’s speeches and tweets as US President, followed by a number of merchandising stores – from Trump himself and the White House gift shop to a large number of conservative Republican designers that are probably only found in the US. The only political competitor ranking is the website of the Republican Party gop.com, (GOP is an abbreviation for Grand Old Party). 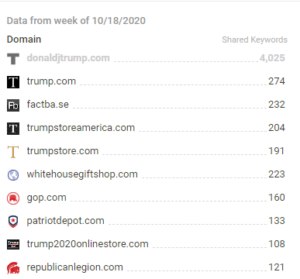 Biden’s online competitors on healthcare and internal party competition: The online competitors for Joe Biden and his campaign domain joebiden.com, are more political, albeit monothematic: Many websites that joebiden.com is competing with for good rankings on Google focus on Obamacare or health insurance for US citizens. There are also three domains in the Top 10 from people who Joe Biden competed against in the primaries for the Democratic presidential nomination: Bernie Sanders, Mike Bloomberg, and Pete Buttigieg. 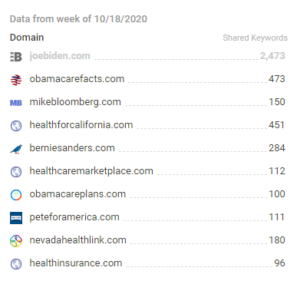 #5 The topics that Trump and Biden rank best in

Both are all about donations, merchandising, and mobilizing support: Anyone who visits the homepages of either candidate will not be inundated with political content. In fact, both websites focus on appealing for donations and mobilizing (potential) supporters. Nevertheless, what we want to know is what’s really relevant for Google’s rankings. So let’s take a look at the individual directories of Trump’s campaign domains: What directory is most relevant for organic SEO performance?

Very little in the way of political content on Trump website: With Trump, the website’s lack of thematic structure is striking; the domain achieves most visibility from its media directory, which contains announcements, statements, and responses in the form of blog posts. Then comes the visibility from its merchandising rankings for URLs in the products directory. Under events, you’ll find a calendar of events, while noticias is aimed at a Spanish audience, and landing contains specific landing pages. 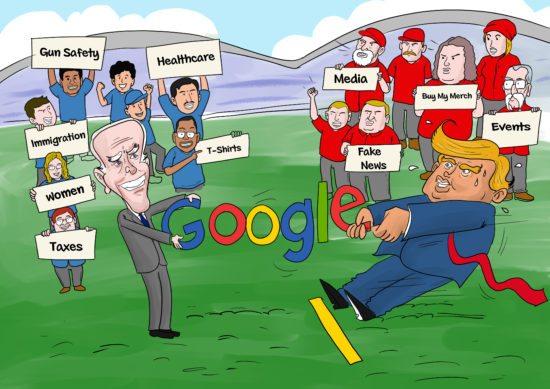 Biden’s website reflects political issues: While political content and the dissemination of such content appears to play more of a subordinate role on Trump’s campaign domain, the domain directories of Democratic challenger Joe Biden are neatly organized by subject areas, achieving the corresponding degree of visibility. The subjects that are most relevant for Google rankings for Biden’s site/domain are immigration, gun laws, healthcare, women’s rights and many other issues of the day. The tax calculator we mentioned earlier can also be found here:

#6 Paid search: What landing pages are Trump and Biden promoting?

Advertising, especially for the store: One thing both websites are clearly looking to achieve is revenue from Google Ads from links to their respective stores, where their supporters can stock up on countless merchandising products, if they wish. The range of merchandise being offered includes clothing, stickers and even dog leashes. The Trump store has Trump coloring books, wooden trains, protective clothing and whiskey glasses, while the Biden store offers a range of face masks and Biden/Harris add-ons for the Nintendo Switch game Animal Crossing. 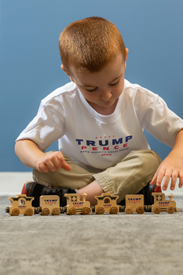 The wooden train from the Trump store

#7 Conclusion: Trump vs. Biden – who comes out top in the SEO check?

There are only a few days left until the presidential election on November 3rd. So let’s check out the websites of both candidates and see how they fare in terms of SEO visibility and Google rankings: