When Google introduced Google for Jobs in late June, market watchers wondered whether yet another one of the company’s initiatives would have a major impact on the organic jobs-listing market and the likes of monster.com and glassdoor.com. In this week’s Unwrapping the Secrets of SEO, I’ll take a deeper look at Google for Jobs and what it means for marketers in this segment.

What is Google for Jobs?

Essentially, almost any keyword related to a specific job type or a specific job type and location will trigger a Google for Jobs integration. Help wanted listings are culled from traditional jobs websites and Facebook with the aim of giving searchers a more holistic view of positions in their area – without the duplication you’d see by trolling multiple sites.

Job hunters will see when a job was posted, be able to see whether the role is full or part time, and will be able to tailor the listings across experience and wage levels by industry, category and location.

For now, the initiative applies only to English-language queries in the US, which is a typical pattern that allows Google to determine interest, develop other language versions and work out kinks. If successful, Google will more than likely roll out Google for Jobs to other markets.

Here’s an example of the simplest form of search: 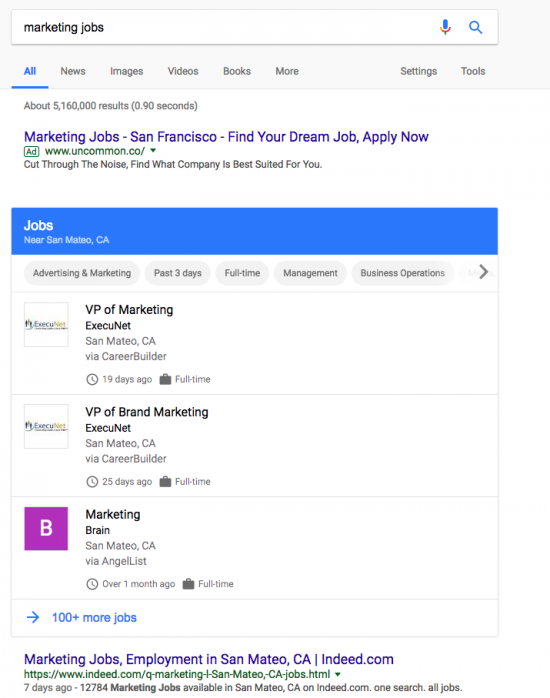 And here’s an example of a Job Title & Location search: 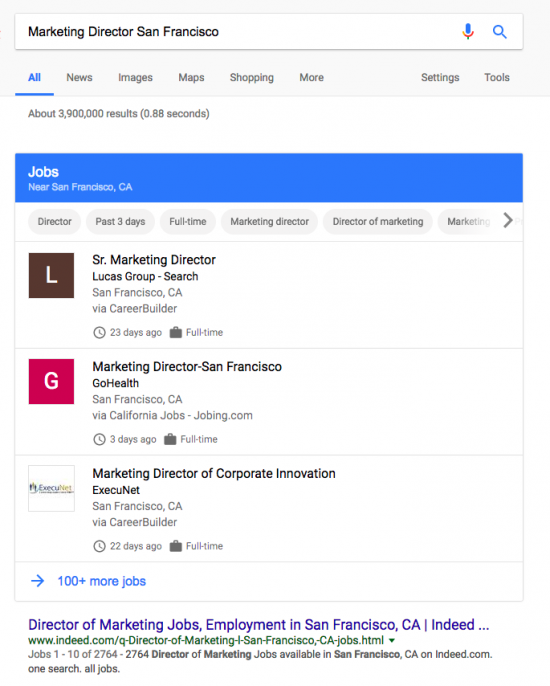 In international markets for now, it looks like searches point mainly to US-related queries, either returning a Direct Answer or standard result: 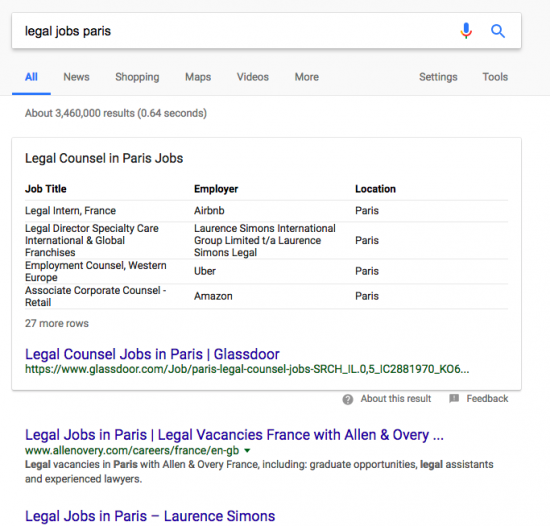 Is Google for Jobs Easier?

Does Google for Jobs improve the user experience? That’s typically the major criteria Google execs give for announcing a new initiative. But in its early days, I’m not so sure it does.

Google in its announcement took pains to note it’s working with LinkedIn, Monster, WayUp, DirectEmployers and others to aggregate postings from their sites “as soon as they’re posted” – and that it had created open documentation to allow even small employers to make their job opening publishable.

In the short term, it’s clear that much of what you see is aggregation from other job search aggregation sites. That means the user must take an extra step to actually apply for a position. I outline some of the steps below:

Looking for a Job: 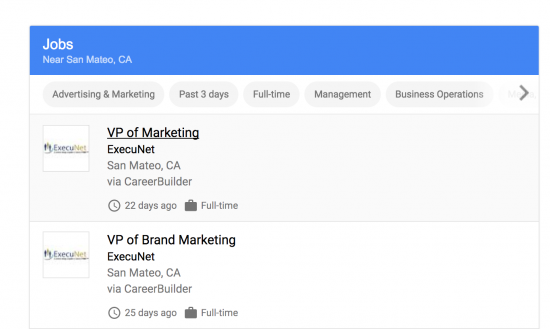 Returning back to the CareerBuilder site to see more on the listing:

Of course, the benefits of seeing multiple job listings on aggregator site might outweigh the downsides of having to go through a few additional extra steps when applying. But if you’re looking for specific positions with specific companies, it’s probably better to stick to searching that company’s jobs page directly.

Right now, all things aren’t equal on Google for Jobs when it comes to showcasing information from all the jobs sites. In my tests, Google for Jobs showed a clear preference for CareerBuilder content: 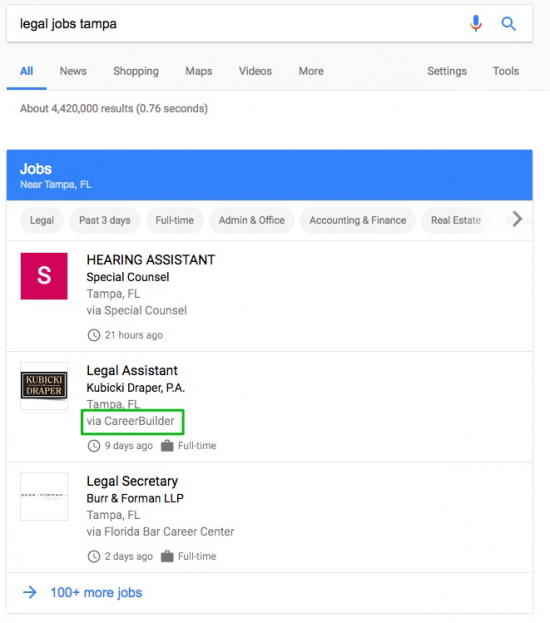 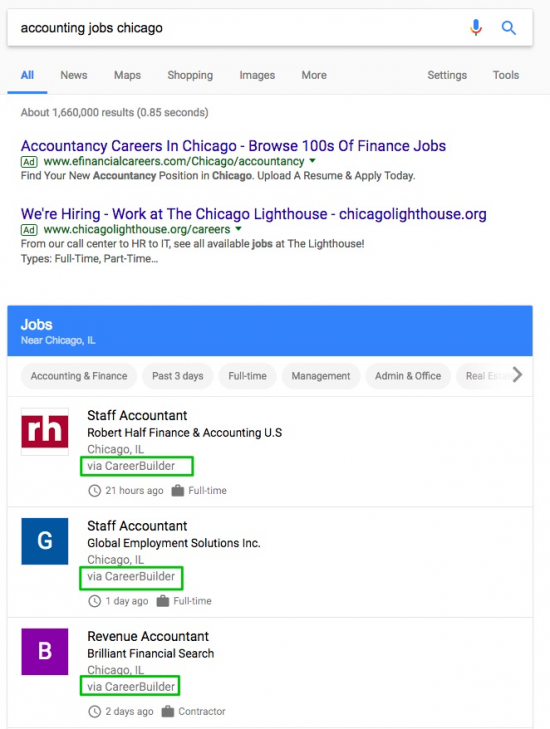 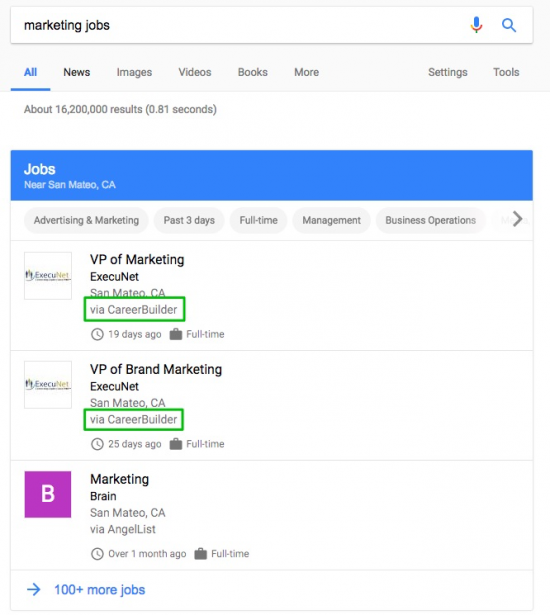 While this will have a direct negative impact on CareerBuilder’s SERP, it gains direct benefits from referral traffic to the site.

Then, too, there’s a direct impact on visibility and, most likely, click-through rates for Google for Jobs partners. Here’s a sampling of the impact on key job aggregator sites:

Google for Jobs offers users a simplified experience for finding jobs large and small in specific fields and areas, but it will cannibalize market share for existing brands that do much of the same thing. While the end-user ultimately will benefit as small and midsize employees adopt Google for Jobs, career sites like LinkedIn, CareerBuilder and Monster will need to reevaluate their decision to play ball with Google, or come up with different ways to get users directly to their offerings.