Most people involved in the tech universe know how important SEO is for peddling their products on the internet. For companies whose products are traditional and tangible, however, the powers that be may not understand why good SEO hygiene is needed to get products such as cereal or window cleaner in front of customers on the internet to stay competitive. Getting clients and C-levels to understand why good SEO is imperative and it is one of the major roadblocks on your path to success as an SEO. Here in this installment of Unwrapping the Secrets of SEO we’ll look at ways to clarify the value SEO to your clients.

1. Convincing the C-Suite That SEO is Important

Let’s first build on the example of C-Levels, who are dubious about how strong SEO can help generate interest in a product. When it comes to product, money speaks louder than words. While you may not have fistfuls of cash to show them, you can show execs that good SEO is a staple currency on the internet. The simple method: type a search term into a search engine query box and let Google show them what it means. Explaining that thousands of results are filtered by Google to represent a page of search results  to determine which products is featured prominently might be enough information to scare any exec into dumping more money into their SEO budget.

However, there are more concrete ways of demonstrating why every company needs a good SEO strategy: numbers. According to a 2017 study from Internet Marketing Ninjas, sites that landed on the first results page accounted for 82% of all queries, 96.8% of all Impressions and 99.3% of all Clicks. This is the type of information you should be hammering into the minds of your c-levels and once you have measurable results, you can deliver custom numbers to your execs. Once you start tracking the results, you can hand over the ROI.

While it’s tough for SEO to get a piece of the budget pie, it may only be a sliver next to the slice on the search engine marketing plate. It’s challenging to make a case for SEO when it takes time to see its measurable results, whereas the results for SEM are almost instantaneous. It’s fairly simple (at least as simple as a bidding process that Google can make it). For SEM, your ad can come up on the first page of search results and, if users click on it, you know you’ve cleared the first hurdle to success with the tactic.

It’s a short term fix, while SEO is a long-term solution for driving traffic. Think of SEM as the sprint and SEO as the marathon.  Both use keyword research to get to the finish line. They both work, but you have to know in what instances you need SEM and when SEO will deliver. There’s a delicate balance between the two for either one to succeed without cannibalizing each other’s efforts.

Take the search term “earthquake kits” as an example. At the top of the results page you see several paid links — among them, Quakekare.com. 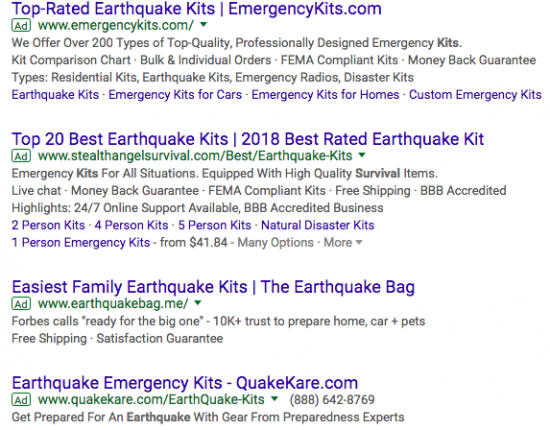 Below those results are the organic returns – where QuakeKare.com shows up again. Both are on the first page of results, so Quake Kare is, it could be argued, competing with itself. If someone clicks on the ad at the top of the page, Quake Kare will have to pay for it, but if they click on the link a little further down the page, Quake Kare will get the same result for free. To quote Alanis Morissette, it’s like a free ride when you’re already there. For smaller companies with comparable budgets, when this happens, both SEM and SEOs may want to rethink their strategies in regards to keyword research by scaling back on SEM for the keywords they already rank for organically and using the paid ads for the keywords they don’t but want to rank for. 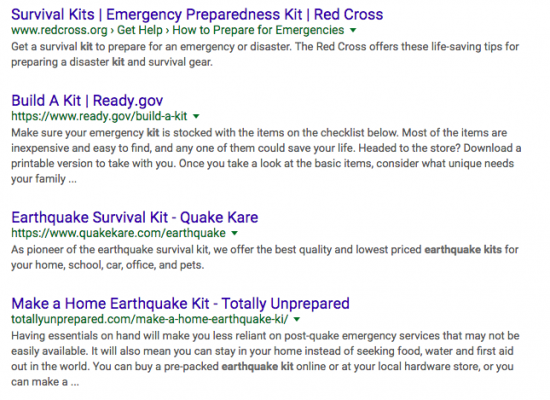 Showing up twice on the first results page is not necessarily a bad thing – Amazon does it frequently. For companies with big budgets, it might make sense to do paid ads for keywords even though they already rank organically. According to Google, SEM won’t improve organic rankings, but it does increase the visibility of a brand when it shows up twice on one page. Some users ignore paid ads altogether and go straight to the organic links, while others take it all in. Good persona research would help to strike the right balance between SEM and SEO to make both successful by figuring out what they’re searching for, why and how.

A major unspoken roadblock for SEOs is the amount of technical debt they have to wade through. It’s best to do a technical health check on the site before you take on the project so you know what you’re heading into, as well as being able to communicate to your client the kind of work that is involved and how much time it may take. Technical debt starts to accumulate when shortcuts are used to create a site and later have to be repaired, remodeled and restored in order for other projects to be set in motion. It can slow down all of your efforts.

Once you get the technical assessed, you should set your priorities with the radical changes that Google will notice first as it crawls the site.  This is especially important if you’re working with large sites that contain a lot of pages. In worst case scenarios, it could take months to dig out of. Before you take on a project, make sure you know your accessibility to the development team so you can give an accurate assessment and set expectations and structure your strategies.

It’s nearly impossible for any site to avoid technical debt, so every SEO consultant will encounter it. The key is to curb it so that it doesn’t get out of control and make your SEO project more difficult than it has to be.

Some SEO consultants are lucky/unlucky enough to encounter a Google penalty on a client website. It’s unlucky in that you have to explain it to the client and why it’s important to fix; lucky in that it’s the kind of challenge that SEOs got into the business for in the first place.

First, you should determine whether the penalty was from poor or black hat SEO tactics or if it was the result of an algorithmic change and communicating what that means to your client.

-Algorithmic Change You can identify a penalty from an algorithmic change fairly easily with the Visibility graph from the Searchmetrics Suite. From the image below, you can see lillypulitzer.com was penalized a few times over the last couple years when Google rolled out algorithm changes:

This is the kind of chart that would be good to show a client. It illustrates how lillypulitzer.com suffered a visibility loss during the Phantom IV in 2016; the chart also shows an interstitial penalty (an update to target pages that made aggressive use of interstitials and pop-ups because of their negative impact on user-friendliness) in early 2017 as well as Phantom V and Fred updates. In each scenario, it looks like Lilly Pulitzer quickly made adjustments to get back in the good graces of Google, however, it may not be that easy to correct egregious errors, but having something to demonstrate the issues to a client so they understand the value of your work.

-Flagged Site If a site’s been flagged, it may be a more difficult penalty to recover from — and Google is not afraid to make an example of it which is something your clients should understand as you’re correcting it so they know what was done and why it should be avoided. Case in point: in 2006, Google removed BMW from the Google index entirely for using doorway pages  (pages created specifically for ranking for particular search terms) stuffed with keywords on its German website. In this type of case, it’s good to show your client that Google lets you know through its Webmaster Tools what the site was penalized for. If the penalty was from an outside source (the site was hacked or it was a target of spam) it’s good to show the client how it’s corrected and request a review from Google.

No one said being an SEO consultant would be easy, but you can make your simple as long as you educate your client well and arm yourself with the right tools. If you want to know more about how Searchmetrics can help you handle your SEO projects, sign up to check out a demo of the Searchmetrics Suite.