President Trump’s first 100 days in office is an important benchmark. The American electorate wants to see what any president has (or hasn’t) done, and whether that person has held true to the promises made on the campaign trail. In this spirit, I’m revisiting a look at the WhiteHouse.gov site’s performance to see how it is performing more than 100 days after the Obamas left the White House. 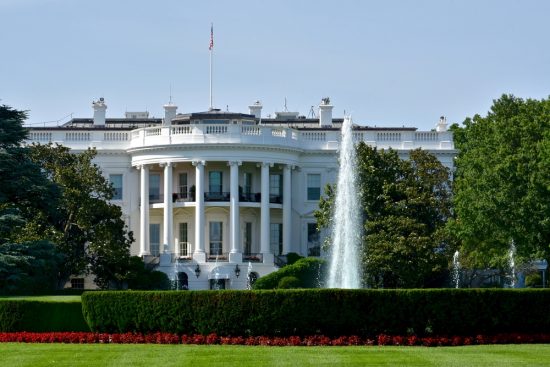 In a previous post, I analyzed the effects of the repeal and replace of the Obama administration’s WhiteHouse.gov site shortly after President Trump’s inauguration. The results were not good. I specifically addressed the pitfalls his team fell into and outlined the fundamentals of site migrations that can mitigate (or even fix) the impact of these oversights. So, in addition to checking on the first 100 days of performance, I will also be following up on issues that I identified 30 days after the inauguration.

Unfortunately, many of the issues I highlighted are still unresolved; the site is continuing to hemorrhage the SEO Visibility it had prior to Trump’s presidency. So far, only low-hanging fruit issues have been addressed, like the Executive Branch page that still referred to Barack Obama and Joe Biden as President and Vice President.

SEO Visibility is down 40% since Trump became President. During Obama’s last week in office, WhiteHouse.gov had an SEO Visibility score of 202,731. After 100 days, this number plummeted to 121,874 and does not show any significant signs of recovering to the previous level of performance.

Visibility is a proprietary metric created by Searchmetrics for measuring site performance. It’s based on the number of keywords for which a site ranks, their position in the search results and their search volumes.

Why The Basics Matter

Poor execution of redirects from the previous site to the current site is the most significant factor to the White House’s sudden drop in SEO Visibility. Properly implementing a redirect strategy that mapped pages from the legacy site to the new site would’ve prevented such a massive decline in SEO performance.

Proper redirection ensures that users accessing legacy pages are redirected to relevant pages. Redirection also passes the online authority that these pages have accrued to landing pages on the new site. Without redirects, users will have a bad experience because they won’t find suitable content on the new site. The authority of the previous pages will also be lost – not passed to the new site, causing its performance to drop.

A site’s authority is based on the topics and keywords for which it ranks. Properly redirecting from these pages can preserve this authority. Redirects aren’t enough, though. These redirects must be targeted to pages on the new site that accurately cover the topics of the previous site. A comprehensive content strategy is necessary to ensure the same content and topics are on the new site as well.

In addition to inventorying the pages of the previous site, webmasters also should conduct an inventory of content. Proper content curation will ensure that all topics are surfaced. This insight can be used to reproduce this content on the new site. 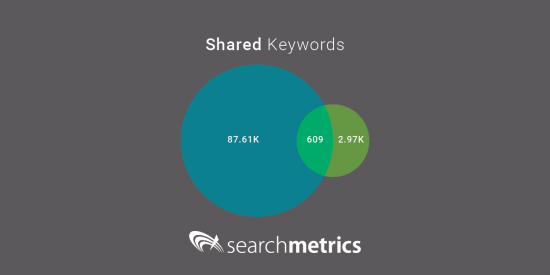 To be fair, some aren’t relevant to the Trump era, including “state of the union 2016,” and “cesar chavez day 2012.” However, some of these terms are still relevant and have significant search volumes. 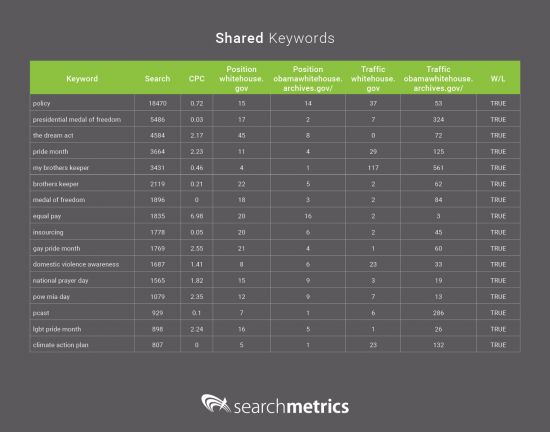 Other topics from the previous administration may have been important to the site’s audience, and a point-of-view about them on the new site could be beneficial for both users and search value. The administration changed, but the audience, the American people, did not. Issues and topics that were important to the people prior to Trump’s inauguration are probably still important.

This compares to content written in the first 100 days in Obama’s first term, when 83 articles were published:

Analyzing the blog directory reveals a similar, downward trend in SEO Visibility to the entire site. The slope is less profound due to the time required for Google to discover that this deeper content from Obama’s White House no longer exists on the Trump’s site.

Prior to Trump’s inauguration, the SEO Visibility of the blog was at 9,332. SEO Visibility bottomed out at 36 on March 12th. Since then, however, the content of the new site’s blog has started to earn some rankings. As of April 30th, the SEO Visibility for the White House Blog is at 521. While this is an impressive growth over six weeks, it still pales in comparison to the amount of SEO Visibility prior to the relaunch. 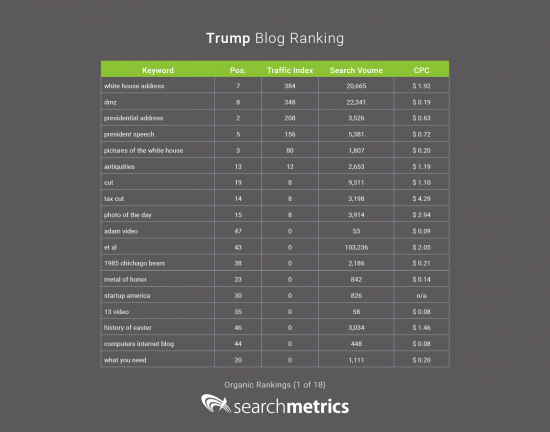 Obama’s blog still maintains rankings for 250 keywords. These terms include policies from Obama’s time in office, like the Dream Act, and national holidays like the Fourth of July and Hanukah. These are all relevant terms that can be included in the blog on the new site. 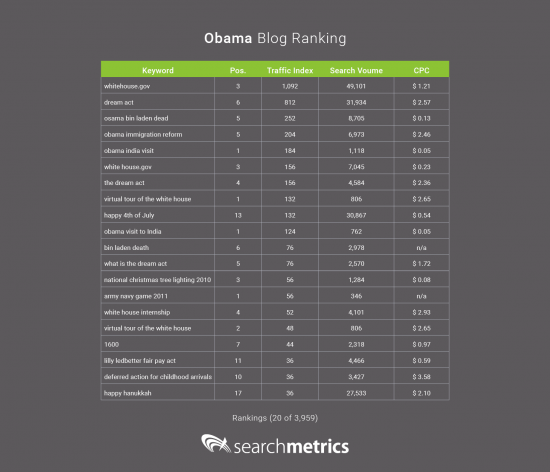 Much has been said about President Trump’s active use of Twitter to take his message directly to his followers. Rather than jump into that debate, I’d note the White House official website is and should be an important channel for viewing communication and policy positions of the executive branch. It’s still a great archival tool for historians and a major information source for people around the world.

On a broader front, I would reiterate what I said in the previous post. Failure to adequately plan your migration will result in a significant drop in SEO Visibility, which leads to less traffic, fewer conversions and potential tarnishing of your brand’s online reputation.

As mentioned in my previous post, the first step of migrating or relaunching a site is conduct a thorough inventory of the existing site. Unfortunately, this didn’t happen for WhiteHouse.gov. However, the Trump administration does have the luxury of access to a full archive of the previous site.

Then, identify the topics for which only Obama’s site ranks. Build corresponding content on the new site. If the content is not part of Trump’s agenda, a reasonable course of action would be to write a point-of-view on the previous subject or how Trump is handling it differently. For example, Obama’s site had a landing page about the LGBT community. Trump’s version of the site does not have a dedicated, LGBT landing page. However, Trump did decide to keep Obama’s advocate, Randy Berry, on his staff, who continues to address these issues. Building a page that communicates this, along with any of Berry’s current initiatives, would be an ideal solution.

As previously mentioned, some of the topics from the previous site are bound to specific dates, such as holidays, and may not be immediately relevant. Topics pertaining to these events should be incorporated into a content calendar for release on future dates.

Finally, after creating new content to support the topics of the previous site, the administration should begin redirecting the collapsed URLs from the previous site to their new counterparts. Assuming that backlinks still exist to the legacy URLs, some authority will still be passed to the pages of the new site, and the new site overall.

100% of the SEO Visibility from the previous White House site may not be passed to the new site, but a considerable amount could be, if these steps are taken. If you’re planning to migrate or relaunch your site in the future, hopefully, you can learn from this example and prevent this fallout from occurring on your site.

What are the key steps webmasters should take? There are a few that could be applied to any website: