In 2015 we, in partnership with Search Engine Journal, are bringing you the SEJ Summit! A conference series that will take place in six cities across the United States and one in the United Kingdom in London. The 2015 SEJ Summit which is hosted by us, will focus on content marketing, enterprise SEO, social media and more. It’s the perfect one-day conference for any enterprise digital marketing professional looking for three takeaways that are actionable, impactful and memorable! 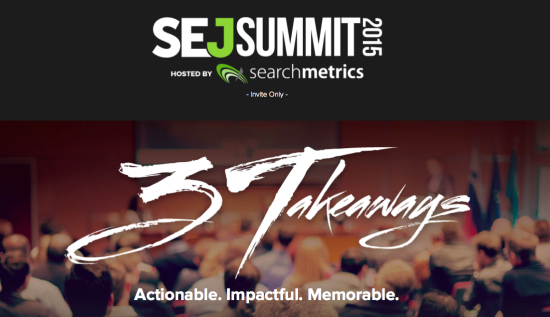 Thanks to the overwhelmingly positive feedback from our last standing-room only event with SEJ, we are excited to announce we are expanding the conference!

Similar to the SEJ x Searchmetrics conference, which focused on SEO, Content Marketing and Analytics: The Three Pillars for Online Marketing Success in 2014, the SEJ Summit will feature sessions on Content Marketing, Enterprise SEO, Inbound Marketing and Social Media. The conference will also dive into other areas of marketing like team management, influencing and negotiation.

What sets these conferences apart, is together we have created the perfect antidote for “conference TMI”. By focusing on 3 main points from each speaker that are actionable, impactful and memorable, the SEJ Summit is truly perfect for any enterprise digital marketer.

This seven city conference series, which is invite only (but ticket requests can be made here) will take place in the following cities. The exact dates and venues will be announced soon:

PS – Interested in speaking at one of the upcoming SEJ Summits? Email Kelsey Jones (Kelsey@searchenginejournal.com) with the Subject line: SEJ Summit Speaker Inquiry