As part of the ever evolving world of social media, we recently started including Pinterest into the data sets of social analytics here at Searchmetrics. It’s no secret that they’ve shot up over the last year to be one of the top networks along side of heavyweights such as Facebook, Twitter and to a lesser extent, Google Plus and LinkedIn.

But what does it mean? How does it play into things? Over the years the search marketing commnity has often taken the view that search elements such as Google Image search aren’t all that important as it’s not a core converting factor. Sure, you can get on page one with an image universal, but it didn’t generally warrant a whole lot of targeting in the average marketing campaign. Pinterest is a game changer.

I can haz revenues?

Yes, you heard me right, REVENUES. For those using Pinterest effectively they are not only driving referrals to their sites, but actually creating sales from it. In fact, I know of situations where Pinterest is indeed creating more revenues than even Google.

“One of the biggest differences between Pinterest and other sharing sites is the large number of people that will follow you if they like your pins.” wrote Steve Gerenscer of Steam Driven Media, adding that “This creates a potentially huge audience for things that you find interesting. “ In talking to Steve they have indeed seen some great results (revenues) by investing time into the social platform.

You shouldn’t be spamming Pinterest, but if you engage properly, there are indeed sales to be made.

Another interesting phenomenon is the fact that people are using Pinterest not only as a way to share images, but also as a social bookmarking tool. This means that content driven websites shouldn’t be ignoring it either. We have seen non-descript images shared by Pinners into boards with names like “SEO Reading” “Google News” and other related naming conventions.

This implies that they are indeed just sharing the articles or saving them for later. Obviously if you work harder at creating compelling imagery, it will increase the liklihood of your informational content being shared and gaining new referrals from the social graph. 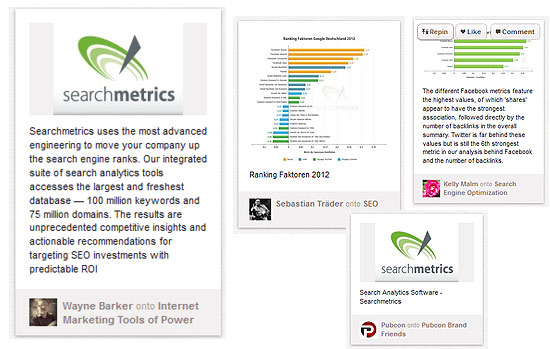 Big Media; who’s got the chops?

For those familiar with Searchmetrics, you’d know we’ve a long standing reputation for comparing Panda/Penguin winners and losers as well as for the ‘freshness’ update and also playing with social data ranking correlations.

This time around we thought it might be interesting to take some of the more well known new media outlets and get a sense of how they’re making out on Pinterest. Here’s what we came up with (data from Searchmetrics Suite Pinterest analytics);

Now, as far as I am concerned, diversity is king. In looking at the Chicago Sun Times we see that a full 95% of the pins are to a single page, (and it isn’t the home page). The same issue occurs with The Wall Street Journal at 66%. At least with the WSJ I can somewhat understand it given the nature of the demographic reading the publication.

We compare that to the NYT, which has a measly 3% for the most pinned page, and you can see that they’re indeed doing a great job of getting a TON of content in front of the pinners. And what about their actual accounts on the site? We looked at that too;

Interestingly it seems many of the accounts we looked at really haven’t grasped Pinterest yet. Surely they have social media marketers on staff no? Are they living under a rock? Again, this isn’t always about the images. It is also being used to share and bookmark articles. 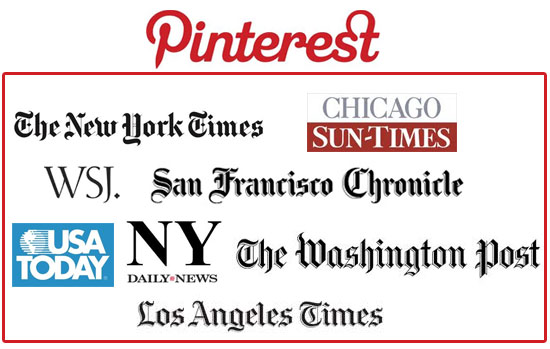 Competitive Analysis for the win

And this all plays back to my last (series) posts on competitive analysis among NFL teams. By doing some competitive analysis in your own market you can start to establish who is using the channel well and who isn’t. Start to dig in deeper and see if they have pin buttons on their site. The locations of them. How active they are engaging users on Pinterest and more.

Again, this is a great channel on many levels, not just to get people looking at pretty pictures. You can drive traffic. Drive page views and indeed, drive sales.

If you’ve ignored Pinterest because you thought it was just about sharing images, you’ve most likely missed the boat. This is indeed about far more including traffic to informational offerings and sales as well. With Google’s ongoing penchant for changing things up (Panda, Penguin, Exact Match), can you truly ignore any quality traffic source NOT named Google? Methinks not.

NOTE: something I also realized just now, is that Pinterest treats a sub-domain as being a different site. Be sure to look at that when doing your own analysis.