In the words of fashion icon Heidi Klum, “One day you’re in, the next day you’re out.”

These words were never truer for online marketers in 2016. Faced with another year of Google updates and marked changes in strategies for succeeding online, our third-annual Searchmetrics Winners and Losers report reveals that publishers with specific editorial direction and household-name websites like Wikipedia and Facebook were the biggest gainers of the year, while other informational sites showed marked declines in desktop search. 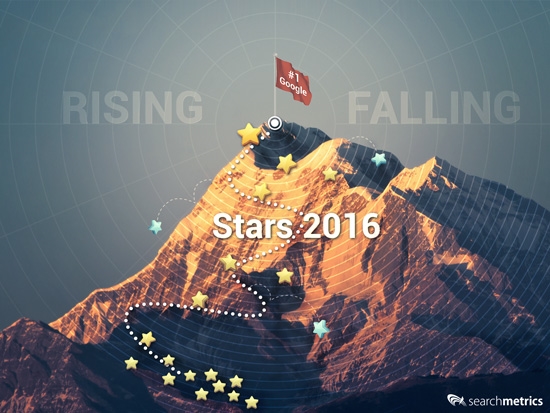 As with everything surrounding search and Google, the goal posts are constantly moving. Last year was no different. In 2016, we saw:

These led to large changes in yearly winning and losing trends for various domains. Some publishers, who were among the big winners of 2015, struck gold again in 2016 in terms of visibility. While Brexit, the U.S. presidential election cycle and other world events may have played a large role in their rise, Google’s efforts to ensure viewers receive what it deems more relevant information, more quickly is just as notable. On the other hand, Google Answer Boxes and the rise of mobile search likely contributed heavily to declining desktop visibility for encyclopedia pages, dictionary sites, translation pages and lyrics domains.

HOW WE ANALYZE THE DATA

This analysis is based on the SEO Visibility of each website, which Searchmetrics has developed as an elementary indicator for measuring a webpage’s performance in organic search. For our evaluation, we have analyzed how the SEO Visibility of all domains that are included in our Index over the course of the year.

Thereafter, we checked those domains that displayed the largest absolute change in SEO Visibility. This change again represents the domain’s trend over the entire course of the year. The lists of winners and losers is sorted by absolute change. In order to provide an idea of the dimension of this change – and to aid comparability – we have also indicated the percentage changes. We removed adult and unofficial streaming websites from both lists, as these sometimes appear among the top winners and losers, but are irrelevant for analysis because their status is not sustainable. Migrated domains have also been excluded.

IF YOU PIN IT, THEY WILL COME

Thanks to relatively steady economies and a host of global issues, including terrorism, immigration, elections and strong economic recoveries, many publishers and shopping sites experienced big gains in visibility last year.

Among the biggest winners? Pinterest.com, with its 150 million global users. The startup recently announced it is using deep learning, a precursor to artificial intelligence, to generate more relevant results that evolve based on user behavior. Like Apple, Google (and even Searchmetrics), Pinterest’s application of deep-learning techniques is a key step in helping software understand the ultimate intent of a user, thereby generating more loyalty and stickiness online. 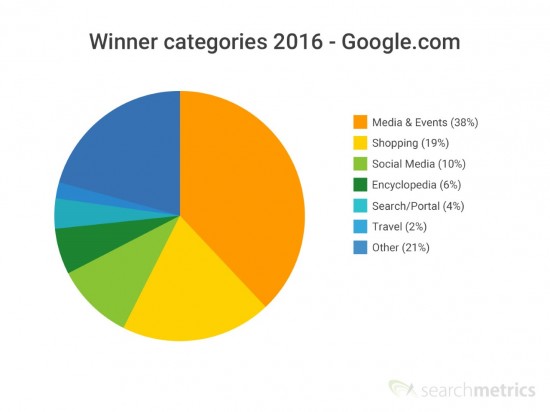 The following is an overview of those pages that saw big declines in their organic Visibility in 2016. This does not necessarily mean that these pages have experienced losses in traffic or turnover; it is simply an indicator of the domain’s presence in non-paid search results of google.com.

The most commonly-found category amongst the top losers of 2016 is publisher websites, many of whom were general news domains. Other categories with several representatives in the year’s losers are shopping and encyclopedias.

The Risks and Rewards of Google Updates

The following graph shows the weekly development of winners and losers throughout 2016. You can see the impact on Visibility of the Google Updates that were rolled out in 2016. 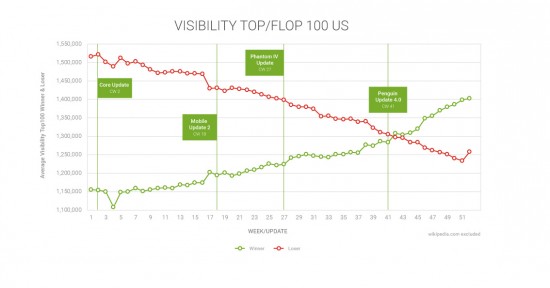 Whilst publishers as a result of  the Newswave update and other change to the Google algorithm were some of the clear winners of 2015, this trend didn’t continue in 2016. Instead, numerous publishers experienced a drop in their SEO Visibility. One example is theatlantic.com. One of the reasons for its drop is probably the algorithm change concerning in-depth arcticles.

A lot of the top losers of 2016 are in Publishing. Amongst the declining websites, they ran the gamut, from news and tech publishers to TV providers. AThe winners, on the other hand, tended to focus on special interest content – dealing with TV, health or technology and games. Another trend ist the algorithm change for video publishers. While Google’s own YouTube.com is continously growing, other video platforms such as dailymotion.com are losing Visibility as a result of this change.

Dictionaries, translation sites and lyrics domains were some of the losers of 2016. The Visibility declines were caused by the Phantom IV update and the increased implementation of direct answers, a Google in a widget above the organic search results.  The following is the Visibility trend for thefreedictionary.com.

There is a ray of hope: Whilst many lyrics pages lost Visibility, various music portals saw significant improvements. Spotify, Deezer and the like were able to celebrate considerable rises in their organic Visibility in 2016. Amazon Music, Apple Music and others increasingly are including lyrics in products to their subscribers.

Large portals like Amazon, Instagram and others continue to be big winners by offering new and differentiated content – key themes for Google and other search engines as they travel down the road toward artificial intelligence. Sites that get quicker at loading new, engaging content that seeks to understand the user’s search intent are poised for even greater gains in 2017.