It hasn’t been a good week for the publishing industry. More than two dozen of some of the biggest brands in media, including Apple, The New York Times, The Washington Post and Time Inc., experienced steep plunges in online visibility, caused by what we suspect are sweeping changes Google is making to branded search results. 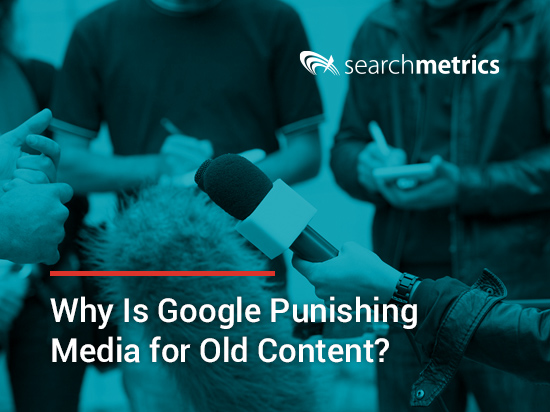 Searchmetrics mobile ranking data, compiled April 10 and compared with a week earlier, showed unexpectedly sharp dropoffs in SEO visibility for mostly media branded results. Uninspired use in online articles of major brand names such as Netflix, Apple and Amazon, commonly called click bait in the industry because of their heavy consumer interest, appeared to be one of Google’s targets.

By comparison, Apple’s visibility meltdown was more modest, at 63 percent. Apple’s decline was almost entirely attributed to declining visibility for apps listed in its iTunes storefront.

iTunes apps in which customers might easily find answers elsewhere appeared to take the biggest hit. A Google search for musician Tove Lo, for instance, reveals her Wikipedia, Facebook, Twitter, YouTube and Instagram pages, as well as her own website. Her iTunes listing was banished to page 2, with zero visibility in our rankings.

Meanwhile, Google apparently isn’t afraid to punish its own children; the Gmail messaging system saw mobile visibility declines of 59 percent after two URLs attached to the name were frowned upon. 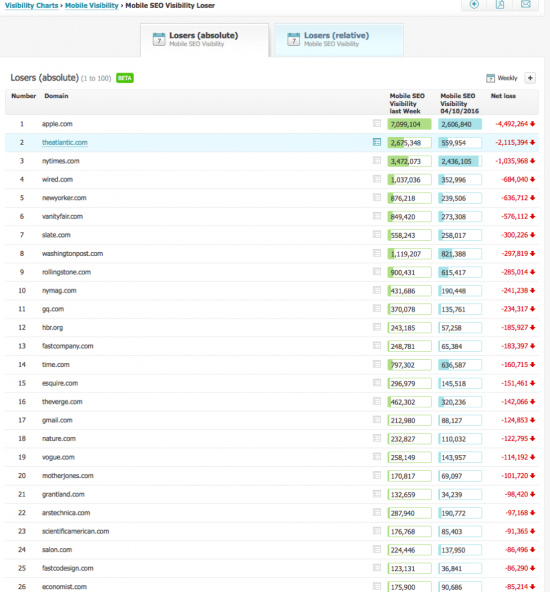 Amazon, Netflix, Apple, “ Star Wars,” Kim Kardashian and Bill Cosby were some of the common keywords on Google’s media hit list. Older articles with those brands featured in Wired, Time and other publications experienced the biggest drops in visibility, suggesting Google is starting to penalize brand overuse if content isn’t refreshed frequently – even if the older content contains high-value keywords.

For those looking at Google’s upcoming update to its mobile-friendly algorithm, it doesn’t appear to be the culprit. The search king last month said the update, affectionately termed Mobilegeddon 2 by the industry, “increases the effect of the (mobile-friendly) ranking signal” and will begin happening at some point in May. Google assured the industry that sites that had already passed last year’s mobile-friendly test with flying colors would be little-affected.

Our data also points to something larger than mobile mischief. While mobile SEO visibility fell sharply for many of the aforementioned companies, desktop rankings initially were unaffected.

That changed on April 13. Shared desktop and mobile keywords began plunging in much the same fashion, suggesting Google first rolled out this update to mobile, and then followed up days later on desktop, which leads to a drop in overall SEO visibility of the respective domains.

What can Media Do to Prevent Another Meltdown?

The answer may lie in Google’s moves to get site developers to focus on understanding user intent in search queries and delivering new and differentiated content to both mobile and desktop.

In January, we saw similar declines in visibility for mostly media sites, specifically for brand terms and URLs. Back then, The Atlantic also was a big loser in overall visibility. Interestingly, though some SEO followers noted the changes using our data, none of the affected parties made any outcry about a noticeable drop in overall site traffic (versus visibility). Good content may be replacing bad at a decent clip, mitigating heavy revenue loss. And content that matches user intent is still being rewarded.

For its part, Google has been mum about the reasons for the media penalties. Some in the industry speculated it may be beginning to punish sites that republish content with only minor tweaks to wording. In the case of The Atlantic, many of the red-flagged pieces this time around indeed were older content. On the other hand, those same URLs passed Google’s Mobile-Friendly URL checking tool. By contrast, the Gmail URLs had no content but flunked mobile-friendly tests. 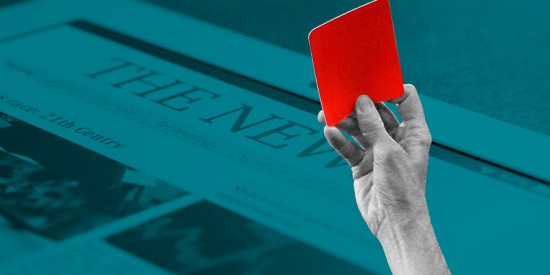 Publishers and other site owners should see these penalties as early warning signs about an evolution in the way in which Google sees the search world. With branded search results, a company’s Twitter, YouTube or Facebook page may rank higher than the now visibility-challenged URLs Google appears to be outlawing.  And as Google pushes changes such as app indexing, deep linking and app streaming, such fluctuations may become more common until developers and the SEO world catch up.

We’re continuing to examine the data, and will update you if we can point to more definitive answers.