The 2016 Race for the White House is nearing an end. From the first caucuses in Iowa in February, the Democratic and Republican parties each whittled down their lists of candidates, with each settling on their chosen nominee. On November 8, either Hillary Rodham Clinton or Donald John Trump will be elected 45th President of the United States of America. 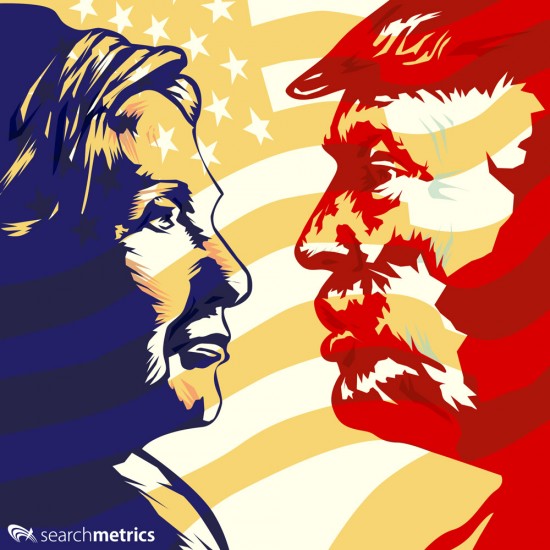 As usual, the 2016 presidential campaign has been full of polls, scandals, soundbites, accusations, endorsements, more polls and more scandals. A few months ago, our colleague Paul Bongers began analysing the candidates’ campaign websites. Here we show you how the final nominees have been performing in terms of content and SEO – how do the Google rankings reflect the overall state of play? 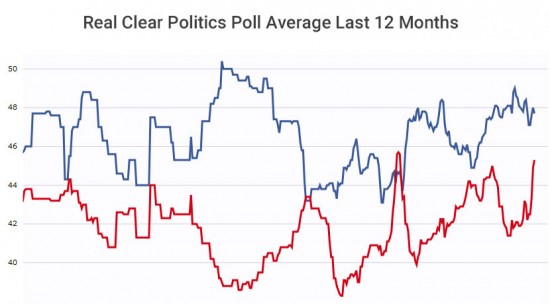 Regular readers of this blog will realize that the graph above does not show Searchmetrics’ usual SEO Visibility Index, just as avid followers of the US Election will recognize the Real Clear Politics national average poll tracker. The real graph showing how the SEO Visibility scores for hillaryclinton.com and donaldjtrump.com have developed over the past 12 months, looks more like this:

The first, most obvious observation from our data, is that it is close. At times,  far closer than the polls in the actual race for the White House. Clinton’s website is currently more visible, but the lead has changed hands several times over the past 12 months.

Secondly, the national polling basically demonstrates a two-horse race (sorry, Gary Johnson), which means that, generally speaking, as one candidate’s popularity rises, the other’s falls, and vice versa. As expected, this is far from the case in terms of SEO Visibility, where our candidates are not just going head-to-head in the battle for votes, but are competing with newspapers, TV channels and other informational websites in the battle for Google rankings. 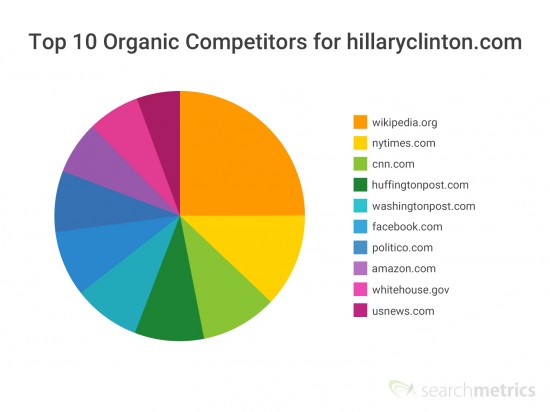 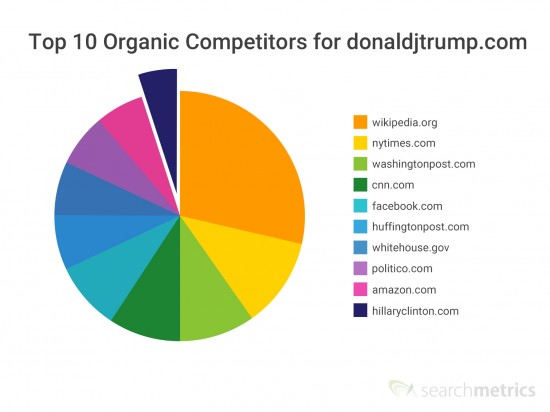 A look at each candidate’s top 10 organic competitors shows that hillaryclinton.com is only Trump’s 10th strongest competitor, whilst donaldjtrump.com is way down at 229th on Clinton’s list.

In spite of the competition, both candidates’ domains have significantly increased their SEO Visibility in tandem over the past few weeks, with both now at their highest level of the whole campaign. This suggests that both candidates are appealing to user intention better than ever as the Big Day draws ever nearer.

Money plays a key role in any US presidential campaign, with both candidates having spent in excess of 400 million USD to date. However, whilst both candidates’ overall campaign spending rose month-on-month from May thru September, this is not reflected in their investment in paid search engine advertising.

Both candidates’ Paid Visibility scores have fluctuated since July, with current levels at or close to zero. This shows that Paid Visibility is in no way connected to overall campaign spending.

Interestingly, the data also shows that whilst Clinton has been investing for over a year, Trump’s camp only began using any search engine advertising at all in the week to July 17, the week before his nomination at the Republican National Convention.

Bringing these two factors together, we decided to look at the content the two candidates provide on the issues, and how this affects their Visibility. To start with, Trump and Clinton each have a website section dedicated to their political policies. 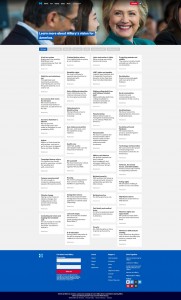 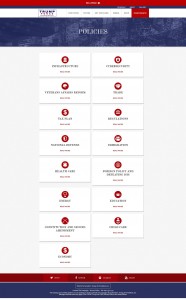 At first glance, Clinton seems to have information on far more issues than Trump. This impression is verified by using the Google site: operator, which returns a landslide 109 : 27 victory in favor of the number of URLs on Clinton’s issues page.

However, four times the URLs does not mean four times the Visibility, where the score is a much closer 10,052 : 7,551. With the Searchmetrics Research Cloud, we have been able to analyze these two directories and their content. By comparing the keywords each candidate ranks for, we can also understand the search intentions of people finding their pages.

Trump and Clinton’s topics and keywords

Not all voters care about the same things, just as not all Google searches have the same intention. So which issues are our candidates competing on? Which keywords do they share? Amongst the top 10 shared keywords, we find terms such as “immigration”, “tax” and “health care plans”, with Trump ranking more highly for almost two thirds (65%) of all shared keywords.

Furthermore, whilst Clinton’s issues page does rank for more unique keywords (1564 : 1303), there is an overload of personalized terms. Of the 75 keywords for which the former First Lady ranks in 1st position, all but two (97.4%) contain either “hillary”, “clinton” or both. By contrast, Trump’s policies page ranks in 1st position for fewer (17) unique keywords, but only three (17.6%) contain “donald” or “trump”. 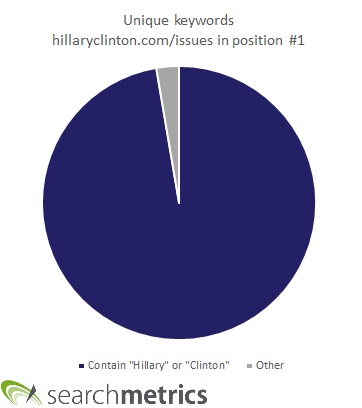 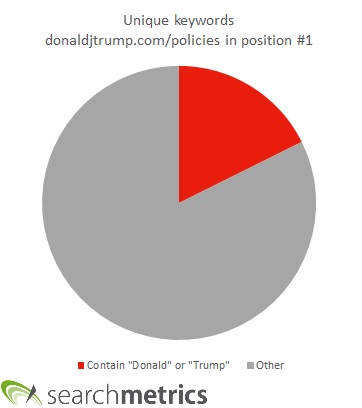 In terms of user intention, this shows that Trump and Clinton are reaching users with two quite different search intentions. Clinton’s page will be found primarily by users specifically looking for information on Clinton and her position on various policies. Trump’s page, by contrast, will be found by people searching for general information on the issues.

“The day I realized it can be smart to be shallow was, for me, a deep experience” – Donald J Trump

As well as the issues covered, we can conduct a content analysis of how each candidate addresses the issues. To do this best, we can compare the quality and depth of content on the candidates’ policy pages and, above all, how the content corresponds to what users are looking for.

The first strand of our analysis looks at the elements on the page. Here, let’s take Trump and Clinton’s pages on immigration as an example. The following overview shows what each page offers the user: 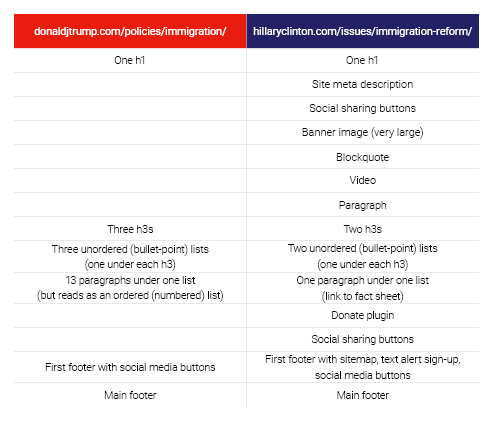 Trump’s page also has a side bar containing links/previews to an infographic gallery, video and transcript of a speech.

The overview makes it quickly apparent that Trump has fewer elements, and a look at the rivals’ pages shows that Trump’s content is presented in a more easily consumable way. 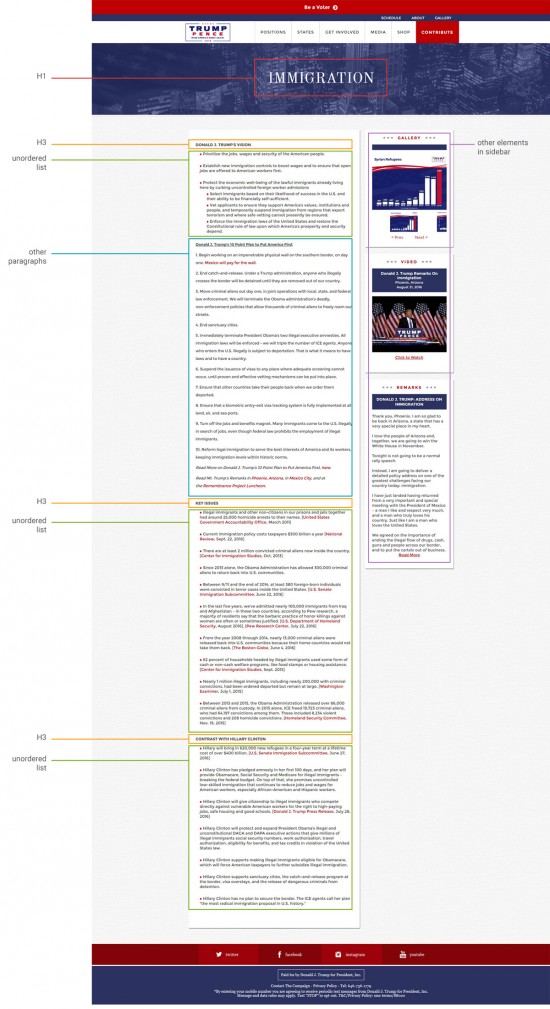 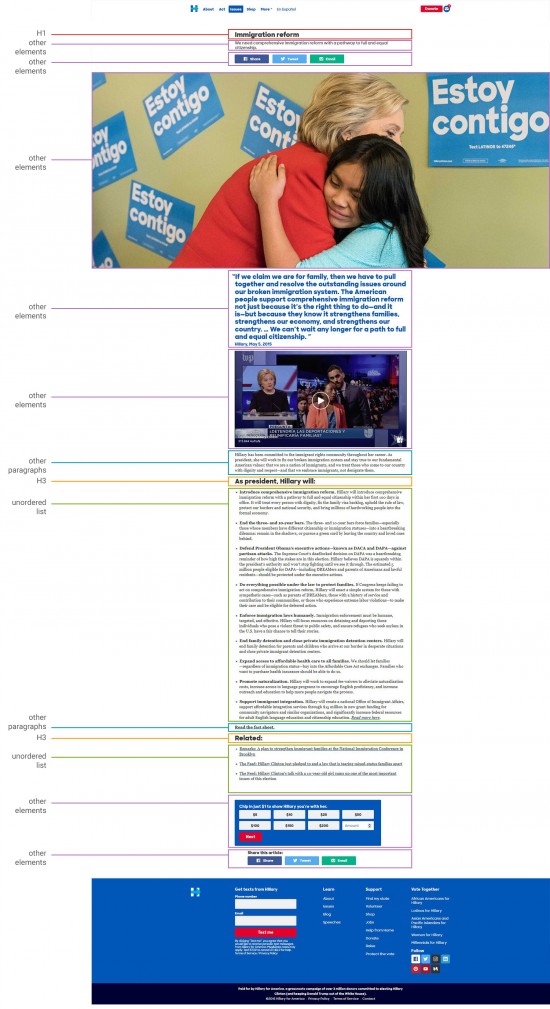 Whilst Trump’s content may appear more shallow, its response to the user’s request is clearer and it is structured in a way which makes finding information faster and simpler.

Furthermore, all of Trump’s policy pages have a (near) identical structure, with an h1, the same three identical h3s, and the sidebar elements. Clinton’s pages are less consistent. She has some fixed elements (e.g. meta description, blockquote) but some pages include a video and some don’t, and the number and wording of the h3s varies from page to page. Trump’s user-friendly advantages help his policy page keep up its Visibility, even though it cannot compete with Clinton in terms of content range and depth.

The other main aspect of a webpage’s content is the actual quality of the text and the topics it covers. An analysis of the keywords on the policy pages lets us discover how the content stacks up, which Google users it may appeal to, and how this reflects the respective candidates’ positions on the issues.

To demonstrate this, let’s take the issue of guns, where both candidates have a policy page. Trump’s is entitled “constitution and second amendment”, whilst Clinton’s is called “gun violence prevention”. The titles already give us an indication of the difference in priorities on this issue, but how is this reflected in the content? To find out, we can look at the ranking keywords. Here are the top keywords for each: 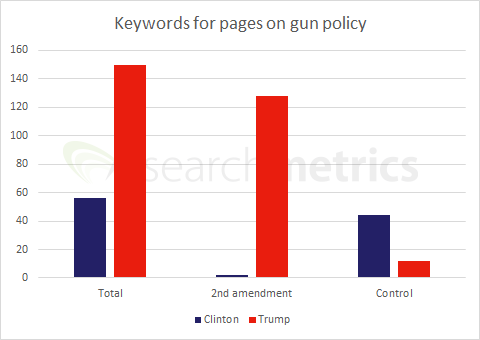 The diagram tells us four things:

This keyword comparison shows how the candidates’ political positions affect how they talk about the issue and how this affects their Google rankings. Both Trump and Clinton have pages which focus heavily on their chosen policy direction, meaning that both candidates are primarily preaching to their respective choirs.

In this example, Trump has a significant share (8%) of the overall search market for “second amendment rights”, whereas Clinton is nowhere. A content performance analysis of the democratic nominee’s page shows which relevant keywords she currently has covered: 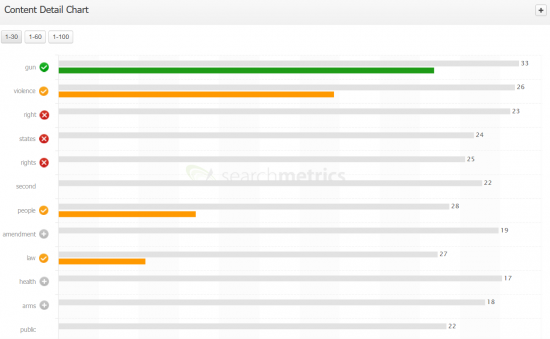 The only term adequately covered is “gun” with a whole slew of keywords either absent or insufficiently included. There is therefore enormous scope for adapting her content to include the other side of the issue, and potentially encroach on her opponent’s territory.

Are connections really everything? SEO Visibility and backlinks

Though falling in importance, backlinks remain one factor for Google in determining the organic Visibility of webpages. If we look at the numbers, Clinton has three times more backlinks than Trump. Yet there is far less of a gulf in their Visibility scores (Clinton just 1.4% higher). So what’s going on? Are the numbers rigged? 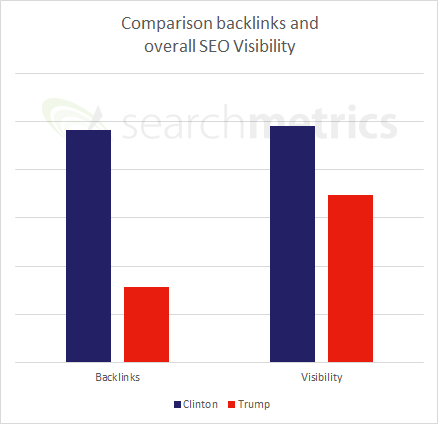 There are two likely explanations: One is that Trump’s links are better than Clinton’s, meaning that Google rates them more highly based on the host domain’s own reputation/ranking. The second is that donaldjtrump.com has other factors contributing to its Visibility, which compensate for his comparatively low number of links.

This could include his clear, focused content, as described above. In fact, as the importance of backlinks in determining a page’s Google rank has declined, this is the more likely scenario. However, it is possible that it is not just on the golf course where Trump has some of the best links in the world.

One main function of backlinks is providing source material or additional information. Each of Clinton’s policy pages ends with links to related information, whilst Trump (often) provides links to sources, such as news pages or his own press releases. However, when describing their opponent’s positions or statements, which they both do extensively, our data shows that neither has a single link on their entire domain to their rival’s campaign page. 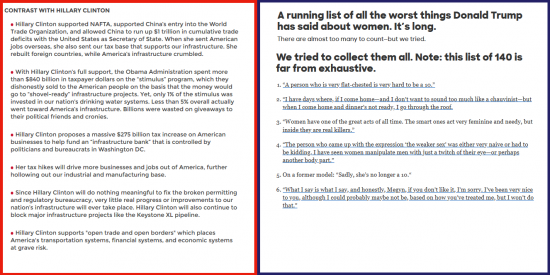 Although – theoretically – exchanging backlinks would be the best way of verifying their claims about their rival, and although this could potentially lead to increased Visibility for both candidates, we see that in a highly-competitive situation such as an election other factors take priority over providing the most comprehensive and transparent information possible to the user.

Interestingly, the Clinton campaign doesn’t mind linking to Donald Trump’s twitter page, possibly because she feels that the oftentimes angry, negative messages posted by her rival will be more help than hindrance to her own election chances.

The impact of Election Day after November 8

In conclusion, we can say that whilst, as with the overall polling, Clinton has a lead in terms of SEO Visibility, Trump is ahead on certain key issues. In particular, donaldjtrump.com is designed to appeal to users with specific intentions – and it does a very good job of reaching these users.

Pollsters, pundits and even Artificial Intelligence love to predict elections, but we are not going to embarrass ourselves by trying. However, we will be following events keenly on Tuesday and beyond Election Day, to see how people vote and how people search, and which of our candidates’ Visibility chart ends up looking like Mitt Romney’s from this time four years ago:

All data was gathered in the week beginning 31st October 2016, using the Searchmetrics Suite. As the clear market leader, Google US was the search engine used as the basis for data calculations. During our analysis, it was observed that some content on Donald Trump’s domain migrated in the week beginning 03.10.2016. This may have had some impact on the data.

SEO Visibility: The Visibility score represents how prominent an entire website is in the results pages of search engines like Google, based on a universal index. It is a figure developed by Searchmetrics which takes into account factors such as a website’s positions for individual keywords and the volume of monthly search requests. The SEO Visibility therefore makes a website’s online performance measurable and comparable with other domains.