Once more, it’s time to talk about Universal Search integrations. The One Boxes for Images, Videos, Shopping and Places have become a powerful traffic source for a few sites with the right optimization. However, it’s a source that can run dry even for heavyweights – a fact that we will illustrate a little later.

But first – what’s been happening with One Boxes over the last few months? We’ve had another look at the integrations for millions of keywords from the English and American indices. Here is our overview: 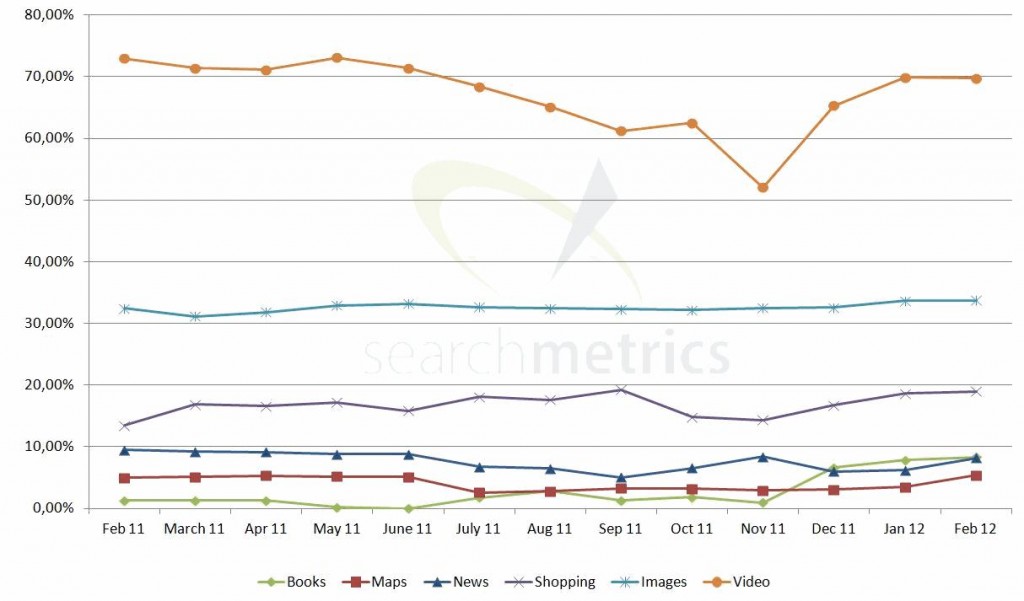 In the English index, video integrations have seen a lot of movement. However, after a somewhat dramatic loss in November they are now at an extremely strong 70% and once again at a high level. 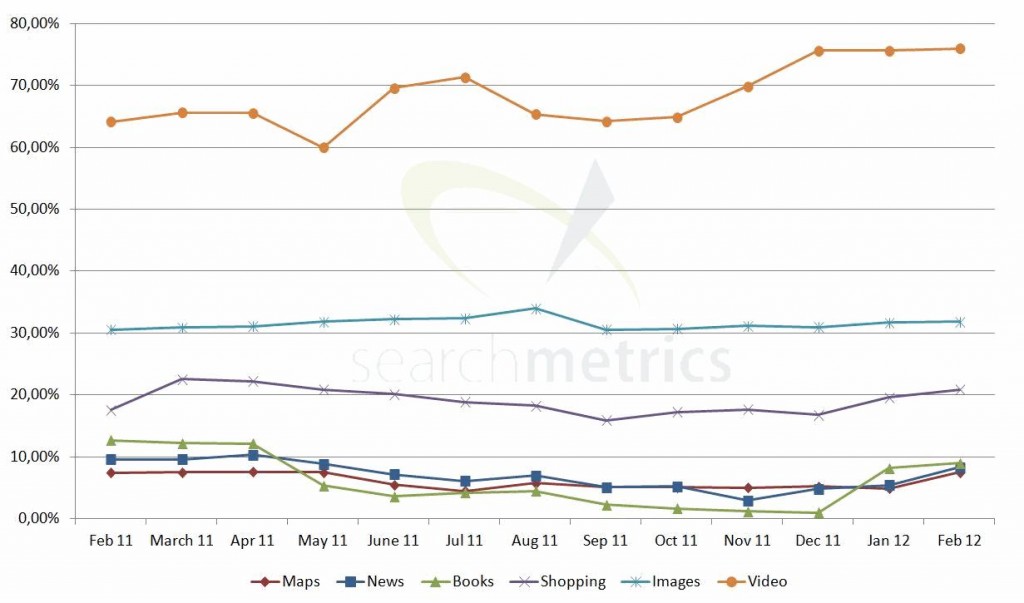 In the US index, the upward trend for videos is near unstoppable. Here, despite a slight end-of-year dip, the figure is almost 80%. In other words: video teasers are included in more than 75% of all search queries in the US index!

By the way, obviously many of you will notice that the sum total of all these One Boxes is greater than 100%, even though there are still search results without Universal Search. This is of course because results pages often include multiple One Boxes.

Added to this are advertisements, errors and other SERPs evaluations like stars and Search Plus Your World. With all this, it’s worth taking another look at the organic search results…

So let’s take a closer look at the weaker integrations in the British index: 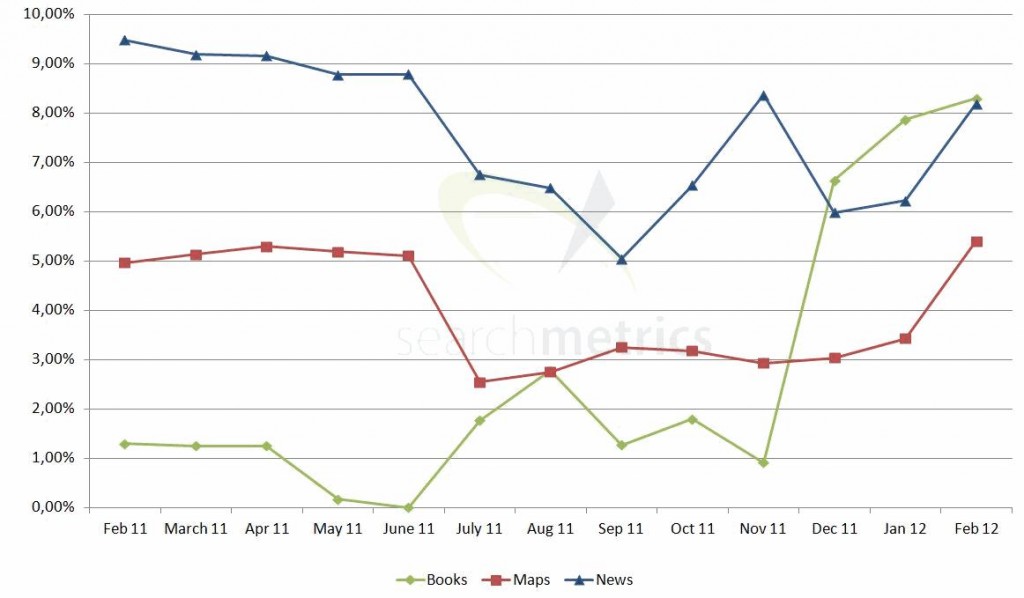 It is immediately apparent that Books, having nearly disappeared completely, just started receiving some SERPs support through December and the start of the year. Does Google still have big plans for Books? It could be, but maybe this was just an algorithm correction.

The trends for Maps and News are particularly interesting. Like videos, they also experienced a dip but are now near their original level. Here it’s also important that integrations only appear for location specific and news specific keywords and the more targeted (and perhaps also more precise) the responsible algorithm is, the less One Boxes there are to see. 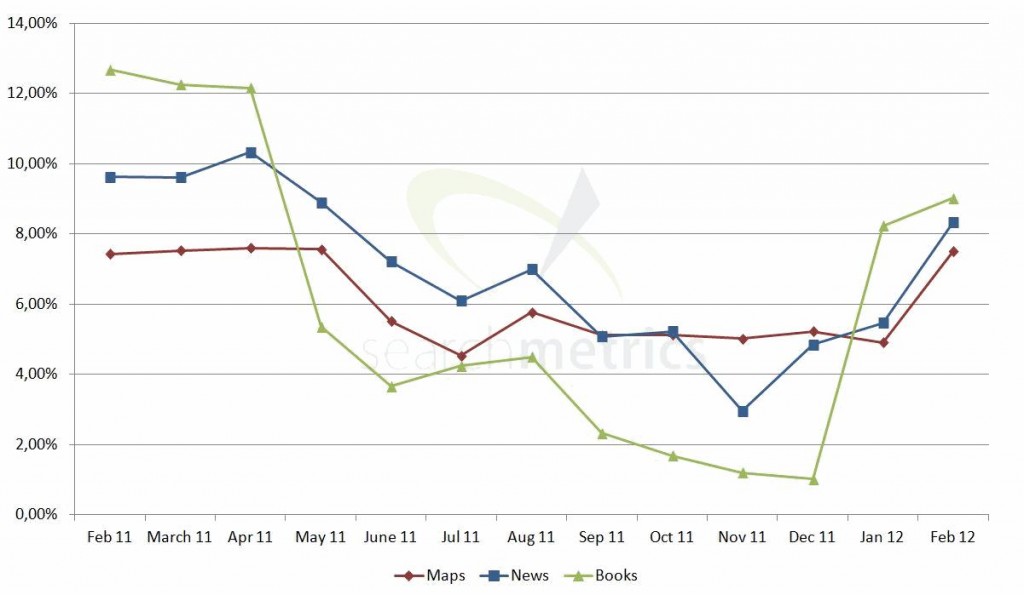 Something similar, if a little dampened appears in the US index. Here, all three smaller integrations struggled toward the end of 2011 before lifting again in the new year. Incidentally, something very similar occurs in the German index.

Who’s on top of Universal Search

As I mentioned at the start, Universal Search can be a a powerful traffic source. Let’s take a look at the sites that have benefited the most (from this source):

In comparison to observations in November 2011 a few things have changed:

So a lot has been happening and even the big players are not safe. That Bloomberg and The Independent can be so easily forced out of the News top ten like Flickr was from Images, is particularly notable. On the other hand, new entrants like 5min.com, holidayinn.com and even the Images winners are generally examples of well executed optimization.

This is also true for the US index:

Flickr.com’s loss is near universal across every Google locale search. Here are the Universal Search changes for Flickr.com. This could be a serious blow for the image platform.