Google has opened up its shopping ads to external providers and there is greatly increased competition for product ads. Around one third of ads in the British, German and French search results are provided by external services, Searchmetrics’ 2018 Google Shopping Study reveals. However, traditional product and price comparison portals are hardly found in these ads. Most are occupied by marketing agencies who bid for ads on behalf of online shops. Now, several large comparison sites, including Idealo and Comparado, have made a complaint to the European Commission. Their position is that Google Shopping’s distribution of ads is no fairer than before and they demand that the EU take further measures against Google.

In June 2017, the European Commission found that Google had been abusing its market dominance in the area of shopping ads, and issued a 2.4 billion Euro fine, as well as demanding that Google create more competition. Google then opened up its shopping ad auctions to external Comparison Shopping Services (CSS); and now competes with these external CSSs for positions. Google also introduced an incentive programme, SpendMatch, that rebates online merchants up to 30 percent of their shopping ad budget as cashback, if they book their ads via external CSSs, and not via Google itself.

For Searchmetrics’ Google Shopping Study, the search results in the UK, Germany and France were analyzed in the autumn of 2018. The results show that the changes made to Google Shopping have led to far more competition: Two thirds of ads now come from Google itself, one third are provided by external Comparison Shopping Services.

A closer analysis of the external competitors shows that traditional price and product comparison sites occupy just under nice percent of the market. By contrast, online marketing agencies have a total market share of 23 percent – providing far more competition to Google than traditional sites. These marketing agencies bid for shopping ads on behalf of online merchants. Their actual product comparison services, however, often only list articles from those merchants that they are managing the Google auction for.

Many of the marketing agencies are newly-founded businesses or newly-created shopping units of existing agencies. The following chart shows the top 10 external CSS, competing for shopping ads in the UK: 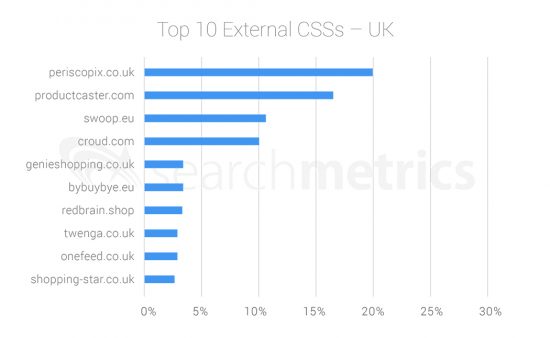 Looking at the top CSSs, the UK displays the largest diversity of all three analyzed markets. Four of the top 10 competitor CSSs have at least 10 percent of all CSS ads. In Germany and France only three CSSs have 10%+. Also, six of the 10 competitor CSSs are new and only started being listed by Google in the paid and/or unpaid search results in 2018.

Numerous traditional price and product comparison sites have raised doubts about the nature of the competition, and whether it conforms with o the European Commission’s demands for changes to Google’s shopping service. In an open letter of 22nd November 2018, addressed to the European Commission, their assessment is that the changes have done little to improve the competition.

“It has now been more than a year since Google introduced its auction-based “remedy”, and the harm to competition, consumers and innovation caused by Google’s illegal conduct has continued unabated. We therefore respectfully urge you to commence non-compliance proceedings against Google.”

The open letter’s signatories, 14 CEOs of European product comparison portals including Comparado, Idealo, Pricerunner and Visual Meta, go on to assert that:

In their letter, the 14 CEOs call on the European Commission to reject Google’s “non-compliant ‘compliance mechanism’” and demand a “remedy that adheres to the principle of equal treatment”.

Searchmetrics will continue to analyze how the competitive environment around Google Shopping develops – particularly once the incentive programme, SpendMatch, expires at the end of 2018. This can be expected to have an impact on the state of competition in the new year. You can register now to receive the 2019 Google Shopping analysis, and receive the whitepaper as soon as it is published:

Expert Analysis: “Agencies with their own pseudo-CSS are the true beneficiaries”

We have shared the results of our shopping study with SEA Expert and Director of Performance Advertising at Peak Ace, Marcel Prothmann. This is his take on the current Google Shopping situation and his view of what is likely to happen in 2019:

“A year and a half ago, in June 2017, Google had to accept defeat with regards to an EU lawsuit accusing them of violating antitrust laws on their Google Shopping platform. In response, they allowed CSS providers to advertise their customers’ products on their platform. Since then, there has been a major shift away from Google Shopping, with this year in particular seeing a greater reliance on external CSS providers. In compliance with the EU antitrust laws, these external CSS platforms had to be promoted by Google in order to balance competition.

However, as shown in Searchmetrics’ whitepaper, the comparison portals that should be benefitting from this more open competition (e.g. idealo.co.uk), are not. They are hardly being displayed in the search results at all. It is the agencies that have built their own pseudo-CSS, as well as other specialist CSS providers, that are emerging as the true beneficiaries of this scenario, and who are consequently reaping the rewards.

Despite the increase in competitors and the efforts to harmonise the CSS market, the entire CSS industry is still subject to the whims of the Googleverse. From a distance, the EU regulations seem to have paved the way for fair competition, but in reality, the winners are those who use multiple and/or performance-oriented CSSs. Since paid search is determined via an auction, Google will certainly be pleased with the many “new” or additional participants in each SERP’s auction.

Ultimately, a potential customer will not even see the CSS provider’s page because traffic has to be routed directly to the online shop. Why strengthen the CSE’s brand if I can use these simple one-click magnets in the SERP? Google has certainly taken a very interesting approach with this response to being found in violation of competition law. Shame on those who suspect foul play! ?

The year 2019 will bring numerous changes with regard to CSS. I am curious as to whether many will remain loyal to CSS providers after the clear cost advantages disappear, or whether Brussels will consider Google’s reaction to be sufficient. I have my doubts.“

This is the third time Searchmetrics has analyzed the competitive situation around Google Shopping. The story so far:

All the Google Shopping Insights

You can find all the data on Google Shopping in 2018, a competitor analysis and numerous facts and stats on the most visible CSSs in our three analyzed markets, UK, Germany and France, in our whitepaper. You can download your free copy by registering here: