For the third time in 2019, Google has published a global update to its core algorithm. The September 2019 Core Update was – in keeping with the tradition established by its predecessor in June – officially pre-announced by Google. The roll-out began on the 24th of September 2019. This Google Update will apply globally, meaning that it covers all markets and search indexes, as it includes alterations to the core of Google’s ranking algorithm. This blogpost provides the latest news and analysis of the Google September 2019 Core Update. If you have been affected by this Google Update, you can request a website audit from our Digital Strategies Group consultants:

Hit by the Google Update? Request an audit!

Google has adopted a new communication strategy for its Google Updates in 2019. Now, Core Updates that affect the central workings of the ranking algorithm are announced in advance via Twitter. In addition, Google suggests its own name for the update. Earlier in the year, Google confirmed and suggested a name for the March 2019 Core Update shortly after the roll-out. In the summer, Google announced the June 2019 Core Update before rolling it out, and provided the name via its Google Search Liaison Twitter feed.

This practice has been continued for the Google September 2019 Core Update, which was announced on the 24th of September, again via Twitter and again accompanied by a less-than-surprising suggestion for a name.

The September 2019 Core Update is now live and will be rolling out across our various data centers over the coming days. pic.twitter.com/DhJQ8AFUYL

Danny Sullivan, Google’s Search Liaison Officer, provided a few more details on the update, stating that the roll-out would take “a few days” to be fully completed, and that the Google September 2019 Core Update would affect all global search indexes. However, Google is not expecting to announce the completion of the roll-out, because smaller updates are continually being introduced, and so declaring the update complete could create a misleading impression and create scope for false interpretation.

I expect it to begin in a few hours; these typically take a few days to fully roll out. Yes, we'll post when the rollout begins. We don't post when it ends because there's typically other updates that are always happening, too. But after a few days, as said.

At the time of writing, it is not yet possible to draw any real conclusions regarding the impact of the Google September 2019 Core Update. The impact of this update, like the previous Core Update in June 2019, fails to show any consistent trend. At least so far. Elsewhere on the web, there are numerous familiar voices from the Twitter SEO scene reporting that a wide range of healthcare and financial services have been affected – including those covering sensitive E-A-T topics related to issues such as health or money. Here, as SEOs and webmasters report, there has been more movement than in other sectors. This tweet from Search Engine Land’s Barry Schwartz, along with the accompanying discussion, can be found here:

New poll for today: Anyone seeing and significant changes in rankings or traffic after the Google Sept. 2019 core update release?

Ranking volatility trackers such as Mozcast recorded a high level of turnover on the 24th of September, and more movement in the SERPs than normal. The following days also saw considerable change. In addition, users have reported changes in the Webmasterworld forum. All in all, we can say that the big bang this time (so far) has been missing, but Google is continuing its fine algorithm adjustments for sensitive consumer issues such as health & money.

A different story to the March and June Updates 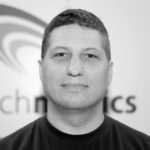 “Former Google Quality Raters are quite right to say that there aren’t any E.A.T. ranking factors as such, but that human Quality Raters evaluate E.A.T subjectively and often without clear reasoning. Google’s machine learning processes try to recognize patterns that are then be used by the algorithm without the engineers even knowing exactly what has changed. It’s the results that matter. However, there is no doubt that Google, with its mix of human input and machine learning, is aiming to improve its evaluation of these factors.”

We have observed that websites have been affected by the September Core Update in a variety of ways. For some searches, Websites with a strong link profile have improved. For other keywords, we see websites that have inferior backlinks, but superior content quality and keyword coverage (KPI in the Searchmetrics Content Experience), gain positions in the top 10.

One interesting observation is that, since the Core Update, Google seems to have increased the relevance it assigns to video content for many informational keywords.

Leading websites that had enjoyed position 1 rankings for a long time have dropped down to position 4 following the September Core Update, as they now lie behind three video results in a carousel. This position 4 is still the first traditional organic result, but it appears below the video carousel, and, in some cases, related questions and even a featured snippet or direct answer.

This dramatically lowers the probability of the result being clicked, which means that many losers of the Core Update will likely see a loss in traffic for their informational keywords (measured with the Google Search Console or their Analytics tool). This can happen even if no apparent loss in rankings in visible in their ranking tracker tools which fail to consider video carousel results. By the way: You can always check the latest data on video carousels and other SERP Features in our SERP Features Monitor.

It wouldn’t be a surprise if Google were to, at least in part, roll back this apparently extreme preferential treatment given to YouTube (which occupies well over 90% of the results in video carousels). If so, it’s possible that losers from the September Core Update could see a recovery, even without making any active changes. Immediately after the update, YouTube’s rise was so great that it even overtook Wikipedia as the leading website in the entire SEO Visibility index for Google.com:

For any update analysis, we always stress that changes in rankings and SEO Visibility aren’t always a direct consequence of the update – more information is provided in our explainer, “Understanding Google Updates“. If you have already noticed changes to your website as a result of the Google Update, then we would be happy to hear from you via the comments under this blogpost.

Google Core Updates: What webmasters & SEOs can do

In August 2019, Google published a post on its Google Webmaster Blog. Here, they explained in more details which changes to the algorithm are made by Core Updates, and what webmasters and SEOs can do if they have been affected by a Google Core Update.

If you see your rankings drop following an update, then you “haven’t violated [Google’s] webmaster guidelines nor been subjected to a manual or algorithmic action”. The changes are more focused on improving the evaluation of content. These changes can, according to Google, mean that websites that were previously unfairly overlooked, or not given the credit they deserve, now perform better – and vice versa. One analogy of how these Google Core Updates can be viewed could be a list of the 100 best films, published of 2015. A few years later, in 2019, the list can be updated – and it will likely change because new films have been released and the way we view older films may also have changed.

Google’s recommendations for webmasters and SEOs whose websites have been affected by a Google Update are as follows: “We suggest focusing on ensuring you’re offering the best content you can.” When auditing a website, Google suggests considering questions regarding the following four aspects:

Of course, Google doesn’t provide any clear-cut, universally-applicable advice regarding what to do following a Core Update. However, a good place for webmasters to start is trying to answer these questions as honestly as possible – and compare their website alongside their competition, with a particular focus on the quality of the content they are offering.

If you’ve been affected by this Google Update, then you can request further information and a analysis of your website our experts:

Affected by the latest Google Update? Request a website audit