Splitting a platform into more topic-specific domains can result in an enormous boost in SEO visibility. This is how former content farm about.com turned into a success story: Under the umbrella brand Dotdash, the split topic domains are among the winners in Google Core Updates – even during the Corona pandemic. All info and timeline on the Dotdash success story

Dotdash – the background to their beginnings

If you don’t know Dotdash, you may have heard of about.com. The domain was once one of the biggest portals with content from all subject areas and was one of the losers in every Google update. In 2014, about.com still had 75 million monthly users in the USA alone, mainly through organic traffic – a year later, the site was punished. Sites like about.com used to have the somewhat disrespectful nickname “content farm”, as these sites mainly relied on quantity: short articles with one focus keyword per URL.

In 2016 it turned itself around. About.com was rebranded as Dotdash, splitting the content into thematically relevant domains, including a detailed content and SEO audit as well as clustering similar URLs into new, useful and thematically distinctly upgraded landing pages. However, this trend of splitting was only the first stage; in 2018, Dotdash was able to significantly improve SEO visibility and performance in organic search results with further domain splits. For example, in addition to the health portal VeryWellHealth, there were now also the split domains VeryWellMind, VeryWellFit and VeryWellFamily. 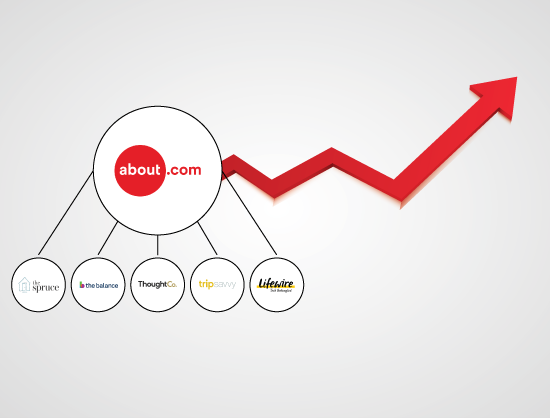 The extreme success of this strategy can still be seen today in the performance of SEO visibility. The split domains of the Dotdash network frequently increased during Google updates – most recently, there was an enormous upward trend during the Google Core Update in December 2020. In the meantime, Dotdash says it reaches every third US citizen at least once a month.

The web giant about.com was once one of the most successful websites in the world; is was a general shop with content from all subject areas provided by a large number of authors. Because the SEO visibility of about.com continued on a downward spiral and the domain was a permanent loser in Google updates, the emergency brake was applied in 2016. About.com was renamed DotDash.com and special interest domains were established. In the first domain split, six themed sites were opened: LifeWire.com (tech), TripSavvy.com (holidays), ThoughtCo.com (learning), TheSpruce.com (DIY), VeryWell.com (health) and TheBalance.com (jobs).

Also, in 2018, Dotdash expanded its content network to include websites such as Investopedia, Byrdie, SimplyRecipes, Serious Eats, TripSavy, ThoughtCo and many more, each with a focus on a clear topic area.

2020: Successful through the Core Updates

The success story of Dotdash and it’s individual brands goes on and on; the SEO visibility has increased continuously. In the Google Core Update in December 2020, Dotdash was able to record an enormous boost for many of the brands and their split domains. The most well-known and high-profile brands were able to benefit from Dotdash: The health portal VeryWell, the how-to portal The Spruce and the financial portal The Balance, each with its offshoots:

It is not only about.com that recorded heavy losses as a “general shop”. Competitors such as ehow.com or general Q&A portals have also recorded continuous losses for years. Content that is thematically bundled performs better than a wild mix of topics. This statement may not come as a surprise as, after all, thematically homogeneous websites are much more successful in serving user expectations perfectly. The clearer the thematic focus, the more precisely the wishes of the users and the requirements of the topic can be taken into account. This improves user signals, because users can more easily find and read additional relevant articles.

The traffic between the individual websites can flow much better; in addition, a separate link network is created. This universe sends better user signals and new links to Google. Below is a breakdown for traffic flow between individual domains to/from VeryWellFamily.com from SimilarWeb:

As Kevin Indig, Director of SEO at Shopify, noted in his blog post, a domain split could be the solution if a domain keeps getting hit negatively by Google Core Updates. Kevin looked at the performance of Dotdash split domains after the last Google update in 2020. The clearer topic focus and more accurate internal and external links created a sharper brand profile. This gives Google a better picture of the topics for which the brand deserves or would like to earn expert status – and thus also better rankings.

Need some advice on domain splitting?

We can help!  Get in touch for an obligation free chat about your website and how you could benefit from domain splitting.