Ni hao China! For years now, Searchmetrics has helped power the engines of commerce with Research Cloud. Marketers depend on our massive data and knowledge repository to find online content gaps and create strategies to outperform competitors. Today, we’re proud to announce that we’ve closed the one glaring gap in our global coverage. We’ve added Chinese e-commerce data to Research Cloud, giving anyone using our platform a powerful new tool to plan online campaigns – from a truly global perspective to one that’s hyper-local.

China has now become the 28th country to gain “membership” in the Searchmetrics Research Cloud. For the uninitiated, our Research Cloud contains more than 250 billion pieces of information, constantly updated to guide marketers through search, content, PPC, social and mobile. With unprecedented depth of detail, it visualizes and captures the potential, performance and relevance of every requested page in just a few clicks.

The story it tells helps marketers get to the heart of search and content performance by creating their own unique and engaging content – text, audio and video – that matches what people search for online.

The groundbreaking addition of China to the Research Cloud should only help savvy marketers gain a better fundamental understanding of the risks and rewards of doing business in this fantastic mega-market. Our data is based on Baidu, the leading search engine in China, with billions of queries passing through its servers annually.

What’s Your Strategy for Chinese E-Commerce?

Creating a successful online strategy and navigating through China’s rules and regulations can be daunting at the best of times. Amazon and Google, powerhouses elsewhere, take a back seat to Alibaba and Baidu. WeChat holds the crown in social, leaving Facebook in the dust.  Heft clearly is not all it takes to succeed in China. Anyone braving the market must be armed with every tool  and piece of data possible to increase chances of succeeding over time.

So “Huānyíng, China!“ – Welcome to the Research Cloud! To celebrate, here are 10 facts to get you up to speed on what makes the Chinese online market like no other in the world!

10. China has more internet users than any other country

A total of 700 million people in China are online. However, that amounts only to half of China’s 1.4 billion-strong population. It’s a reason why virtually every company looking for growth eyes China for its untapped potential.

9. China is the world’s largest market for e-commerce

Nearly half of all e-commerce worldwide is generated in China – almost a trillion USD this year. Furthermore, China’s contribution to global e-commerce transactions are expected to reach 60 percent by 2020.

8. The Chinese for Amazon is Alibaba

Whilst the giants of Silicon Valley may have difficulty gaining a foothold, there are several big players who have found a measure of success in China, including Apple. In online retail, Amazon dominates elsewhere, but it is Alibaba that has a grip on the Chinese market. Founder and CEO Jack Ma has firmly established the shopping platforms taobao.com and tmall.com.

Since the 1990s, Singles’ Day has been celebrated in China every year on the 11th of November. The holiday was first introduced to give singles a non-commercial equivalent to Valentine’s Day. Today, Singles’ Day has become the most important shopping date on the Chinese calendar, as singles try to buy their own happiness. In 2015, according to Businessinsider, Alibaba alone generated 14.3 billion USD in the space of 24 hours.

6. You don’t google things in China, you baidu them

Google pulled out of the Chinese market in 2010 due to censorship stipulations imposed by the Chinese government and because of problems with hacking. Homegrown search engine Baidu has filled the void. Baidu is now challenging its California-based rival around the world, as it looks to win the foot race against Google in other promising new areas of research, including self-driving cars and artificial intelligence.

5. Baidu is the most visible domain in the world

Over 400 million visibility points in the Searchmetrics Research Cloud – no website on the planet is more visible than baidu.com. By comparison: The USA’s top website, wikipedia.org, has a visibility score of around 50 million. The following table shows the 10 Chinese websites with the highest SEO visibility: 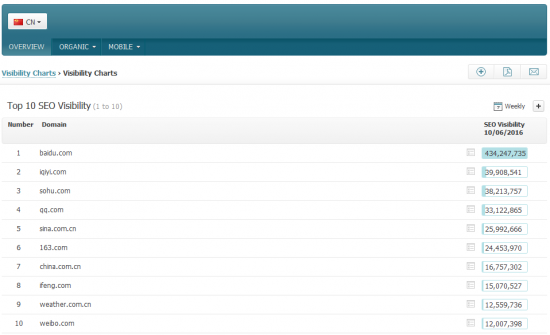 4. Google could be coming back to China

As we said earlier, Google largely ceased its operations in China in 2010. According to Google CEO, Sundar Pichai, the company is now considering a return: “Where possible, we want to be in China serving Chinese users.”

3. The government likes its Internet “clean” and tidy

Although the market offers enormous potential, both Chinese and foreign companies have had to deal with government regulations, censorship and the risk of hacker attacks. One of the country’s largest news platforms, sohu.com, was recently instructed to “clean up” parts of its news page ahead of the 19th Party Congress in 2017. Baidu was also ordered to make changes to advertisements in its search results after a student suffering from cancer died following a course of therapy he found in through an advert in Baidu’s results. Baidu is currently working on implementing the required alterations – until it does, no adverts will be displayed in its search results, as a look at the Research Cloud shows:

Forget Twitter or Facebook, the most popular messaging service in China is WeChat, with almost every Internet user in the country having an account. However, it is not just the revenue from the social network that makes Tencent, the company behind WeChat, one of the top 3 online enterprises in China. Tencent can multi-task. Besides chat, the company also deals in online games, e-commerce, online advertising and web portals like qq.com.

1. A one-stop-app for all your needs

The development of apps in the Western world usually follows a clear pattern: Provide one specialized function per app – keep it simple. In China, apps are real all-rounders – like WeChat, which doesn’t just let its nearly 900 million users talk to each other, but also shop online, pay utility bills, call a taxi, send money to friends, donate to charity and much much more.