Amazon is the largest marketplace the world has ever seen, and more product searches take place directly within Amazon than on Google. However, Google remains an important source of traffic for all online retailers, including Amazon. In this analysis, we take a detailed look at how Amazon uses a combination of organic and paid listings to vie for shoppers’ clicks, which strategies Google follows in the battle for product search, and how Amazon continues to fight back.

You can get more background, data and analysis of product search on Google in our comprehensive Google Shopping analysis:

Although more product searches start on Amazon, a huge number still take place on Google, with web search the most common first touchpoint for most searches. We can assume that shoppers who start at Amazon will likely end at Amazon, so this study analyzes Amazon’s positioning in the search results pages of Google.com. To create a suitable dataset, we took 10,000 keywords, for which Amazon occupies the first organic ranking position in the search results. In this way, we are focusing on search terms that are giving Amazon the maximum available organic traffic that Google can offer.

With the keyword set established, we were ready to analyze 10,000 Google SERPs and see how Google and Amazon are competing in the battle for product search. This report is divided into four sections (dubbed “rounds”), which lets us see how the balance of power between Google and Amazon lies for different aspects of the search results pages:

Enough of the preliminaries. Seconds out, round one.

Round One: Google AdWords

The most obvious way for any website to supplement their organic listings, and to guarantee themselves a spot at the top of the Google search results, is to purchase paid Google results via AdWords. Paid listings are charged on a cost-per-click basis according to the competitiveness of the keyword, and can either appear above or below the organic search results.

The question is, if a website is already ranking for free in the top organic position, then does it need to also invest in paid results? Amazon’s answer is evidently: Sometimes. In this example, Amazon has the top AdWords result and the top organic result (as well as two ads in the Google Shopping box). 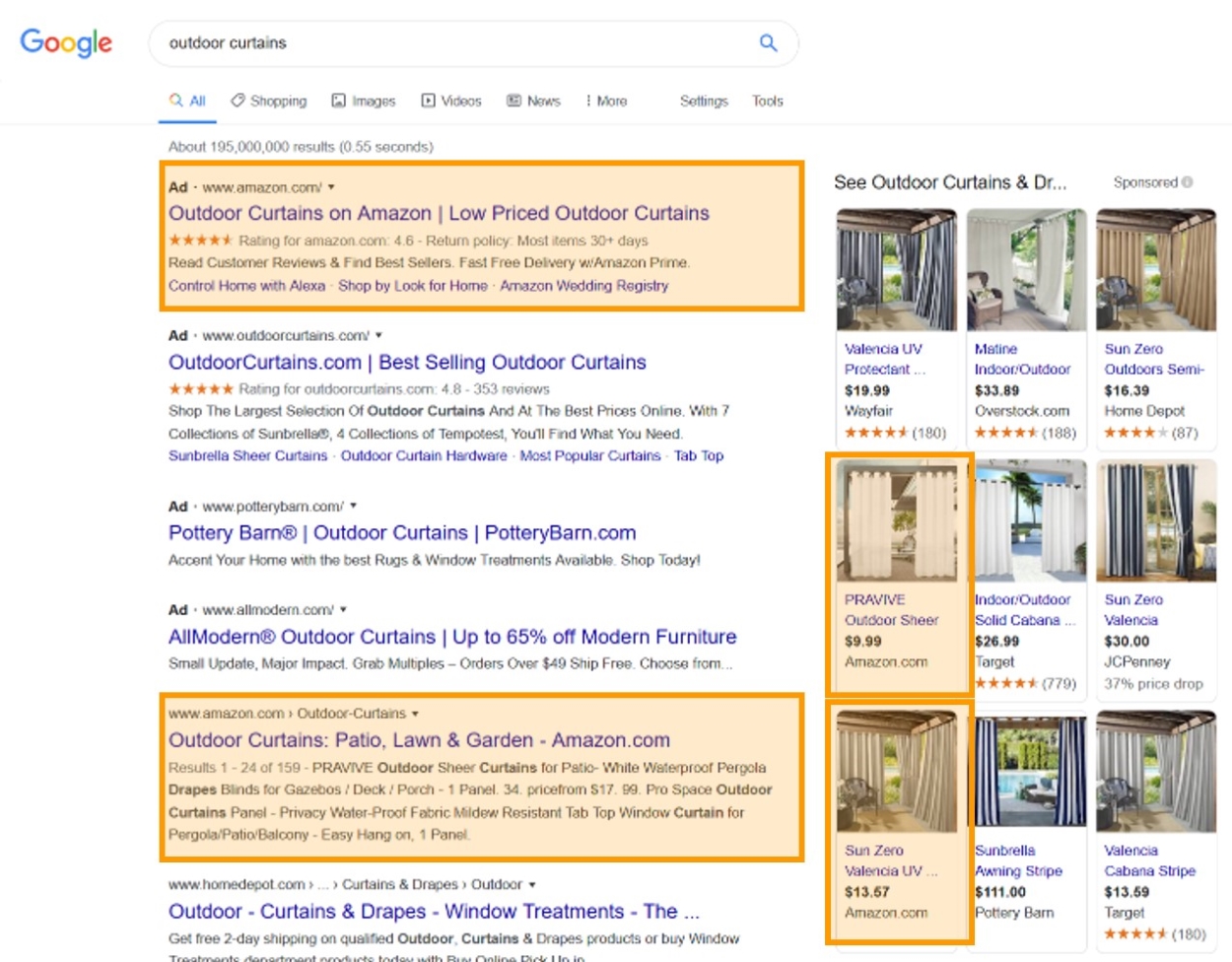 The data shows that paid AdWord listings appear for 27.5% of keywords when Amazon ranks on the 1st organic position. More specifically, 12.8% of keywords have AdWords above the organic results, 21.5% have AdWords below, and 6.9% have both. Amazon buys some kind of AdWords (top or bottom) for 10.5% of the keywords analyzed, giving it duplicate organic/paid listings. More details are in the chart below.

As there can be more than one paid listing above (or below) the organic results, it is interesting to see how many of each appear. For the keywords analyzed with Top AdWords, the average number is 1.6, with most having either one or two paid results. For bottom AdWords, the rate is slightly higher, at 1.9 per search results page. When looking at the total number of ads, we see that 12.9% of top ads and 19.8% of bottom ads are placed by amazon.com, with the rest being bought by competitor domains.

This shows that there is often competition between paid and unpaid listings for Amazon’s top organic keywords. In response, Amazon fights back against its competitors by purchasing a large number of AdWords itself, even when it has the top free result. However, as Google benefits whoever buys AdWords, and Amazon is paying for listings despite having the most relevant organic result, round one definitely goes to Google.

Round Two: Images and Videos

In addition to the organic search results and paying for AdWords, an excellent way of occupying more of the visible space on the search results page and gaining more clicks, is to rank with SERP Features. Images and videos (as well as other integrations like maps and news) provide highly-visible, free sources of traffic.

Particularly for product searches, it is understandable that shoppers want to know what something looks like (image) or how to use it (video) before making a purchase decision, so these two SERP Features have a key role to play here. In this example, Amazon has six of the images in the image box, as well as the top two organic results and a AdWords listing. The videos, as is commonplace, all come from YouTube. 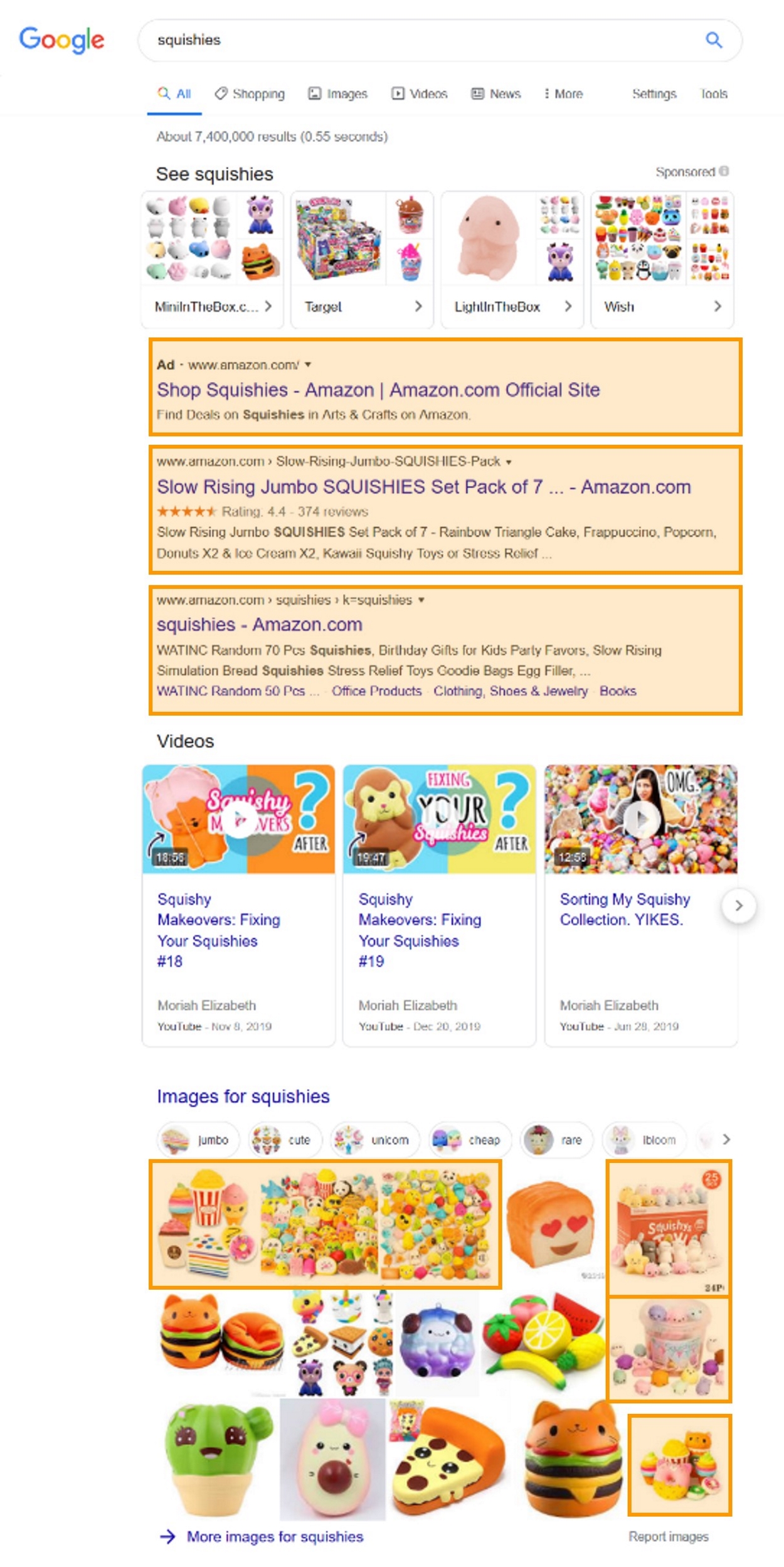 For keywords where Amazon ranks with the top organic result, images appear 43.8% of the time, and videos (in video carousels) appear for 34.5% of searches. In fact, 12.9% of SERPs contain both image and video carousels amongst the regular organic listings. In this way, Google is opening up sizeable ranking opportunities beyond the traditional snippets. And here, we see that Amazon is taking full advantage of one of these opportunities, with Amazon appearing in image boxes on 41.5% of SERPs where it also has the top ranking, meaning that there are very few image boxes without an Amazon result. Video is a different story, as Amazon doesn’t provide any video content that appears in video carousels.

Image boxes can contain several results, with an average 11.8 images appearing in our analyzed dataset. And here, Amazon is very well represented, providing almost a quarter (23.4%) of all the image results appearing on the SERPs for keywords where it occupies the top ranking position. Our analysis demonstrates how well Amazon is able to supplement its number one organic rankings with visual links on the SERP, creating an additional, attractive traffic source. However, as Amazon fails to appear in any video carousels, it is missing out on a large source of potential traffic. The overwhelming majority of video carousel results are held by Google-owned youtube.com, meaning that we have a split decision at the end of round two in our battle for product search.

Google Shopping ads, also known as Product Listing Ads, create a very different shopping experience from AdWords, as they include an image, price, further information such as “Special offer”, and a direct link to the product page. Google Shopping is the search giant’s own product comparison site, as users can browse and compare a range of product options within Google’s service, before making their decision and navigation to the shop of their choice. In Europe, Google’s positioning as a rival to existing product comparison sites has been the subject of much criticism and billion-Euro penalties, as discussed in our Google Shopping whitepapers.

Google Shopping ads are displayed for well over half (56.0%) of keywords, for which Amazon occupies the top organic ranking slot. This means that is more likely than not that Amazon’s organic snippet is competing for searchers’ attention with a carousel of product offers. The height of the Google Shopping unit, particularly if followed by one or two paid AdWords results, can push the first organic result below the fold for desktop users. In this example, Amazon has three immediately visible ads in the Google Shopping unit, three more when the carousel is expanded (and more if expanded further), as well as the top organic search result.

The number of ads appearing in shopping boxes varies greatly, with the carousels usually expanding (multiple times) to reveal dozens of products. Amazon appears in the Google Shopping box for 31.1% of the keywords analyzed, and owns a total of 16.2% of the individual Google Shopping ads found.

This is a strong presence for a single domain and one which underlines the investment Amazon makes in paid advertising in Google search, in order to complement its rankings at the top of the search results. However, as every click on one of Amazon’s Google Shopping ads is funnelling revenue to Google, this is perhaps best viewed as a win-win for both companies, making the third round of our bout another one you could call either way.

Google search isn’t all about paid listings and SERP Features. The organic search results are still a huge driver of traffic and this is by no means limited to the top-ranking result. According to Google, today’s unique customer journey includes making several searches and visiting numerous pages, and searching again, before making a purchase decision.

For this reason, appearing more than once on page 1 of Google’s organic search results makes it possible to present users with more of your product options and increases the likelihood of generating a touchpoint between your business and the shopper. Although last year’s Site Diversity Update aimed to limit the number of multiple listings from a single domain, Searchmetrics’ analysis found that it remains common for a website to appear two or three times on a single SERP, with the update mainly targeting domains appearing 4 or more times for a single keyword.

In this (rare) example, Amazon does manage to occupy the top 4 organic results, as well as purchasing Google Shopping ads and appearing in the image box. 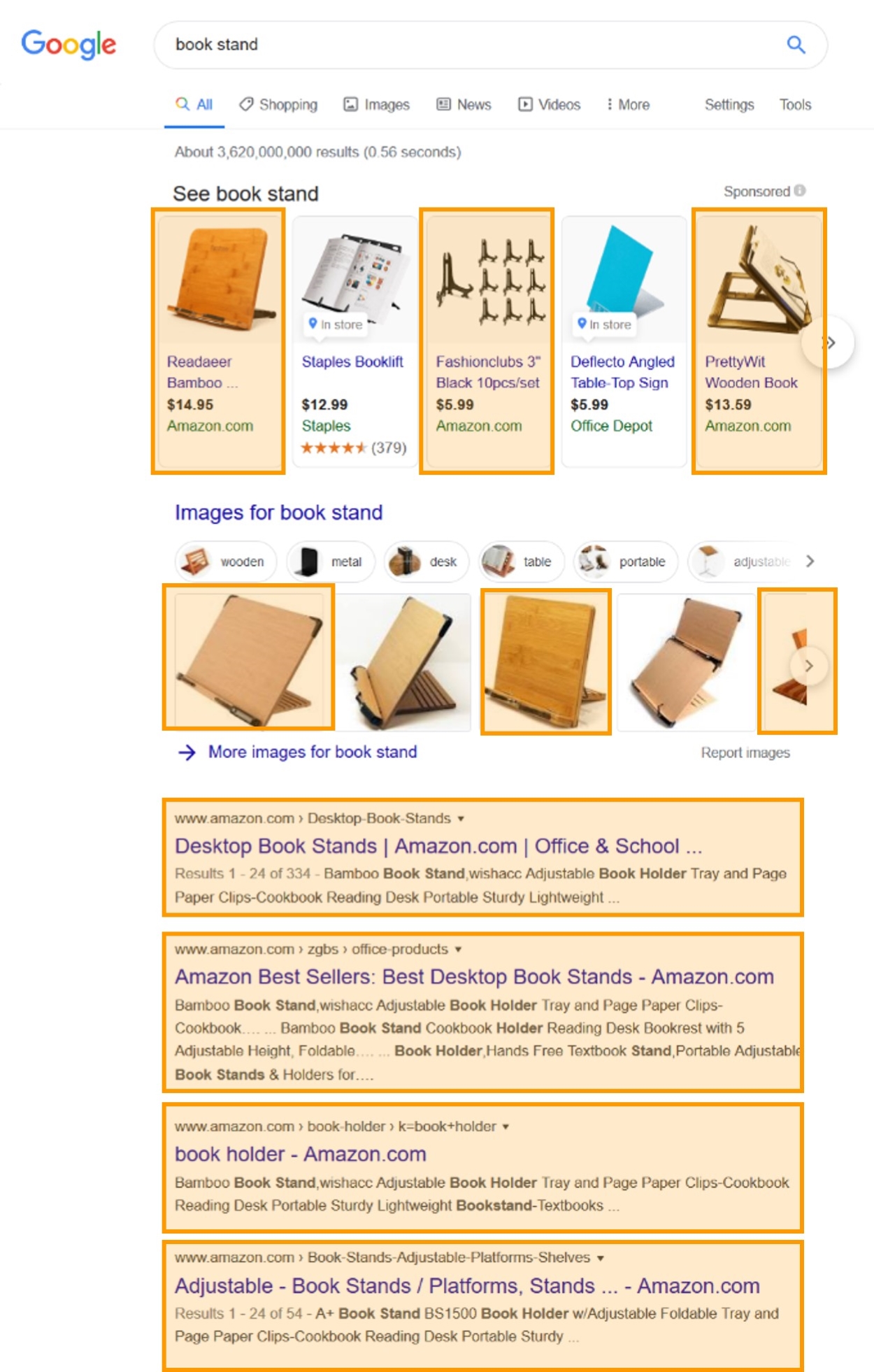 Even if you already have the top-ranking position, you can benefit from more rankings. Amazon has at least one other (and it is normally limited to one other) organic result for 45.0% of the keywords for which it is already ranking on position one. This demonstrates Amazon’s ability, with its unrivalled product portfolio, to provide search results that Google’s algorithm considers relevant and so continue to gain valuable eyeballs and clicks on the first search results page. Round four goes to Amazon.

And the winner is…to be decided

Our analysis shows that Amazon occupies a large amount of the additional space on the SERPs for which it already commands the top organic ranking position. Amazon performs strongly in image integrations and wins many additional organic results, as well as buying heavily into Google Shopping and, to a lesser extent, Google’s AdWords for paid text listings. From Google’s point of view, Amazon’s extensive participation in its ad services is not only a major source of revenue, but evidence that Amazon isn’t prepared to bid farewell to Google search as a source of customers.

The battle goes on. Google continues to develop zero-click SERP Features such as direct answers, extended knowledge/medical panels and related questions, which keep users in the Google universe. Furthermore, the bumping of organic listings that duplicate a Featured Snippet to page 2 may further limit a single domain capacity to dominate the SERP for a given keyword. As for Amazon, its unmatched market position at consumers’ top-of-mind means that Google cannot afford not to rate its pages as relevant for product searches, unless it wants more of its users to turn to Amazon as their number one product search engine of choice.

Want to stay up-to-date with SEO and marketing news, and get all the latest analysis? Then why not subscribe to our free monthly newsletter?

Get the latest SEO news!