Are you ready for your oral exams? The new smart speaker voice assistant category could be the biggest test yet for companies relying on the world of online search to make money. But don’t count on simply tweaking your existing search engine optimization strategies to succeed. In our latest Unwrapping the Secrets of SEO, we detail some surprising (and worrying) trends that will serve as a test of every marketer’s bottom line.

The 1968 film “2001: A Space Odyssey”  delves into technology, human evolution and artificial intelligence. Such technology is no longer science fiction. Amazon in 2015 sparked a trend toward mainstream consumer acceptance of AI when it upended the home speaker market with the surprising success of its Alexa voice assistant built into the Amazon Echo.

Now, smart speakers and other devices with voice assistants are fast becoming a popular way for consumers to search for everything from recipes to travel destinations. At home, these always-listening, handsfree devices could become more of a go-to than smartphones and tablets. The battle of the SERPs then becomes all the more important because smart speakers give a very narrow set of results – typically one. There are no runners-up.

If that doesn’t scare a marketer, the stats also show you can no longer afford to tread lightly in this category. Some 7 percent, or nearly 9 million, of US households, already own a smart speaker like the Echo and Google Home devices. Apple this fall will release the HomePod with Siri, Harmon Kardon will offer one with Microsoft’s Cortana, and Samsung Electronics has reportedly been considering marketing one with its Bixby smart assistant. By 2020, Gartner Edison Research estimates 75 percent of US homes will have one or more of these smart speakers around to rustle up takeout dinner, buy groceries and book trips.

While a big market, the US is just the harbinger of things to come. Amazon has expanded its Echo sales into the UK and Germany, and more countries are sure to follow. No doubt Apple and other consumer electronics giants are eyeing grabbing global share ahead of Amazon, which dominates with 70 percent share of the US market.

Optimizing for voice search may be easier said than done. In the era of machine learning, Google and other search engines have been adept at understanding the specifics of what someone is asking online, whether they’re looking for information, looking to buy or looking for directions. Spoken language is a different beast. People tend not to talk in complete sentences, or interrupt themselves with “ums” and other garbled or completely unintelligible words. Then, too, specific intonations or dialects can trip up the best of us when trying to understand someone else.

To get a better early handle on the market ourselves, we spent a couple of weeks playing with a Google Home smart speaker in order to test Google Assistant’s search skills, and then compared results we received with desktop and mobile results.  We chose to discuss a Google Home over an Echo (which we tested too) because of Google’s dominance in the search category. With its history of AI research, it’s a good litmus test of how search may go on other platforms. 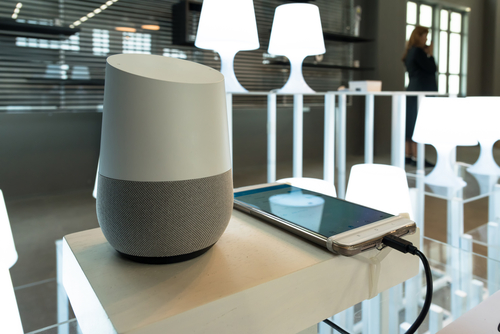 For now, those who focus on navigational and transactional search have a little breathing room. With navigational search, the search intent is typically so clear that results are a foregone conclusion. Marketers are rushing to compete here by creating voice-activated apps, or so-called skills. Local news outlets and travel and transportation sites like Uber and Lyft in particular are rushing to be heard on smart speakers.

It’s early days, too, for transactional search, though the window here may not be as wide open as some think. Amazon already has an early leg up with its Echo devices by tying purchases directly to amazon.com. It’s not hard to imagine that consumers soon can talk to their smart speakers to order local groceries and meals from Whole Foods, which Amazon recently agreed to buy. Or to shop for new Kenmore appliances, the Sears brand that Amazon agreed to sell online  in mid-July. In our tests using an Amazon Echo Show device, in fact, Alexa couldn’t find answers for many of the search queries you’d find using desktop and mobile devices. That means online marketers must rush to form partnerships with a variety of smart speaker players to compete for share of voice.

To be sure, Amazon isn’t the only self-serving smart speaker maker. Users can purchase an airplane ticket on Google Home in a step-by-step search query, offering the cheapest available options and ability to read your credit card number to it. Google integrated Flight Search into its algorithm in 2011, so no surprise there. It’s bad news, however, for aggregator sites like booking.com and expedia.com and suggests travel sites should move fast to create voice activated apps if they don’t want to be left behind.

Your Guess is As Good as Mine

Where the SERP wars get really interesting is with informational search queries. While such searches are hard to monetize, optimizing SEO for informational searches is key for brand recognition and to maintain authority online. We found, however, that Google’s algorithm currently thinks about various devices a bit differently for some informational queries.

Take the query, “what is brexit.” On desktop, mobile and Google Home, the first answer conforms to Google’s increasing use of the Knowledge Graph, giving searchers an answer fast and quick. For mobile, of course, Google then positions video explainers from reputable news and information sources. The smart speaker offers the same first answer, and attributes it clearly to the Oxford (Google-skinned) dictionary. The other 9.34 million results found in desktop results, including from wikipedia, are ignored! 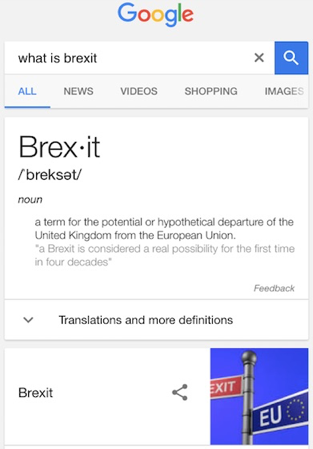 The same general practice held true for searches such as ‘when is the next Christmas,’ ‘where is the nearest pharmacy,’ and ‘who is the first president of the usa?’ 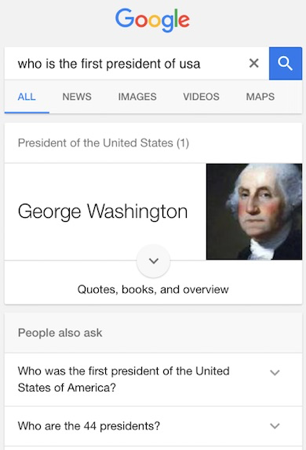 Sounds good, right? Not quite. When we asked ‘which is the highest mountain? Everest or Kilimanjaro, Google Home threw the SERP results for a loop. While desktop and mobile results matched with a Direct Answer from trekili.com…

…Google Home dug deeper into the SERP, turning up the No. 4 desktop and mobile answer from climbkilimanjaro.com, which offers a written headline of Kilimanjaro Facts that will impress you and climbing friends. While both sites attempt to sell climbing adventures, it appears Google Home currently optimizes for a non-shopping experience.

To test that theory further, we went to a standby favorite: how to tie a tie. Here, ties.com wins hands-down on desktop and mobile, with results optimized for a direct answer (with tie-tying pictures) and first in the SERP. Yet Google Home ignored ties.com, offering a result way down in the SERP from esquire.com. 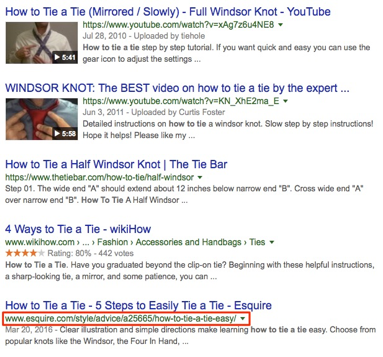 Some of the more baffling results come from other seemingly simple informational queries. When we asked ‘tallest man in the NBA,’ Google Home draws from a 2015 article on mashable.com, while desktop and mobile standardize on Sports Illustrated’s si.com Direct Answer and article, also from 2015. The Mashable article, interestingly, is about the world’s tallest man, which may suggest Google is anticipating a follow-on question from the voice searcher. The si.com article offers a list of the tallest NBA stars in history.

Google Home also begs to differ in a search for who has the highest recorded IQ? On desktop and mobile, scienceabc.com lists the winners in ascending order, topping out with William James Sidis, a child prodigy who died at the age of 46. Google Home offers up Marilyn vos Savant, a magazine lecturer and playwright who doesn’t even make scienceabc.com’s list.

What’s it All Mean?

Our biggest takeaway is that marketers shouldn’t panic (yet) about the world of smart speakers and other smart home products. It’s clear Google and others are still figuring things out. The trouble is that Amazon’s head start in the market, with its great name recognition and integration of Echo into the Prime shopping experience, could quickly become a problem for other eCommerce players who aren’t now working on voice apps and partnerships with other big names in consumer electronics.

The difference in the Google search results represents both opportunity and challenge in optimizing for home voice-activated search. The common theme we found here was a just-the-facts mentality right now. But as we’ve seen with both mobile and desktop, Google is never one to stand still in the search game. It’s likely to leave more than a few players breathless.