Well sports fans, it’s time for another season on the grid-iron. When the hardened fans and bandwagon jumpers alike don their colors for battle. While the ultimate prize won’t be snatched up for many months, we thought it would be a fun exercise to see who’d triumph in the more important venue; Search Visibility.

Over the next few days we’ll be publishing the road to the championship based on how prevalent the teams websites are in the world of search and social (more and more part of the SERP display landscape). Who will come out on top? Who’s got the kick-ass search marketing team? Who’s the most social? We shall see. 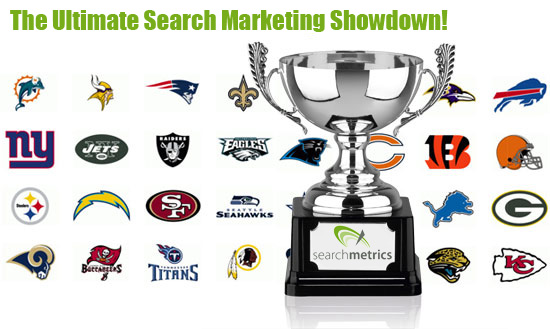 For starters, don’t get all worked up. This is not meant to be some kind of meaningful study. We’re just having some fun with data. Ok? Here’s what I used;

SEO Visibility – the Searchmetrics scoring system that looks at over-all presence of a domain in the SERPs. This metric was certainly a core metric of importance that was highly valued.

I have a more detailed description of this coming out next week here. Be sure to subscribe.

Social Visibility – another one that’s a bit of a no brainer. If it is social postings and accounts that are in the SERPs or the fact that social elements affect rankings (especially in the logged in state), social is something that has it’s place in the search result landscape.

Universal Elements – another thing we know is that the concepts related to click bias (that users click top listings more than lower ones) can be overcome to a degree with universal listings (images, video, news etc). Here we valued ‘news‘ and ‘videos‘ over ‘images‘ and ‘maps‘, over the last 12 months. I scored this on a 1-10 scale for visibility.

Paid Visibility – this looks at the presence of the domain from the standpoint of paid advertising. It wasn’t as heavily weighted as SEO Visibility, but worth having in the mix as it is indeed part of the SERP landscape. This was our lowest valued metric.

Now that we had our metrics, it was time to get the teams in and see how they stacked up!

First off, let’s look at all the teams. Who’s a lock for the playoffs? How’s the wildcard matches shaping up? The anticipation is just killing me.

In the AFC, the world of social was weaker (than the NFC) with the Steelers and Ravens having the strongest presence. The East division had the strongest SEO visibility ratings and the Patriots in particular, having the best balance. The AFC South was the weakest division of the three but at least the Colts made up some limited ground with the strongest paid search showing in the conference. While the Bronco’s managed to make it to the playoffs, I doubt they’ll be strong enough to contend.

Over in the NFC, the North division was extremely strong on the social front, as well as SEO visibility. The NFC East was also strong in SEO, but a bit behind on the social scene. Sadly the Southern division lagged behind other than the Saints, who had some reasonable social traction. Most of them weren’t strong on paid search presence, except for the Giants, who seem to be more than a little active.

I know, fast season right? We’ve come to the end of another grueling season and things have rounded into form quickly. The match-ups are set and the band-wagon jumpers are surely changing allegiances as we speak.

Be sure to join us tomorrow for the AFC and NFC playoffs (two posts) as well as the Big Game, on Wednesday. Along the way I’ll also start to show you what any of this might actually mean. Beyond just being fun to do.

Do you think you know who’s gonna’ win? I dare ya to try (leave a comment). There may be a few surprises ahead. I can say that much. We might even have to pull some other data out of the bag to decide some overtime sessions. Grab our feed – and I’ll see you there!