The car rental business has joined the ranks of those sectors in which transactions are now primarily handled online. But is it more blessed to rent than to buy? Not necessarily. Still, handling transactions on the Internet – whether for business or pleasure – is virtually the predestination of an Internet business. For this reason, it is all the more important for all market players to perform well in search engines. We have examined how the car rental industry is set up online with special respect to SEO, Google rankings and social media performance. 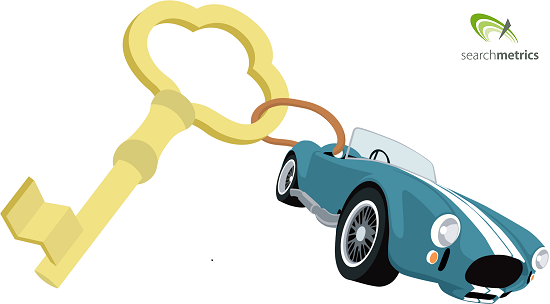 According to recent market data, the estimated revenue of the US car rental market in 2012 amounted about 24 billion dollars*. Renting appears to be the trend. This is also seen in the success of the car sharing segment, which is highly dominated by online and mobile platforms. But it should be noted that these companies were not included in this analysis, because other brands dominate the car rental segment.

As in our recently published SEO Analysis of the air travel industry, we have compiled a relevant set of keywords that includes the major search terms for the sector. Based on these search terms, we investigated which domains in the car rental sector enjoy the greatest visibility – for both aspects of search engine marketing: search engine optimization (SEO) and search engine marketing (SEM). We also examined social media performances on platfoms like Twitter, Facebook and Google+.

And once again, we did not just look at the US market, but also abroad and analyzed how the (online) markets look in Great Britain, France and Germany.

So who has recognized the trend early on and set the necessary wheels in motion for performing well online, using the Internet as a distribution channel in the best way possible? This involves KPIs such as the number and quality of a domain’s backlinks as well as both the number of keywords for which a Google

search returns a given domain and the respective ranking in the search results. Last but not least, the social media performance of a domain/brand plays an important role.

The study can be downloaded here:

Our enormous database, which contains several million keywords and billions of links and social signals, again provided the basis for our conclusions. This data allows us to complete a thorough analysis of the respective industries.

US market: Clear market leader and a large center field

A clear hand has been dealt in the case of the US SEO market for the car rental segment. However, the lower ranking domains do not lag as far behind the leaders as we see later in Germany. In fact, there is a rather large center field characterizing the US market. In general, however, the visibility ratings based on the keyword sets that were analyzed are amazingly low.

With respect to SEM, the US market stands apart from all others. Here we are dealing with what are, relatively speaking, highly sophisticated advertising strategies that usually reflect synergies with the SEO activities of the companies.

Germany: clear leader – and then the rest

Similar to the US, there is also a clear SEO front-runner in Germany. The market is dominated by one purely online company that benefits from its clear focus here. In the other ranks below it, there are several car rental companies that are also well-known for their offline presence.

In terms of advertising, i.e. Google AdWords, a similar picture emerges, astoundingly with the same market leader whereas all other market players seem to focus either on SEO or SEM.

Completely unlike France, where an astoundingly high number of competitors exhibit very high visibility ratings and the peak is consequently broad and conspicuously qualitative, the UK market appears to be somewhat rudimentary in terms of its low visibility index.

Looking at the advertising activities of market players in both countries in the PPC area paints the exact opposite picture, however. In the UK, this is much more pronounced than in France. What is exciting here, too, is that the companies spend their budgets either on SEO or SEM, but do not take a holistic approach – something that might certainly improve overall performance.

Recommendation-based marketing is an increasingly important tool in online business, which is why we also took a look at the social media performance of the domains.

Both domestically and internationally, the specific car rental companies are having a rather hard time on social media sites compared to the major comparison portals. What is clear is that the larger the company or spectrum, the more followers and social signals a market player will generate. 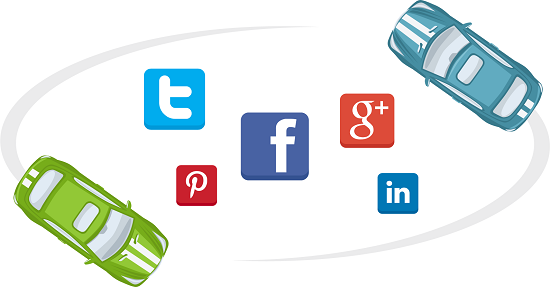 Moreover, no conclusion can be drawn based on the sheer number of signals with respect to the type of these signals. Is it criticism, bashing or perhaps even an outright “shitstorm”? At the very least, there is some data in our study offering a certain degree of room for interpretation between the number of signal producers, on the one hand, and the quality of signals on the other.

Analysis is the first step in optimization

Our white paper also includes other KPIs and detailed analyses, for example, on the link or keyword-based performance of the specific markets and competitors. The report also contains several customer testimonials.

As always, I welcome feedback and suggestions in the comments. “Gentlemen, start your engines!”