That my friends, has to be one if not the most common question we’ve been asked since becoming the stealth marketing martial monks for the folks here at Searchmetrics. If there’s one thing that SEOs want to know, when it comes to tools, it’s… “Where’s this data coming from?”

Pretty graphs are great, but if we don’t know what it means, nor how the data is achieved, it’s useless. I too had this problem when initially getting my head around the groovy graphs here at SM. Fortunately enough whining got me some info to share that should clear this up. 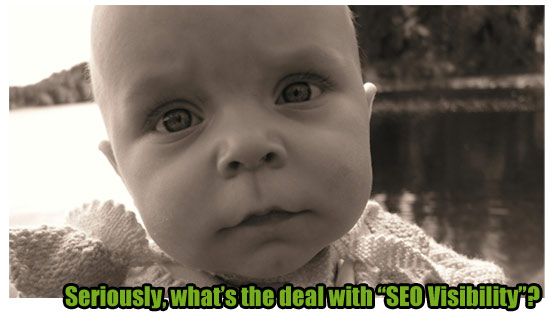 Ok, so what is it exactly?

SEO visibility is essentially monitoring the search performance of your website. They look at selected keywords (by you or generated by our system) for a given search engine ( google.co.uk for example) each week and analyze the results for them.

For the geeky among you, one core elements used is called; Organic Performance Index (OPI). This looks at;

For us, “statistical value of traffic distribution” is based from click bias concepts. That top rankings get more clicks than those lower down. Where a video or image universal gets more in 5th position than a pure textual listing would.

We try to map the keyword sets we analyze both to short head and long tail phrases. So just like it sounds, we’re showing you ‘visibility‘, not actual traffic.

Why Doesn’t It Match My Analytics?

Good question, thanks for asking, (H/T to Joost). Your analytics, even when drilled down to a given search engine, will always be different. That’s because it is reporting ‘traffic‘ not visibility. During the course of a year there are many elements which can affect traffic. But that doesn’t mean your overall rankings/visibility has changed. 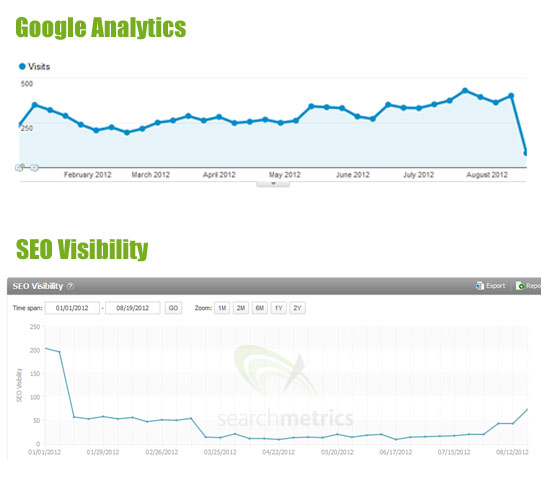 It bears keeping in mind that what one keyword sends in terms of traffic, is different than another. When looking at the ‘SEO Visibility‘ we are looking at more high level data which represents the larger aggregate of visibility in the (chosen engine’s) search results.

What do we do with it?

You’d be best served to think about it as one of the health check benchmarks of a site. It is often the beginning of the journey along the road of site analysis (for SEO). Some things that come to mind include;

And more I’d imagine. Those are just some that we find ourselves commonly using in my company.

One of the handy parts I like, is comparing competitors in a given space. Using Searchmetrics as an example, you can create something like this;

My personal advice is to start playing around with it and see how it works best for your approach.

And now you know

There’s nothing worse than a data set wrapped in mystery. It won’t do us a damned thing. Sure, this might not be the magic bullet to awesome SEO campaigns, but understanding what it is, what it means and how it can be used, should go a long way. It’s a really cool little metric that I have been making use of in a myriad of ways from projects, to post writing and prospect research. Hopefully now you’ll be motivated to embrace it more.

Over the next while we’ll be looking at many other features of the SM offerings and how they work. If you have an element of the software you don’t quite get? Be sure to leave a comment and we’ll churn something out asap to get you headed in the right direction.