A new Panda update has been rolled out by Google, and it’s important to everybody in SEO. So we’ve carried out an immediate analysis, and here are the results.

Update: In order to get this analysis to you as quickly as possible, the data we used was independent of the Suite Software. However, it is included now in the Searchmetrics Suite Research Area, and the data is viewable in the client project area as usual, depending upon your individual update cycles. 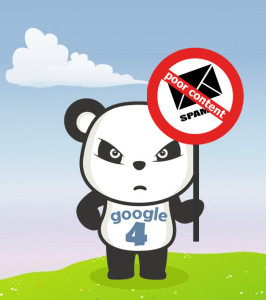 Matt Cutts, Google’s Head of Webspam, announced the release of the Panda 4.0 update via his Twitter feed yesterday. Initially called “Farmer Update”, it was rolled out in the US in February 2011 and globally in August of the same year. The update aims to push pages with poor content and spam from the search results.

This fourth generation of Panda started rolling out yesterday and Searchengineland.com are projecting that it will impact 7.5% of (english) search queries. Other languages may well be affected in differing proportions. As it revealed itself in the SERPs, we decided to take a look at it:

At the same time as Panda 4.0, or even a little earlier (last weekend), “Payday – Loans 2.0” was rolled out. This update is more link-based and focuses on keywords with high search volumes and CPC in which the potential proportion of spam in the SERPs is likely to be very high.

According to Matt Cutts, the proportion of affected searches in the United States was only about 0.3%, so let’s concentrate on Panda here.

After many smaller, almost monthly “refreshes”, the fourth Panda update seems to be a major one. However, according to the rumor mill, this update is more “soft and gentle” than previous ones, and will supposedly serve as a basis for future adjustments to the algorithm.

However, as Matt Cutts announced at last year’s Pubcon in Las Vegas, Google’s future Panda is supposed to be “baked” into the algorithm, it’s surprising that this update comes as a new version when we were not expecting Google to roll it out with such a public announcement.

The following data is based on the organic SEO Visibility for each domain for all researched keywords, compared to our last data point. The actual traffic by each domain – for example brand and/or direct traffic etc. – can vary with values given here.

Since there seems to be another reason for SEO Visibility loss of some domains, next to the Panda update (more on this below), and also some exceptions that I would not call Panda losers, I will call this a preliminary analysis. We will update this article as soon as we had a deeper look into the data, but I wanted to give you some insights right away. So lets start with a provisional lists – please interpret with caution:

The lists are ordered by absolute loss / gain, which is shown in the respective column as rounded percentage. Basis of the analysis are domains that at least had a value of 10000 SEO Visibility before Panda 4.0 and that show now a change of at least +/-20 %.

As expected, the update mainly relates to the content area. In the loser list you will find a strong number of aggregators who mainly ranked with information from external sources – for example in the area of Coupons, News (here especially the celebrity/ gossip sector), Software – or of course price comparism websites. Also, some forums and weather portals are on the list.

On the other hand, we also find some of the aggregators among the winners. Particularly strong are some price and product comparism sites, health pages and some local aggregators. The conclusion is therefore somehow unclear. It is possible that the Panda update is still not fully rolled out, so we will keep you updated.

Next to the mentioned aggregators, we found websites who lost at the directory level where they ranked with result pages. Presumably, this has not directly to do with the Panda update. We are currently working on a separate analysis.

First conclusion : This panda did not only punish

Some sites that should be potentially on the Panda loser list have actually shown a positive development. This could be the “learning from mistakes” (also from others), as some of these candidates have (now) written their own content. The losers on the other hand, tend to show syndicated content or even duplicate content. But this doesn’t mean that this is the end of the update. Google proofed in the past that they are able to perform improvements or rollbacks really fast. So we will see what will happen over the next weeks.

By the way, the Payday-Loan losers can be identified pretty easy -> URL completely removed from the index (it’s more like a link -based loss) or not (rather Panda).

Update: If you want to find out, if your business has been affected by the Panda 4.0 Update, feel free to contact us and get more information on the topic.