Today I have just discovered an article which is a perfect example of how not to interpret data. It’s really misleading so I decided to write a short answer.
So here is the original article.

And here are my responses.

“[…]LinkResearchTools report shows that Groupon has taken an 82% hit on its rankings in the UK and is one of the biggest victims of Google’s latest search algorithm update, Penguin 3.[…]”

I don’t know about you guys but I have never heard of LinkResearchTools before. However I can hypothesise as to what mislead Simon into reaching this conclusion.

Above you can see the top 10 websites that have lost relative visibility since the last update. You can find this table in:

Here are the charts

So you can clearly see that everything looks fine.  Where is that drop then? The article I quoted above presented Groupon.com SEO Visibility in Google.co.uk (instead of Google.com). This is how it looks.

You can see the spike week before.
Let’s calculate the drop.

As well as brand + some random keywords that welt.de ranks in google.co.uk 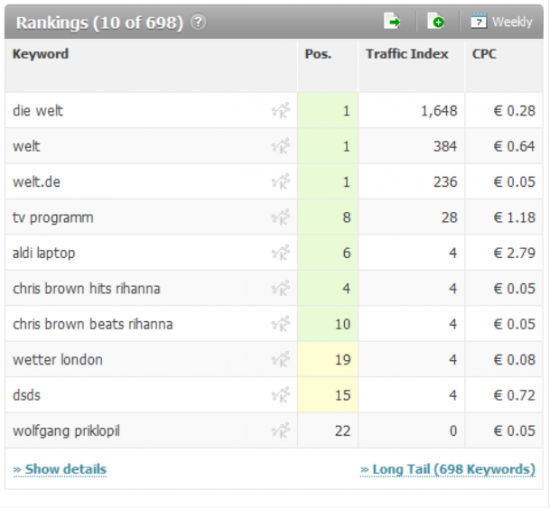 Now let’s go back to article I quoted at the start:
[…]Groupon.com saw an 82% ranking drop in the wake of Google rolling out its Penguin 3 update according to LinkResearchTools. It sits in the company of findaproperty.com, which also fell prey to the search giant’s results pages reshuffle with a -90% change. […]

[…]As for findaproperty.com, Google could be punishing the site for cloaking since its merger with Zoopla earlier this year. The commercial sales and lettings listings website now redirects to Zoopla’s domain and may have tumbled by as much as 77% because of it.[…]

So Simon refers to FindAProperty.com and Zoopla.co.uk – lets check how these two websites appear.

Try to open FindAProperty.com – you will be redirected to Zoopla.co.uk.
Digital Property Group and Zoopla merged in mid 2012.
And this is clearly visible when Zoopla decided to redirect FindAProperty.

So it’s not a “punishment”.

Other examples:
UpMyStreet (blue) and Zoopla.co.uk (green). Drop in visibility of UpMyStreet and boost in Zoopla is because of redirection. (UK Market)

So once again the article I referred to was really misleading. This is why I decided to prepare this short response highlighting the importance of data handling and detailing various pitfalls that the unwary may stumble across.