For the last few weeks Dave and I have been talking about a way of changing the way SEO’s look at link building. If you haven’t noticed most of the posts on SEO in 2013 discuss how the role of links (Linkgraph) and social (the Socialgraph) in Search Engine Algorithms is changing what SEO’s need to do to raise ranks. When I say Search Engines well that is about 80% Google so, if you are using the marketers 80/20 rule then you think Google is for the most part Search Engines.

So what is graph visibility? It’s a measurement of visibility across the Socialgraph, Linkgraph and Knowledgegraph. A while back Dave and I did a Podcast with Bill Slawski called Beyond the Linkgraph which was done right after the Knowledgegraph SERP had been announced/released by Google. One of the themes throughout the show was how the Linkgraph was being de-emphasized and cleaned up by Google.

Remember this was at a time when Panda had dampened link equity coming from article marketing, UGC and other SEO faves for foundational link building and Penguin was dampening “keyword rich links”. This was before the EMD update which dampened anchors to exact match domains. That was when I started using content strategies that consider maximum Graph visibility as the goal.

Manipulating The Graphs for Maximum Visibility

The Linkgraph is well documented and currently it’s value and role are being de-emphasized by filters and subsequent dampening of the Linkgraph signals. The Socialgraph’s buzz is a huge part in triggering the temporal/behavioral sensitivity in Google SERPs and Knowledgraph is a SERP unto itself! 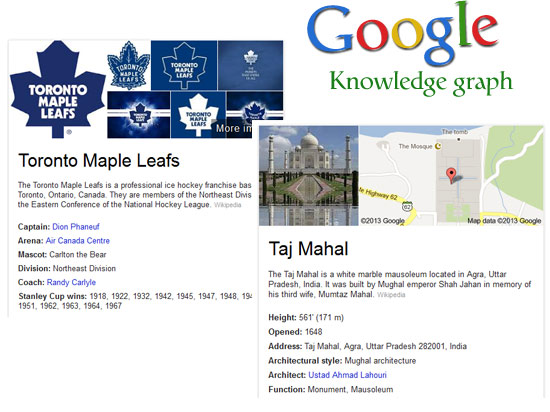 Knowledgegraph can be the easiest or hardest to gain visibility because there are so few opportunities. The opportunities lie in the SERP itself! A Knowledgegraph result is based on things relevant to an entity. So for the Toronto Maple Leafs (go buds!) that would include information pertinent to the team history, players and “activities” associated with games like game tickets and amenity information, hrs etc. The type of content and information included in the SERP are where the opportunities can be found.

Knowledgegraph SERPs are rich in media so naturally align with content strategies for Universal Search with the image, video, news and local elements playing a role in the makeup of the SERP. I can’t remember seeing a map but there is lots of local flavor to Knowledgegraph results. SEO’s who take a SERP Out perspective on ranking now have an advantage because they have been building content that is trying to trigger elements in Universal Search for years. These SEO’s are very tuned to the temporal nature of SERPs and therefore have been using Social Buzz to trigger inclusion for their rich media content in Universal SERPs.

Currently the Linkgraph de-emphasis and cleanup has many SEO’s scrambling to disavow and remove links from link profiles with 10’s of thousands of links likely for the most part ignored by Google. In cleaning these up one of the surprising things was the lack of movement in rankings (unless it is Penguin/anchor related) when you start stripping away the unwanted links.

There are some cases we have seen when a penalty is in place that removing/disavowing links does help but that is almost always a manual penalty like Unnatural Linking messages. Penguin is not a penalty, it is a dampener/filter! Your techniques to combat/avoid dampening are not about changing to different techniques, but rather, the change in ratio of foundational to natural links from authority sites. Quantity of links is not a big deal the Who What and Where is where it’s at Jack!

Outreach is evolving because the new Google algos are just ignoring blogs that are obviously “for sale”. When we look at these sites with manual penalties and many have obvious footprints that appear to be blog networks. If SEO tools can uncover multiple networkst or a knowledgeable SEO can with a few searches on Google, a report from Majestic and review of a few of the blogs homepages!

Basically you can see the footprint in the front page of the “guesting blogs”. It seemed as if they followed each other around or were entities or multiple entities tracking by topic or author. Though with offshore SEO’s it is more likely to be unsophisticated implementation. One list of blogs I was given contained over 100 password and username combos to log in and edit and remove links. Yes folks…not one worked!

In the end I’m sure Google’s tools are better than anything SEO’s have cuz, well, Google have the whole Link index that counts don’t they? More importantly they have the index of links that don’t count, “the Master” disavow list and ignored links!;-)

The Socialgraph: The Noise in Your Site’s Signal to Noise Ratio!

Over the years I’ve referred to the quality of information by an entity/site in terms of signal to noise. The signal, in the signal to noise ratio, is the information. The quality/strength of the signal is the user’s “perceived value” partially represented by links (linkgraph), Shares and Likes on Google+ and possibly reading shares and likes on sites.

SEO Future Proofing: There was a time when it seemed like links in twitter feeds placed on sites were indexed, however, with so few Twitter results showing in the results it seems that, though indexable, the mighty Google ignores them, so, there is reason to doubt Google will care in the future, if they do care now, about shares and likes indexed on sites they will care much less in the future. Why would Google care when it has Google+ with profiles attached that no other engine has access to!

The Socialgraph is a huge component in triggering the temporal nature of Google SERPs. Social Signals from blogs and news; “buzz” engagement on YouTube and it’s Google+ Network are triggers to entering and owning a Universal SERP for short periods of time and maintaining enhanced SERP visibility thereafter! Google is rewarding the use of rich media. Leverage your rich media content with foundational link building techniques, outreach and down your Social channels. Multiple embeds of images and video by other sites, content aggregators and Social networks are signals though not like links did in their heydays.

The correlation of Social Signals to ranking on Google are undeniable but not causative. Looking at how the signal could be amplified it is evident quantity is less of a signal, rather, it is more about the entity sending the signal and where the signal is sent that counts. The entity will be a bigger key to success than in the past so identifying and establishing semantic relationships with entities and using author snippets in results. The fact Google is/was using user behavior to return more results for a specific author based on a click and likelihood it was read illustrates Google’s interests in basing some part of results on user behavior.

Every day it becomes more evident that visibility on as many of the above graphs as possible is important. The Scoialgraph is a key to the temporal elements in SERPs. These signals verify freshness and helps measure the quality of your content. The linkgraph is evolving toward a true citation signal indicating relationship between entities and topics rather than a reflection of promotion. The Knowledgegraph is like a direct result of the link and socialgraph changes.

Now when you think about supporting your content don’t think in terms of link visibility but more along the lines of what is my graph visibility and where are the opportunities to raise visibility on the graphs most affecting the SERP you are trying to affect!