“Will you be my Valentine?”

The heart may want what it wants, but how we choose to demonstrate love (or lust) for a significant other isn’t universal on Valentine’s Day. As people load up Cupid’s arrow, I decided to take a gander through our massive search database to see if I could suss out any differences in approach both the US and around the world to Valentine’s Day. Guess what? That data shows Valentine’s Day takes many forms worldwide. Hopefully, you’ll find the results as interesting as I did. 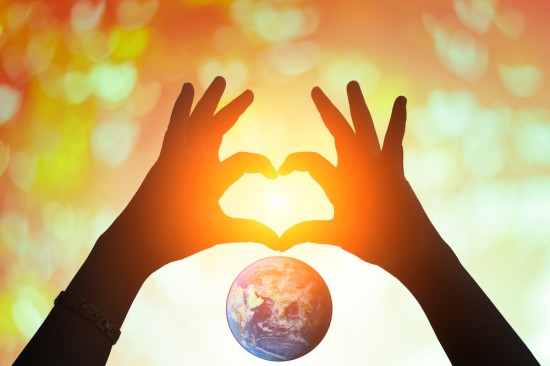 Americans tend to be very invested in searching for chocolates, flowers, lingerie and engagement rings (all of them!) for the Feast of Saint Valentine, followed by the U.K., Australia, Canada and South Africa, we’ve found in an analysis of Searchmetrics keyword and Google trends data. The French and Germans? Not so much!

On top of the heat chart above showing the level of countries’ search interest in Valentine’s Day, I came across this buying pattern for consumers in the US, which shows search preferences for the two top gifts lining up depending on where you live.

Yes, Money Can Buy You Love

U.S. consumers will spend an average of $136.57 this year on Valentine’s Day gifts, experiences and other purchases, down from a record high of $146.84 last year, according to an annual survey from the National Retail Federation. Total spending will decrease this year to $18.2 billion from a record $19.7 billion, according to the 2017 study, which was conducted for the group by Prosper Insights.

By contrast, British shoppers last year spent about $56 on significant others, according to an analysis by payments firm Worldpay. Germans appear to be so bah-humbug about Valentine’s Day that it’s hard to get exact figures on what people spend – though news reports have suggested it’s about $20. Some of my German colleagues will attest to that!

Perhaps not surprisingly, chocolate is a big winner around the world, with searches spiking in January and February for terms such as “chocolate,” “chocolate covered strawberries,” “chocolate brownies” and “chocolate cake.” The world has one giant sweet tooth, with Switzerland, Germany, Ireland, the UK  and Norway leading in consuming the most per capita, according to 2015 candy industry statistics.

Yet it’s the US, which barely makes the top 10 per annual consumption, that represents a Valentine’s Day bonanza for online merchants. An estimated 70 percent of Americans will give the gift of chocolate or candy for Valentine’s Day, sharing with between one to three loved ones, according to a national survey by the National Confectioners Association.

A Rose by Any Other Name

Flowers seems to be the faithful standby the world over. Men and women tend to look to send flowers online in February and again in May, for Mother’s Day.

Yet Germans and the English are far more likely to make their purchases offline, in local shops. An interesting difference between the US and Germany is an increased emphasis on CTAs within the German SERPs. Google.com in the US features more images and information to keep hapless shoppers from getting uninspiring bouquets thrown back in their faces. I cut images from the chart below to show some of the US informational SERPs, compared to the following German SERPs.

Given the smaller subset of people who actually order for online delivery, top players and pursuers are pretty evident in Germany based on visibility.

Put a Ring on It?

Since the 1980s, the number of people getting married has fallen steadily. If search interest in “engagement rings” during one of the more romantic occasions of the year is any indication, that’s not going to change anytime soon. In the four countries – the US, France, Germany and the UK – that I singled out for review for a search of “engagement rings,” only the French seemed to think Valentine’s Day an occasion worthy of a ring.

The chart below shows few peaks over January and February in a three-year period with the exception of France. That said, interest for “engagement rings” in France is far lower than the rest of the world. Having lived for many years in France, I can certainly attest to that!

…though shoppers in the U.K. aren’t as sold as Americans above…

…while Germans are even less so:

Speaking of jewelry and engagement rings – while the interest isn’t as high as chocolate or flowers, let’s still have a look at U.S. companies poised to win from Valentines Day.

How do I love thee?

Besides flowers, Europeans in particular appear to think the best things in life are free. Given that some of the world’s best-known writers and poets are British, I followed a hunch to see if cribbing some ideas from the love poem might be a popular undertaking. Lo and behold, looks like I am right! Searches for “love poems” are not relatively steady throughout the year – it spikes at 100% ahead of Valentines day! 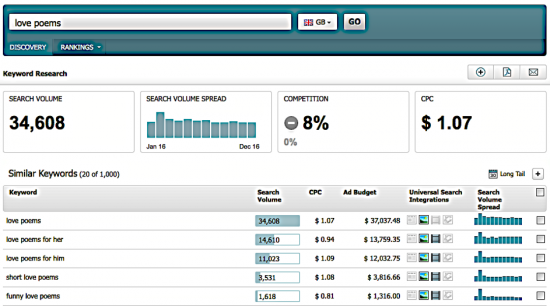 It seems Germans are just as efficient (if not more so!) in searching for liebesgedicte, or love poems, though it looks like they look for literary inspiration in particular during the colder months of the year: 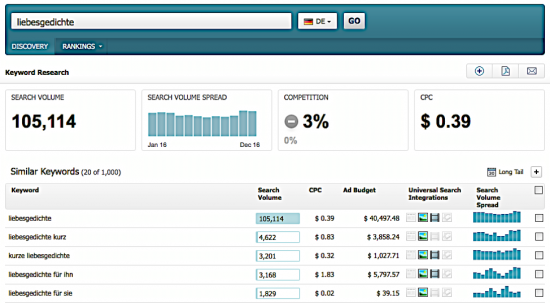 Sexy and she knows it

Lingerie may be a guy’s gift to himself on Valentine’s Day in the U.S., but not so much in our other representative countries. Germans actually are more likely to show purchase intent for lingerie around the Christmas shopping period.

Amor vincent omnia? Does love conquer all? One thing is clear: while people the world over may surrender to love, search data shows we do it in many different ways.