In recent years, Google seems to have overtaken devices of all types, serving as the default search engine on the most popular web browsers. This position can partly be blamed for Google’s continuing domination of search engine market share, with top competitor Bing unable to gain traction. 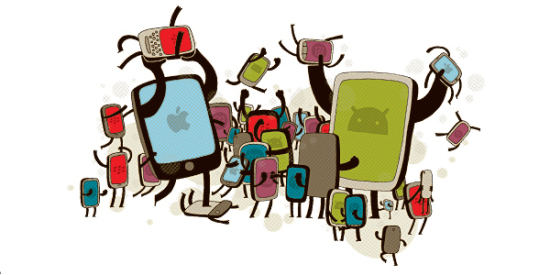 At the heart of things is a rivalry between Google and Apple, which seems to explain the absence of Google Maps and YouTube on brand new installs of iPhones. The company chose to instead develop its own navigation program, Apple Maps, and work hard to win Google Maps users over.

Both Microsoft and Yahoo! have reportedly approached Apple about making the switch to their own search engines once the contract with Google expires. By taking a spot as the default search engine on iOS devices, either search engine could gain a big market boost, potentially allowing it to take part of Google’s majority share.

Of course, if past behavior is an indicator, Apple could be devising a search engine of its own. Hopefully its launch will go a little more smoothly than the 2012 launch of Apple Maps, which resulted in the help desk being flooded with complaints. By launching its own search engine, Apple could go after Google’s search engine market share, but would inclusion in iOS devices be enough to make a difference?

Welcoming external search engines brings in money! Google reportedly paid Apple $82 million in 2009 to remain its default, but that amount reportedly increased to $1 billion in 2014. If Apple can get that same figure from Microsoft or Yahoo!, it may be worth continuing the partnership with another company.

Bing is already part of iOS searches when a user launches it using Siri. In 2013, Apple chose to replace its default search results with Bing results for Siri searches. If a user wants the search to be conducted using Google, he must specify, “Search Google” with his request.

While Bing looks to be the likely choice, since the search engine has already been chosen as the Spotlight search provider in newer versions of the OS. However, Marissa Mayer has reportedly stated that she hopes the company will choose Yahoo! as the default provider.

Since Mayer already successfully negotiated a similar deal with Firefox, the possibility of a win for Yahoo! isn’t out of the question yet. As Yahoo! continues to struggle to compete with other technology giants, a win like this could make a big difference, helping Mayer prove Yahoo! is still a serious contender.

Whether Apple goes with Bing, Yahoo!, or its own search engine, users will simply need to take a few extra steps to change the default search engine in Safari. Similar extra steps can be completed in Internet Explorer, Google Chrome, or Firefox, allowing users to have exactly the default browser they want, regardless of what the technology companies decide.

For the longest time default search engine were a tool to gain users. As changes start to impact long time incumbents’ use, new patters begin to emerge. For example, when sharing an address, I share Google map links to avoid Apple maps from loading by default. If the door can be opened for Yahoo! and Apple to gain market share it could disrupt the search marketing landscape. Although no one feature or search engine will overtake Google’s market dominance, the impact of all these small changes could play a role.